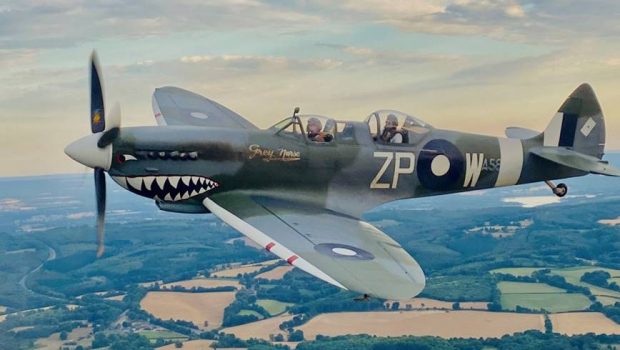 Spitfire TE308 was built at Castle Bromwich on the outskirts of Birmingham and delivered to #39 Maintenance Unit at RAF Colerne in the summer of 1945. This ‘low back’ Mk IXe single seat Spitfire never saw combat and ended the second world war in storage where it remained until 1950. It was then transferred to another Maintenance Unit #29 in High Ercall, Shropshire, before being sold to Vickers-Armstrongs Ltd.

After the war, TE308 was selected as part of a batch of single seater Spitfires to be converted to two-cockpit armed training aircraft, which were destined to be sold to other countries around the world. It is believed TE308 was destined for Egypt but the sale never took place.

Following the T9 two seat conversion, TE308 joined five other two seat Spitfires which were sent to the Irish Air Corps (IAC) in 1951. TE308 was marked as ‘163’ in the distinctive Irish green colours. Following decommissioning in 1968 the aircraft was purchased, overhauled, registered as G-AWGB and then leased to Spitfire Productions Ltd for use in filming ‘The Battle of Britain’ with stints in the UK and France.

Following a period of storage and changes of ownership in the UK, TE308 was purchased by Canadian businessmen Don Plumb and Jerry Billing who refurbished the aircraft in Ontario. Flown initially in a 2 seater configuration and then with a fairing that covered the rear cockpit.

Further changes of ownership saw the aircraft move to transport museums in Maine and Arizona. In 1983 the aircraft moved to Aspen, Colorado and was a regular on the North American display circuit for 25 years. Following a ground collision with a Hurricane in Texas in 2008, the aircraft was restored in Colorado before being purchased by Warbird Experiences Ltd of Biggin Hill where it was comprehensively inspected and overhauled.

With an absence of affiliation to an active RAF combat squadron it was decided to do something more unusual with the livery of this aircraft. TE308 currently flies in homage to the striking designs carried by the 457 Squadron, Royal Australian Air Force. All of the squadron’s Spitfires were painted with a shark’s mouth, giving them the nickname of the ‘Grey Nurse Squadron’. The Squadron had some notable characters including Pete Brothers, Clive ‘Killer’ Caldwell and Bruce Watson.

Initially formed in 1941 and based in Southern England under Sqn. Leader Pete Brothers, the Squadron flew missions over Nazi-occupied France, before being formed almost exclusively by Australian pilots and crew later transferring to Darwin as part of No.1 wing RAAF, seeing action in the South Pacific. Later moving to Morotai (Indonesia) and Labuan (Malaysia) it took part in operations against the Empire of Japan before being disbanded on November 7th 1945. Proudly carrying the registration A58-606 and the squadron code ZP-W as flown by 457 Sqn. Leader Bruce Watson, TE308 pays respect to all RAAF and RAF Spitfire pilots.