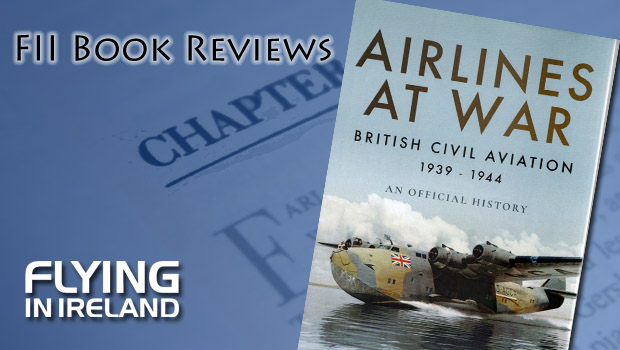 In the 1940s HMSO produced a series of paperback Official Histories of different aspects of the Second World War, I have two original copies, one on Bomber Command, published in 1941 at a price of one and sixpence and the other from 1942 on Coastal Command, which cost two shillings. They are valuable contemporary records but, naturally, were produced to austerity standards as regards the quality of paper and photographic reproduction. Air World Books, which is an imprint of Pen & Sword, is to be congratulated for what is more of a re-boot than a facsimile, with the substitution of a hard cover, much better quality paper and the addition of a number of high-quality photos sourced from the US Library of Congress and the Historic Military Press. The front cover is particularly appealing, as it is an extremely well colourised reproduction of an original monochrome photo of a Boeing Model 314A flying-boat landing on the water at Lagos. You can compare it with the original on page 144.

When the war began, civil aviation was taken under government control, including Imperial Airways, which was soon to be merged with British Airways as BOAC, with a fleet of 82 aircraft of nine types. Imperial had built up considerable experience of surveying and then plying long-distance air routes from the 1920s onwards, and would soon be needed in this vital role. Before that, the immediate priority was to take personnel and stores to France and then to assist the movement of engineers and stores preparatory to the Battle of Britain. The 4-engine Armstrong Whitworth Ensigns were particularly useful in these tasks. Essential over-water internal flights within the UK and to Dublin were controlled by the Associated Airways Joint Committee, with a fleet of 20 de Havilland biplanes, formally used by domestic carriers in the 1930s. Another important development was the establishment of major engine overhaul and repair facilities in Wales, using a nucleus of airline engineers.

The longest route was the ‘Horseshoe’ by both seaplane and landplane from Britain to Durban, through India to Australia, which is illustrated by the map on page 50 and is beautifully described. Indeed the evocative and sometimes lyrical tone of the text grips the reader’s interest. This is no dry official tome and is both exciting and inspiring.

With the Mediterranean becoming ever more dangerous the vital supply route to Egypt was maintained by a service through Central Africa. This not only involved very skilful piloting and navigation but also, as the author points out, ‘airline operations of any kind depend fundamentally upon the engineers.’ To which may be added the expert but unsung managers, clerks and traffic men. The establishment of a multi-national engineering base at Asmara in Eritrea is quite remarkable. Civil aircraft also played a valiant role in the evacuation of Crete and in the preservation of Malta as a thorn in the enemy’s side.

The story is absolutely staggering – West Africa became one of the most important aerial junctions in the world, with the creation of 40 airfields, landing grounds and flying-boat stations in The Gambia, Sierra Leone, the Gold Coast and Nigeria.

To describe the conquest of the North Atlantic, the author looks back briefly at the steps taken before the war for civil aviation, with developments in Britain, Ireland the USA and Canada. There are also highly atmospheric accounts of transatlantic flying in the depths of war from Poole to Foynes in Short S.26 Golden Hind and onwards to New York in the Boeing 314A, Berwick. Irishman JC Kelly-Rogers commanded the Boeing Flight for BOAC and was also the pilot when Winston Churchill flew across – another trip that is described in some detail.

The North Atlantic Ferry of bombers to Britain is also covered, as is the ball bearing run from Sweden, Prestwick to Moscow and 28 hours non-stop by Catalina from Perth to Ceylon.

I could go on but would not wish to spoil the readers’ pleasure in discovering the contents for themselves. Quite simply, this book is enthralling; I enjoyed every page of it.