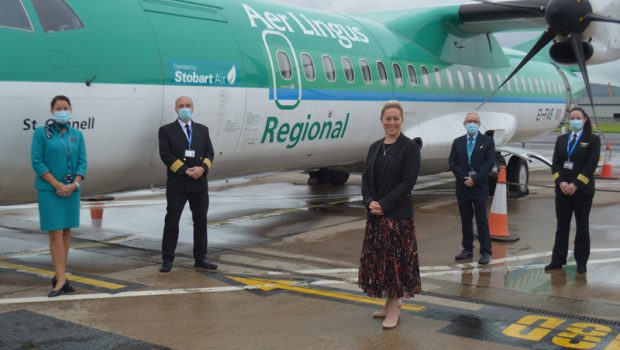 Aer Lingus Regional has begun the first of six new routes from George Best Belfast City Airport. The service to Edinburgh, operated by Stobart Air, will connect passengers from Northern Ireland to the Scottish capital up to three times daily. The other routes that will be operated by Aer Lingus Regional from Belfast City are Birmingham, East Midlands, Exeter, Leeds Bradford and Manchester. The inaugural service was operated on an ATR72-600 aircraft, of which five are now based at Belfast City Airport and will be used to service these six new routes.

Katy Best, Commercial Director at Belfast City Airport, said: “Edinburgh has always been a very popular route from Belfast City, and we are delighted Aer Lingus Regional has re-established this service since it was left vacant by Flybe.

“Like many industries, the aviation market has had a challenging 2020 in light of Covid-19. However, ensuring essential connectivity remains in place was a key priority for us and that is what we have achieved with Aer Lingus Regional. Having already enjoyed eight successful years with Aer Lingus on our London Heathrow service, we are looking forward to working with the airline again, in partnership with Stobart Air, to further grow and strengthen our route network.”

“Stobart Air has worked hard over the past number of months to protect our airline during challenging times and to position us for the future. The launch of this service from Belfast is part of that. This new Aer Lingus Regional route will facilitate key links and connectivity between Belfast and Edinburgh and will ensure we provide choice, value and convenience for our customers. We look forward to welcoming our passengers on board this new Belfast-Edinburgh route.”