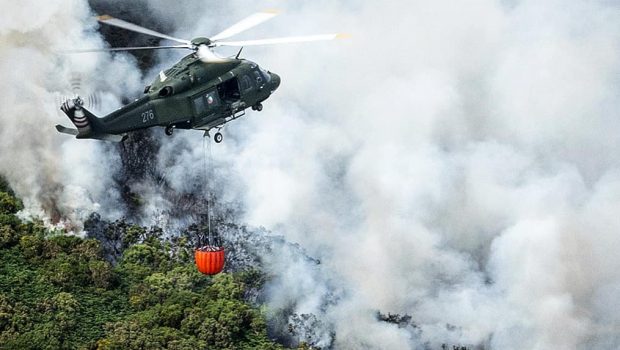 No.3 Operations Wing of the Irish Air Corps have had a busy June Bank Holiday weekend assisting with forest fires around the country. Two AW139’s have been involved fighting fires in Sligo, the Burren National Park in Co. Clare and Hortland Wood in Co. Kildare. Both aircraft are fitted with a Bambi Bucket, which can attached to the cargo hook underneath the AW139 and has a cargo capacity of 1200 litres. The crew usually collect the water from nearby lakes and rivers and drop it on the fire.

All helicopters in the Air Corps operate under No.3 Ops Wing and other essential tasks also took place over the weekend including a lifesaving air ambulance transfer from Cork to Dublin using the H135. The EAS, Emergency Aeromedical Service, continues to operate from Custume Barracks in Athlone using another AW139 while the Garda Air Support Unit crews are maintaining a 24/7 presence with their two H135 aircraft.

‪No.3 Operations Wing are currently deployed to a fire in the Enfield area ‬ ‪The AW139 is capable of dropping 1200 litres from its Bambi bucket‬ ‪Please keep all drones away from the area as these pose a flight safety risk to our crews!‬ ‪ #StrengthenTheNation