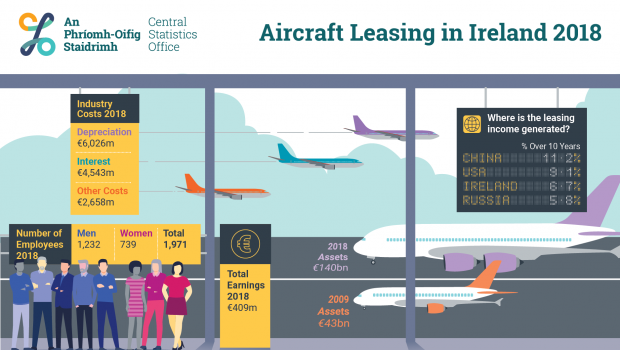 The Central Statistics Office have published a report on the growth of the aircraft leasing industry in Ireland from 2009 to 2018, the latest year for which figures are available. Persons employed in the industry have increased by almost 175% between 2009 and 2018, while total earnings have increased by just under 400%. Full-time equivalent employees1 have increased from 629 in 2009 to 1,620 in 2018. The average annual earnings per person engaged in the industry has gone from €113k in 2009 to €208k in 2018.

Female participation in the industry has fluctuated around 40% since 2009, but fell to its lowest level in 2018, the latest year under investigation. While the average age attained (at year end) for females has risen 37 to 38, the average age attained of males has fallen from 42 to 40 over the period. Average annual earnings per female employed in the industry has increased 36% during the period, growing from €68k to €92k. During the same period, average annual earnings per male employed in the industry, has risen 91% from around €145k to €277k.

Aircraft leasing companies have earned the majority of their income in their primary activity of the operational leasing of aircraft. This activity has generated almost €87bn for the industry for the total period, rising 265% from €4.2bn in 2009 to €15.2bn in 2018. However, other sources of income raised almost €2.9bn in a single year (2017). These sources include fees & commissions and interest & dividends. In 2016, 12.2% of all income came from sources other than aircraft leasing, its lowest over the 10 year period. Over €18bn (17%) of income came from sources other than the primary activity between 2009 and 2018.

At more than €6bn in 2018, the highest cost to the industry has been depreciation, an accounting cost which reflects the reduction in value of the aircraft leased by the company, over its useful life. This is followed by interest, which in 2018 was €4.5bn.

Tax paid by aircraft leasing firms has been somewhat volatile over the decade. More than €2.2bn has been paid during the period, with over 96% of this paid in Ireland. An average of €223m per year was paid, with €589m the most paid in a single year (2018). The figure in 2018 was over 26% all tax paid during the decade. Tax paid as a percentage of profits before tax was at its highest in 2009, at just over 14%.

The full report can be read here.