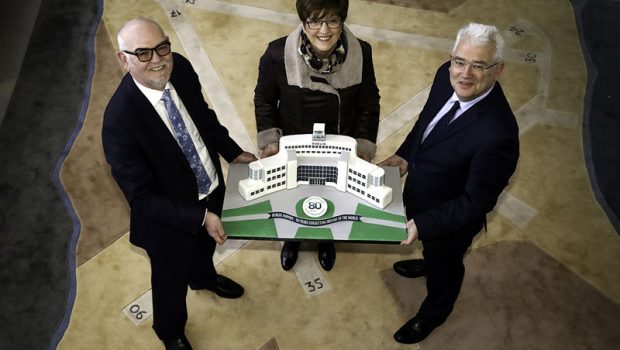 Airport operations commenced with just a single flight on its opening day. Today the airport handles 31.5 million passengers and about 233,000 take offs and landings per year. Dublin Airport has come a long way in those 80 years, according to Dublin Airport Managing Director Vincent Harrison. “From one flight twice-weekly to one destination in 1940 to 700 flights daily, with direct services to more than 190 destinations in 42 countries, Dublin Airport is a thriving hub of economic activity, a significant employer and contributor to the exchequer.”

“While the scale of Dublin Airport has changed dramatically over the past 80 years, the core of what the airport does has remained exactly the same throughout that period,” according to Mr Harrison. “Dublin Airport connects Ireland to the world, and we bring people together; for business, for pleasure, at times of sadness, and at times of joy.”

Dublin Airport was originally known as Collinstown Airport, as it was located in the townland of Collinstown, north of Dublin city centre. Collinstown had been used as a British Royal Flying Corps and RAF base between 1917 and 1922 but had fallen into disrepair before being selected as the site for the new Dublin Airport in late 1936. 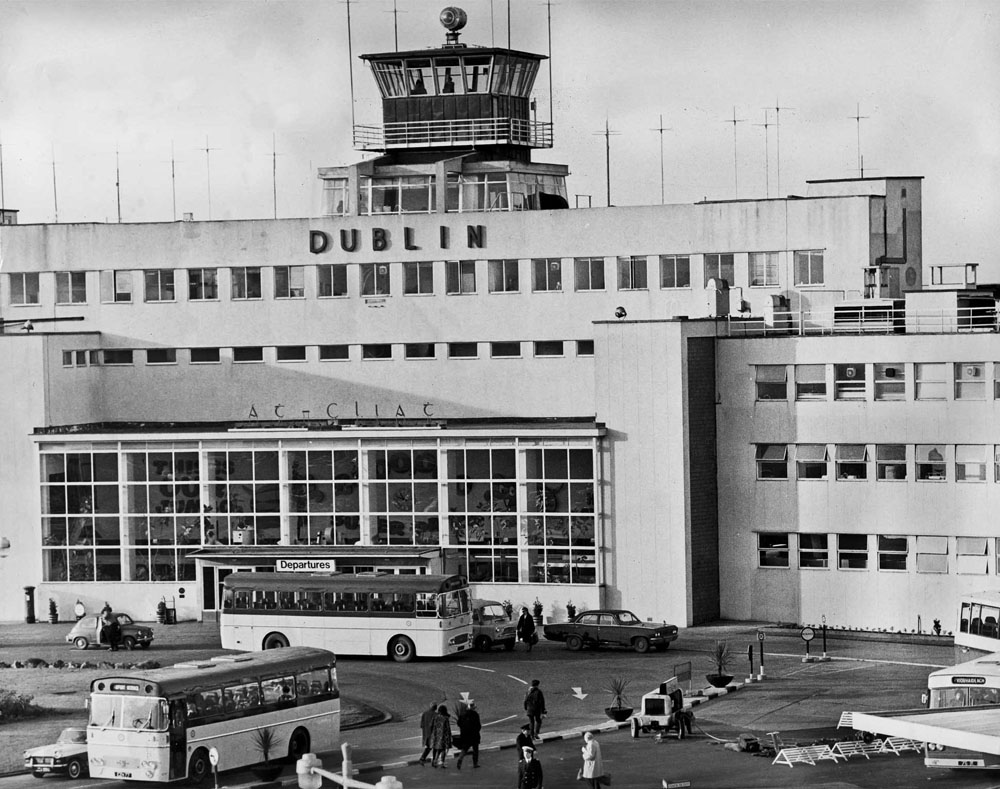 Work began on the airport site in 1937, as more land was acquired, and site clearance commenced for the new grass runways. Construction of the new terminal building started in the summer of 1938.

The architect of the terminal was Desmond FitzGerald, an elder brother of former Taoiseach, Dr Garret FitzGerald, who led a team of young architects. The curved building and its tiered structure, which echoed the lines of a great ocean liner, won many architectural awards for its design.

Collinstown Airport remained relatively quiet during the 1940s, as war raged throughout Europe. However, Aer Lingus continued to operate a twice-weekly service to Liverpool. During this period, Dublin Airport was required to observe black-outs and anti-aircraft guns were in place for defensive purposes.

By 1947, flights departing from Dublin ventured as far as Europe with Dutch airline KLM beginning the first continental service to Dublin. New concrete runways were completed in 1948, and in 1950, after ten years in operation the airport had been used by a total of 920,000 passengers.

Air travel was the preserve of the wealthy during this period and many Dubliners would have travelled to the airport simply as a treat to see the aircraft. The terminal building also boasted one of Dublin’s best restaurants, the Collar of Gold, which was hugely popular and not only for those travelling.

As Dublin Airport’s route network grew and its passenger numbers expanded it, it became clear that the original terminal building had far exceeded its capacity. The North Terminal opened in 1959 and was used to process arriving passengers, while the old terminal remained for in place for departing passengers. 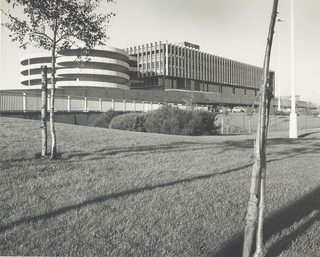 The terminal, now known as T1 shortly after its opening in 1972.

By 1963, Dublin Airport had grown to one million passengers per year and additional facilities were again required. New boarding gate areas were added in the 1960s and work on a new terminal building began in 1969.  The new terminal building, now known as Terminal 1, opened in 1972 and was originally designed to cater for six million passengers per year.

In November 1985, the Government approved the construction of a new runway at Dublin Airport, together with new taxiways, and a new air traffic control building. The new runway 10/28 officially opened for flights on June 21, 1989. That year, more than five million passengers used Dublin Airport.

Passenger numbers increased to 5.8 million in 1992 and following 17 consecutive years of growth, reached 23.5 million in 2008. Facilities however had not kept pace with the passenger growth and between 2007 and 2010 Dublin Airport embarked on a major investment programme to transform the airport by significantly increasing capacity and dramatically improving the passenger experience.

This programme delivered Terminal 2, two new boarding gate areas (the 100 gates and the 400 gates), a new road network, and a host of other major improvements. The new terminal was opened in November 2010. The economic downturn saw passenger numbers decline to 18.4 million in 2010, before eight consecutive years of growth boosted them to 31.5 million by 2018.

Dublin Airport has hosted many dignitaries and special homecomings during its 80-year history. It has welcomed seven US Presidents, two Popes, the return of many Irish Olympic medal winners, a host of Eurovision winners, the Irish football team returning from World Cups and European Championships, and the Irish rugby team with the Grand Slam trophy.

This summer Dublin Airport will have 13 new routes and services including two new long-haul destinations, with Juneyao Airlines launching a twice-weekly service to Shanghai via Helsinki and United Airlines operating a new year-round daily service to San Francisco.

Dublin Airport’s short-haul network is also expanding, with 11 new summer services to the following destinations: Brindisi and Verona in Italy, Marseille and Toulouse in France, Alghero in Sardinia, Tel Aviv in Israel, Billund in Denmark, Podgorica in Montenegro, the Balearic Island of Menorca, Palanga in Lithuania and the Egyptian capital Cairo.

A timeline of Dublin Airport

1936 Irish Government announces plans for a civilian airport at Collinstown

2016 Plans announced to proceed with a new North Runway

2019 First sod is turned on the new runway site

The Aviation Regulator has earmarked close to €1.3bn worth of Dublin Airport projects for assessment as part of its new ‘StageGate’ monitoring process.  The 17 projects identified for entry into the process include a €300m Pier 5, a €170m tunnel under a runway to provide access to the airport’s west apron, and €200m to upgrade baggage screening in both terminals. Siemens Logistics has won a bid to modernise the hold baggage screening system (HBS) at T2 of Dublin Airport. Siemens Logistics will replace the present HBS, which comprises 6 km of conveyor and an automated sorting system. The contract also requires the company to install an additional line to increase the system’s capacity.

The Regulator intends to award a contract to a suitably qualified partner later this month to help it undertake an ongoing cost assessment of the projects over a five- year period.  That assessment is expected to begin next month. The daa is planning to hire a firm to oversee project management and logistics of its capital investment programme (CIP) to ensure that the works cause minimal impact at the gateway. However it cautioned that the CIP is subject to review after the unexpectedly low cap on airport charges proposed by the Commission for Aviation Regulation. 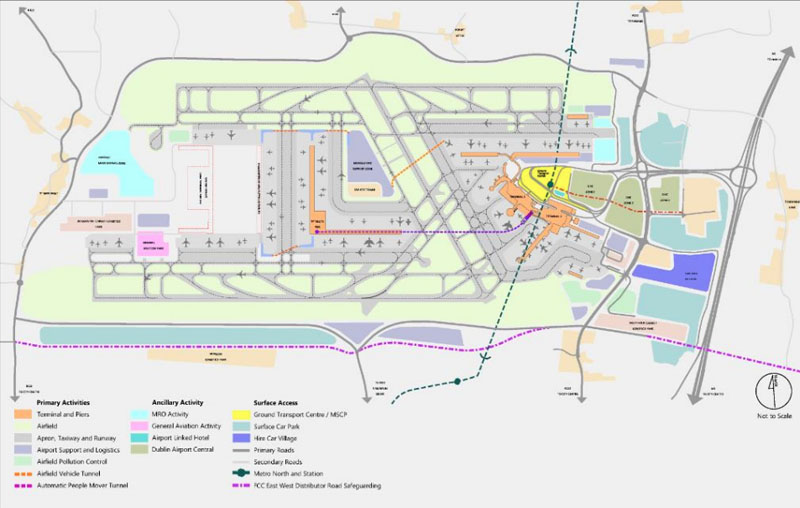 daa is seeking offers from potential providers of a remote bag drop service for passengers at Dublin Airport as an enhancement of its existing customer services.

The system is already in operation in other cities — the company AirPortr has been operating a luggage pick-up service that began in London in 2016. In that case, a company representative comes to the person’s hotel or home with a hand-held scale and asks to see the passenger’s travel details before taking their luggage away. Passengers pay about €33 for the service. daa said it believed the provider of the remote drop-off service might operate a number of ‘hubs’ in the greater Dublin region.

daa hopes a trial by a delivery company or courier service can be carried out over the spring and summer of 2020. The bag-drop service, which has a working name of Offload, is a new development from Dublin Airport’s Future Factory innovation hub.

Main photo: Dublin Airport’s Managing Director Vincent Harrison (R) with two of the airport’s longest serving employees, John Sealy and Elaine Adams, who together have almost 90 years of service with the company.