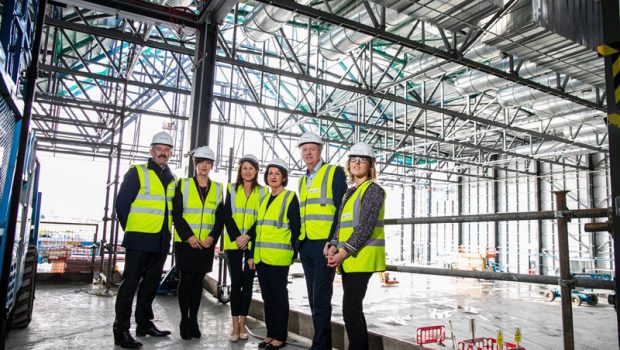 New Shannon Hangar on Track for Completion by Year End

Shannon Group plc is on target to complete a new €18 million, 92,000 sq ft specialist aircraft painting hangar at Shannon Airport, adjacent to Shannon Free Zone by the end of 2019. Over 150 jobs have been created during the 14 month construction phase.

The construction of the wide-body hangar is Shannon Group’s largest construction project to-date and will be Ireland’s first aircraft hangar to be developed at Shannon in almost 20 years. Shannon Group will lease the hangar to IAC – International Aerospace Coating, a leading global aircraft painting, interiors and graphics specialist.

The project involves the construction of a steel framed wide-body aircraft paint hangar and internal ancillary office space, workshops, plant rooms and storage space within the airport lands at Shannon Airport. The new hangar will be the only hangar in Ireland with the capability to accommodate multiple aircraft types up to and including, the Airbus A380. Over 190 metres of new taxiway to facilitate aircraft movements is also being undertaken as part of the project.

“Commenting on the reason for developing the new hangar Mary Considine, CEO, Shannon Group said: “Shannon Airport has the largest hangar footprint of any Irish airport, with nine hangars. These are fully occupied and this project is being undertaken to meet demand for additional space and fulfil our role in growing and expanding Shannon’s cluster of aviation businesses.

“The development of such a major project demonstrates our commitment in this respect, and is part of an overall €100 million investment programme which the Group will have delivered for the region by the end of this year.”

The project is being delivered by Shannon Group and is partially financed by a loan from the Ireland Strategic Investment Fund (ISIF) whose mandate is to support regional development and economic activity in Ireland on a commercial basis.

“We are very grateful for the ISIF support and the support they have shown for the aviation sector, particularly in Shannon,” said Ms. Considine.

Donal Murphy, Head of Infrastructure and Credit Investments for the Ireland Strategic Investment Fund, said: “ISIF’s investment is our second major investment in Shannon Airport, bringing our total funding for enhancing its infrastructure to €26m. This investment demonstrates our ongoing commitment to regional development in line with the new ISIF investment strategy, announced earlier this year.

“Coupled with ISIF’s other major commercial investments in regional infrastructure, ISIF is aiming to improve the connectivity of Ireland’s regions and make it easier for Irish employers to access global markets, find new customers and sell more to existing customers,” he added.

“We are delighted to have secured IAC as a tenant for the hangar which is consistent with the Government’s National Aviation Policy to develop the aviation and aerospace sector in Shannon. It demonstrates government commitment to enhance Ireland’s attractiveness and encourage more aviation businesses to locate and expand,” said Ms. Considine.

Stressing the significance of the project Ray O’Driscoll, Chief Operating Officer, Shannon Group said: “This is a major project that supports the expansion of Shannon Airport and IASC (the International Aviation Services Centre), and contributes to Shannon Group’s strategy for developing its commercial property portfolio. By the end of 2020 Shannon Group will have delivered over 900,000 sq ft of new or refurbished commercial property solutions at Shannon Airport and Shannon Free Zone,” he said.

Environmental sustainability is an important part of Shannon Group’s development objectives. Sustainability and efficiency were key parameters in the design process of the new hangar, with all maintenance and engineering equipment chosen for maximum efficiency. The new hangar will feature LED lighting, maximum transparent panels in the roof for natural light, an air recirculation system for the extraction system and a heat recovery system for exhaust air.

Welcoming the announcement Rose Hynes, Chairman, Shannon Group said: “The hangar will greatly contribute to the development of Ireland’s aerospace capabilities for some of the world’s largest commercial aircraft. It further enhances Shannon and Ireland’s reputation as a global centre for the aviation industry which Shannon Group is actively promoting through its IASC.”