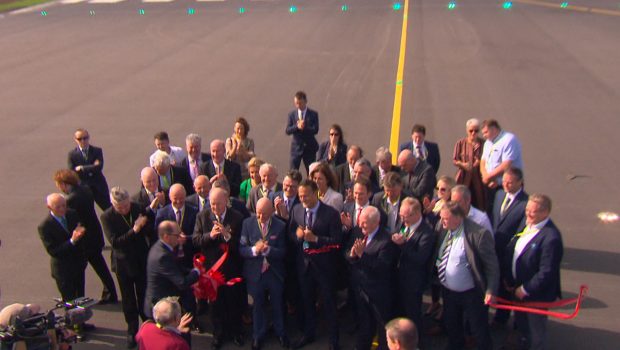 An Taoiseach, Leo Varadkar, TD performed the official ribbon cutting ceremony to mark the opening of the newly resurfaced runway at Ireland West Airport this week.  Runway 26/08, which measures 2,400 metres in length, opened in 1985 and handles 100% of all flights at the airport. This is the first time in its 34-year history that the runway has had a full overlay, including taxi ways, and the upgrade of the Instrumentation Landing Systems (ILS) at the airport. The runway rehabilitation ensures that the runway at Ireland West Airport continues to meet the strict regulations governing the operation and specification of runways at major airports.

The project which cost €11.2m was supported to the value of 75% of the total by the Department of Tourism, Transport and Sport, as part of the Project Ireland 2040 strategy, with the airport funding in the region of €2.8m from its own funds to complete the project.

This rehabilitation works took place overnight outside of operational hours over a four-month period, which commenced last May, as it required the full closure of the airport’s main runway. The project was completed on time, with minimal disruption, at the end of August and within budget, with up to 200 workers employed for the duration of the works, providing significant spin off benefits for the local region.

2019 will see record passenger numbers, with over 800,000 people expected to travel through the airport this year. A recent economic study carried out by Ernst and Young has highlighted that in 2018 the airport contributed €182 million in spend across the region and supported almost 3,000 jobs. It also generated €29 million of a dividend back to the exchequer revenues. 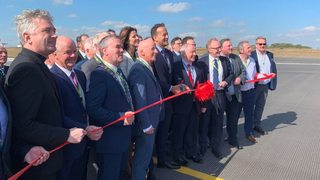 Speaking at the official opening of the runway, An Taoiseach, Leo Varadkar, said “Ireland West Airport is a strategic asset for Ireland, as the international gateway to Connacht. The opening of the upgraded runway is a super day for the airport, safeguarding its operations for the future. Since my time as Minister for Transport, I have been a big believer in Ireland West Airport because of the huge contribution it makes to tourism and economic development across this region. This is just one of many major Government infrastructural  investments in the Western region, including the Gort to Tuam motorway, the upgrading of the N4 to Sligo and the National Broadband Plan soon to start.  We will continue to work with Ireland West as it gets closer to its goal of welcoming one million passengers through its doors every year; a goal which is clearly on the horizon.”

Arthur French, Chairman, Ireland West Airport said ‘Today marks another major milestone in the airport’s history, with the official opening of the newly resurfaced 2,400-meter runway. I wish to compliment the main contractors Lagan Aviation/Clare Civil Engineering (LCJV) with Project partners, Atkins Consulting Engineers and the Airport’s Project Manager Tomas Grimes for their work on this project. I wish to acknowledge the continued support of An Taoiseach, Government and the Department of Transport, Tourism and Sport who provided 75% of the funding towards this project, as part of the Project Ireland 2040 strategy, and without which the project could not have been completed. Runway 26/08 which opened in 1985, has seen over 11 million passengers land and take off on it and it is a critical element of the airport’s infrastructure. I’d like to also express our continued gratitude for the support from local representatives and our local authority stakeholders and provide a special note of acknowledgement and thanks for the work done over the past 2 years by Mayo County Council in completing the planning scheme for the Strategic Development Zone here at the airport recently. We look forward to the completion of the project which will provide planning certainty for potential developments that may take place at the airport in the future’.

Councillors at Mayo County Council have unanimously passed a motion to adopt the draft planning scheme for the Strategic Development Zone (SDZ) at Ireland West Airport. The SDZ around the airport will be the only rural SDZ in the country and makes provision for a hotel and conference facilities. SDZs were established in 2000 to enable Government to designate certain areas as of strategic national importance to be fast-tracked through the planning process.

Arthur French, Chairman, Ireland West Airport, said: “The airport welcomes the progress made in relation to the Strategic Development Zone at Ireland West Airport. We would like to thank Mayo County Council for their work to date and in working with the airport on the development of the Master plan required to complete the zoning and we look forward to the completion of the project which will provide planning certainty for potential developments that may take place at the airport in the future.”