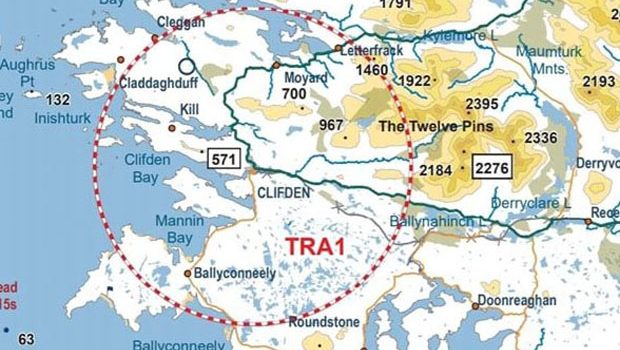 The IAA have published details of a Temporary Restricted Area over Clifden town today, Saturday 15th June, while events take place to mark the centenary of the Alcock and Brown transatlantic flight. Aircraft inbound to Cleggan airfield for the event should note the times of the TRA as the airfield falls within the restricted area. The details, published by NOTAM, state:

A RESTRICTION (TEMPORARY RESTRICTED AREA) TRA ON THE FLYING OF AIRCRAFT INCLUDING SMALL UNMANNED AIRCRAFT AS DEFINED IN S.I NO.563/2015, SHALL APPLY IN AIRSPACE OVER CLIFDEN, CO GALWAY CONTAINED WITHIN THE FOLLOWING LIMITS: A CIRCLE RADIUS 5.0NM CENTRED ON 532924.00N 0100112.00W. AREA RESTRICTED TO USE BY SEARCH AND RESCUE (SAR), STATE AIRCRAFT,EMERGENCY AIR AMBULANCE AIRCRAFT, AND ANY AIRCRAFT SPECIFICALLY AUTHORISED BY THE CONTROLLING OFFICER OF THE AIR CORPS, DEFENCE FORCES IRELAND. ANY QUERIES MAY BE ADDRESSED TO THE DEPARTMENT OF THE IAA BY EMAIL AT FOD (AT) IAA.IE OR TEL:00 353 1 6031117/1148/1410 BETWEEN THE HOURS OF 0900HRS AND 1700HRS LOCAL MONDAY TO FRIDAY. SEE WWW.IAA.IE. 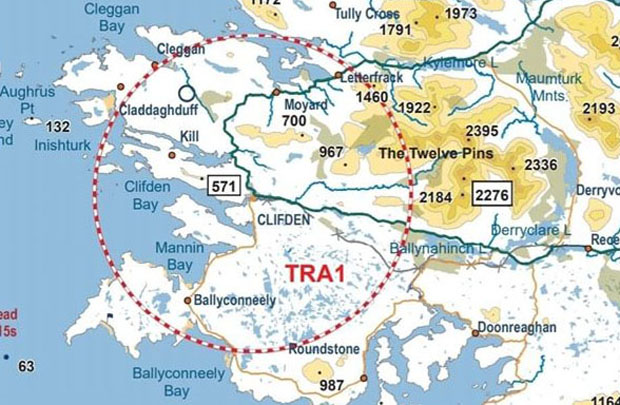