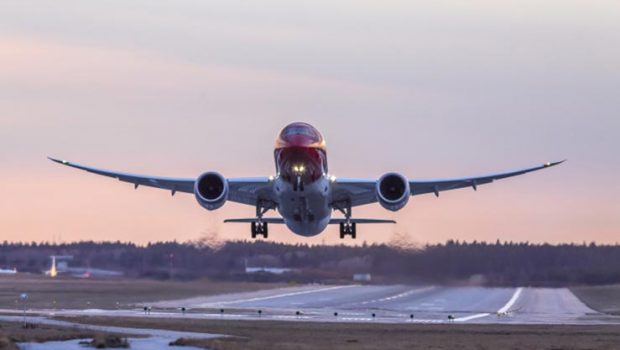 In response to the instruction by EASA to suspend operations of the Boeing 737 MAX, Norwegian will temporarily deploy a Boeing 787-9 Dreamliner to operate US flights from Dublin. Customers booked on affected transatlantic routes to and from Ireland serviced by the 737 MAX will be rebooked onto flights using the 787-9 Dreamliner. The 787 Dreamliner, registered G-CKWF with Charles Lindbergh on the aircraft tail, will operate the Dublin-New York Stewart (SWF) route daily for the foreseeable future.

The first flight will be operated today on flight D81763 from Dublin Airport to New York Stewart International Airport (SWF) at 15:20 local time. Arrangements are being made to accommodate passengers booked to travel from Dublin to Stewart and Providence on the new Dreamliner service with plans to bus passengers to Providence upon arrival in New York.

Norwegian positioned the 787-9 Dreamliner aircraft and crew from London Gatwick this afternoon. The Dreamliner has 338 seats configured with a Premium cabin offering 56 seats and 282 seats in economy.

Speaking in a video post to customers earlier today, Norwegian CEO Bjørn Kjos said “First and foremost, I would like to apologise to our customers who are affected by the temporary grounding of our 737 MAX aircraft. Now our first priority is to look after our customers in the best possible way. Our colleagues in Norwegian are working tirelessly to find solutions for passengers who have been affected.” He went on to say that it was clear the company would not be taking the cost related to these cancellations and that “we will send this bill to those that produce this aircraft”.

The grounding of the 737MAX comes as another blow to Norwegian that has been struggling financially. The company has, however, continued to focus on growth carrying more than 2.5 million passengers in February, an increase of 8% compared to the same month last year. Growth is now slowing down considerably, in line with the strategy of returning to profitability. A total of 2,517,335 passengers chose to fly with Norwegian in February. The total traffic growth (RPK) increased by 11% and the capacity growth (ASK) increased by 15%, down from 35% in February last year. The load factor was 81.5%. Norwegian operated 99.3% of the scheduled flights in February, with 83.5% (up 8.8%) departing on time.