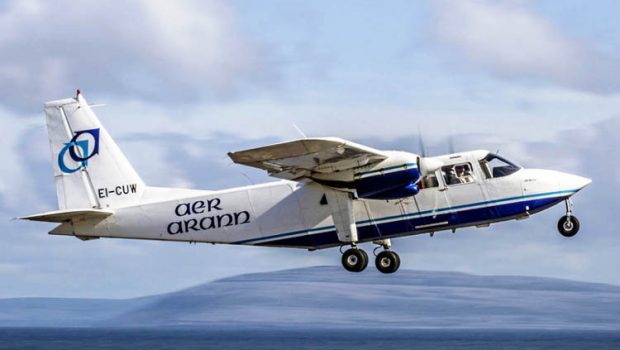 We report in June that Aer Arann Islands, the airline serving the Aran Islands served six months’ notice on the Department of Culture, Heritage and the Gaeltacht to terminate its contract to operate Public Service Obligation (PSO) flights to the Aran Islands from 6th December. With only days to go, an interim arrangement has been made to continue flights on a temporary basis until 20th December. This will allow the Department time to issue a Request for Tender for an interim service that will run from 21st December this year until 30th September 2019 while a more permanent operator is sought.

The dispute is over the PSO routes which Aer Arann claim are too onerous. Any additional flights completed by the airline outside of the PSO contract leads to deductions from allowances which the airline claim are unsustainable. The €800,000 per year contract is currently halfway through its four-year term and covers about 3500 flights annually between Connemara Airport (EICA), Inishmore (EIIM), Inishmaan (EIMN) and Inisheer (EIIR). The service has carried 42,000 people annually at peak, but this figure has fallen to just over 30,000 under the latest PSO terms.

In a surprise move last week, Aer Arann owner Senator Pádraig Ó Céidigh, offered to sell the airline for €1 to the Aran Island communities. Speaking to the Irish Times, Tarlach de Blácam, owner of globally traded Inis Meáin knitwear, said the community-owned island companies in all three islands had looked very seriously at taking over the airline and had carried out due diligence. “We are utterly reliant on an air service in the island and cannot do without one,” he said. He said the communities had been willing to take over Aer Arann but wanted certain conditions. They included sufficient funding to carry out ongoing maintenance on the three aircraft.

One option suggested was for the Department to take over the running of Connemara Airport (Aerfort na Minne, Indreabhán). This would leave Galway county with four state owned airports in addition to Galway Airport, Inishbofin and Cleggan. Galway Airport has been closed to all traffic except the Galway Flying Club for the last number of years while Inishbofin and Cleggan have never opened since they were built over 10 years ago. Not an encouraging track record…

Main photo above by Carl Ford