Ireland West Airport were delighted to announce that on 16th November, Ryanair welcomed its 8 millionth passenger on flights to/from the airport.  Irene Brady from Ballaghaderreen, Co. Roscommon, who was travelling to Liverpool was the lucky 8 millionth Ryanair passenger and to mark the occasion was presented with a pair of return flights to Ryanair’s newest destination, Cologne, from Ireland West Airport. 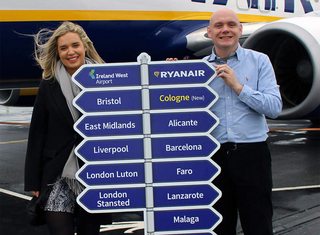 Ryanair first starting operating flights from Knock to London Luton in December 1986 and have continued to grow their route network from the airport. The airline recently launched their summer 2019 schedule which will offer customers in the West & North West a choice of 13 routes to the UK and Europe, delivering over 600,000 passengers with 46 flights weekly.

The 2019 schedule will include for the first time a new twice weekly service to Cologne which starts in June. Other highlights of the 2019 schedule include an extra 8,000 seats on their twice weekly service from Barcelona, an extra 13,000 seats on the Bristol service and a season extension on the Alicante service now operating from April to October

Robin Kiely, Ryanair said “We are pleased to launch our 2019 summer schedule from Ireland West Airport with 13 routes, including a new route to Cologne. Ryanair is also delighted to celebrate its 8 millionth customer since it started operating from the West of Ireland airport in 1986. Over the last 32 years Ryanair has seen a huge demand for its routes at Ireland West Airport as customers in the West of Ireland snap up Ryanair’s lowest fares to top destinations including Bristol, East Midlands, Liverpool and London Stansted as well as to a host of European destinations in Spain, Portugal, Italy and now Germany”.

Joe Gilmore, Managing Director, Ireland West Airport added “We are delighted to reach another landmark in the airport’s history and growth with Ryanair in welcoming their 8 millionth passenger to use the airport. I would like to acknowledge the loyalty and commitment that Ryanair has shown to the airport and the West of Ireland over the last 32 years providing vitally important international access to the UK and Europe and in particular their continued support for inbound tourism with their popular mainland European services from Milan and Barcelona. We are delighted also to welcome a new service from Cologne which starts in June 2019 as part of our biggest ever summer 2019 schedule with Ryanair which will see flights to 13 destinations across the UK and Europe”.

Pre-tax profits at the firm behind Knock Ireland West Airport last year almost tripled to €1.67m after the airport enjoyed its busiest year on record.  Passenger numbers increased by 2% to reach 750,000 for the first time in the airport’s history and this contributed to revenues at Connaught Airport Development Company Ltd increasing by 4% from €12.63m to €13.12m.

The directors state that the group recorded a pre-tax loss of €192,791 prior to the receipt of operational funding from the Department of Transport, Tourism and Sport. Numbers employed increased from 130 to 135. In 2018, the airport expects to handle 775,000 passengers – a 3% increase on the 2017 figure.