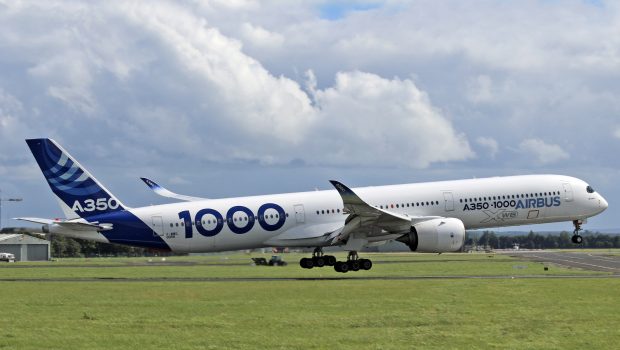 Shannon played host on Thursday afternoon to the first visit to Ireland by the latest aircraft from the Airbus stable. The new Airbus A350-1000 arrived in Shannon to perform a number of high speed rejected take off’s but unfortunately the aircraft suffered an engine problem on arrival. The aircraft had some difficulty with making the U-turn at the 06 end of the runway as was likely to need some towing assistance but after a short delay, the large Airbus made it to the ramp under its own power. It later performed one rejected take off (RTO) at Shannon before returning to Toulouse in the evening. The 74-metre-long A350-1000 is the largest variant of the A350 family and is to seat 366 passengers in a typical three-class layout over 8,000 nautical miles (14,800 km). The aircraft is a direct replacement for the Airbus A340-600 and is a competitor to the Boeing 777-300. Airbus is claiming up to 25% saving on fuel burn per seat on the Boeing 777-300ER. The first aircraft will be delivered to Qatar Airways with the first delivery expected before the end of this year and so far there is 211 orders for the latest variant to roll out of the Airbus facility in Toulouse.