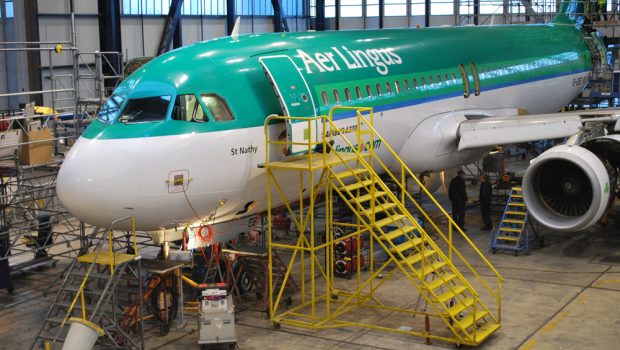 Dublin Aerospace, Ireland’s largest independent Aircraft MRO, have announced today that the company has been awarded a five-year contract by Aer Lingus. Under the terms of the agreement, Dublin Aerospace will be responsible for Overhauling and Repairing the airline’s Landing Gears for their Airbus A320 family aircraft.

Chief Commercial Officer, Kevin Wall stated, “We have a long history of working with Aer Lingus and we are delighted to be awarded this contract. The people at Aer Lingus know, based on our history and expertise that they can rely on our team to maintain their A320 fleet to the best possible standards”.

Dominic Ryan, Director of Maintenance and Engineering for Aer Lingus said, “Aer Lingus has worked with Dublin Aerospace since 2009 because of the quality of their service and look forward to continuing this very positive partnership”

The Landing Gear facility at Dublin Airport has been in place for over 40 years. Since the beginning the skills of machining and process treatments along with landing gear assembly have been passed through the generations. Today Dublin Aerospace specialise in landing gears fitted to the Airbus A32X family aircraft as well as Boeing B737NG’s and Boeing B737 Classics.

Dublin Aerospace has a facility spanning 20,000m2 covering Hangars 1, 4 and 5. They operate a 4 bay base maintenance facility that can handle approximately 70 aircraft per annum, an APU overhaul centre that can handle 400 APU’s a year and a Landing Gear services centre that has capacity for 250 legs annually.