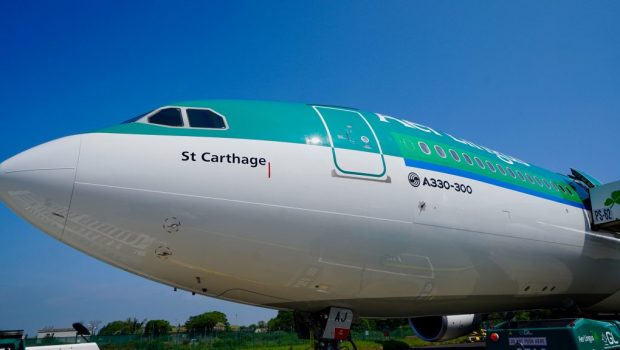 On Tuesday (23rd May) Aer Lingus took delivery of their newest aircraft, Airbus A330-302, EI-GAJ named Saint Carthage. It arrived from Toulouse as the EIN991 landing at 20:43UTC. The aircraft has a total capacity of 313 seats, made up of 30 business class seats and 283 economy seats. It entered service the following day on the EI109 service from Dublin to New York (JFK).

The addition of EI-GAJ brings the long-haul network up to 15 aircraft (including 4 Boeing 757’s operated by ASL Airlines on behalf of Aer Lingus) and the total fleet to 63 (including the Aer Lingus Regional fleet operated by Stobart Air). The airline will now operate their largest ever transatlantic schedule flying to 11 North American destinations, with a total of 2.5 million transatlantic seats on offer, including a new direct service to Miami from Dublin starting in September. The new Miami route joins the existing transatlantic routes to Boston, Chicago, New York, Orlando, San Francisco, Washington and Toronto from Dublin and Boston and New York from Shannon, as well as Los Angeles, Newark and Hartford, which commenced last year. This summer will also see an increase in the Los Angeles service to a daily flight for the peak season, Dublin to Orlando will increase to four times per week, and Chicago will also increase to a double-daily service.

According to Aer Lingus “Transatlantic growth is an integral element of our successful strategy to expand our Dublin Airport base into a major European transatlantic gateway. While traditionally we have connected Irish residents to North America, today more than a third of our transatlantic guests begin their journey in the UK or mainland Europe connecting via Dublin. The convenience of U.S. Customs and Border Protection services at Dublin has enhanced the continued growth of our Dublin operation as a connecting gateway. According to the 2016 league table, Dublin Airport is the fifth largest airport in Europe for North American connectivity, having jumped from eleventh position in 2010.”