On 21st November, Glasgow based Loganair announced that it will discontinue its franchise agreement with Flybe, and will take to the air in its own right, once again, from 1st September 2017. Scotland’s Airline has operated its services under franchise agreements with British Airways, from 1993 to 2007, and latterly with Flybe from 2007. The current franchise arrangement with Flybe will conclude on 31st August 2017, although the two parties are continuing to discuss potential opportunities to work together in future.

Loganair’s long-standing and successful codeshare arrangement with British Airways will continue, enabling customers to make a single booking for a journey from points throughout the Highlands and Islands, to London and onwards, to British Airways’ worldwide network.

After nearly quarter of a century flying under franchise arrangements with other airlines, the move will create a national airline for Scotland, headquartered in Scotland and in addition once again marketing its services and flying under its own name. A new, definitively Scottish identity will also be introduced to the skies. 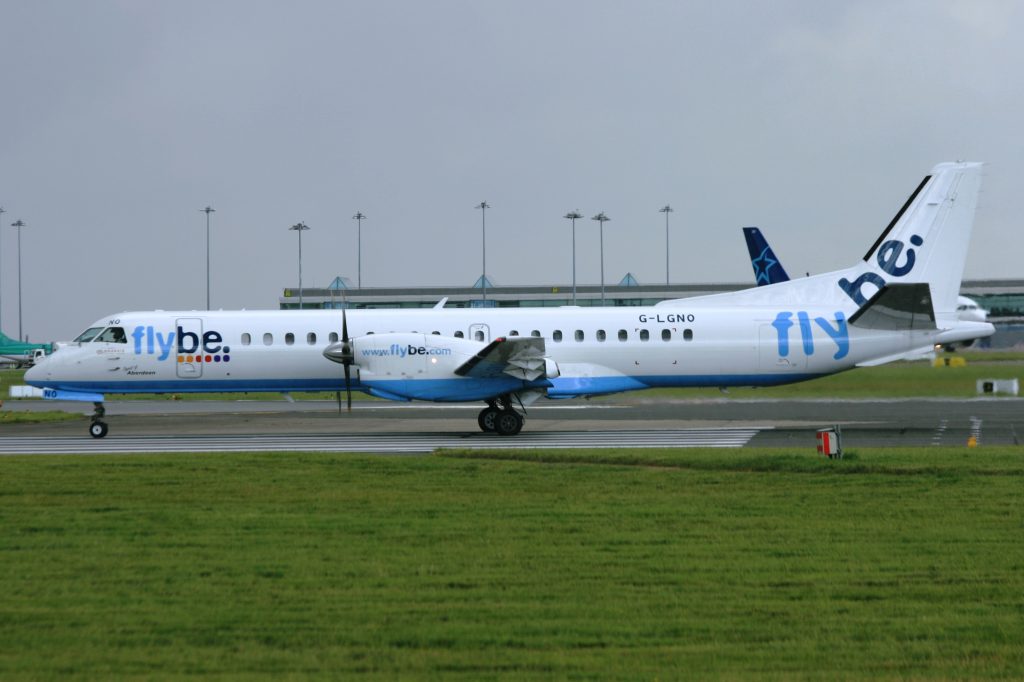 Employing over 600 people, Loganair operates a fleet of 28 aircraft, consisting of two BN Islanders, three DHC-6 Twin Otters, two Saab 340As, 13 Saab 340Bs, three Dornier Do328-100s, and five Saab 2000s. Alongside its scheduled services, it undertakes an extensive range of contract services for the Royal Mail and oil and gas companies. These services will also carry the resurgent Loganair – Scotland’s Airline identity. After a number of recent successful contract awards, the airline is actively pursuing its ambitions to widen, both its contract and scheduled service operations, in future.

Commenting on this major milestone in the 54-year history of Loganair, Peter Simpson, Chief Executive of Airline Investments Ltd, Loganair’s parent company, said; “Although Loganair has flown as a franchise carrier for larger airlines over the last 24 years, there is still a huge level of recognition and affinity for the Loganair name throughout Scotland and beyond. We believe the time is right for Scotland’s Airline to now spread its wings once again, and are delighted to be introducing a bold new corporate identity to accompany this important move”.

Jonathan Hinkles, Loganair’s Managing Director added; “All of us are very much looking forward to providing the highest standards of safety, punctuality and customer service synonymous with the Loganair name. We hold tremendous responsibility to operate services on lifeline routes and provide connectivity for Scotland – operating more flights in Scotland than every other airline put together – and I am wholly confident that Loganair’s independence will be warmly welcomed by both our customers and our dedicated team of professional employees.”

The transition will take place on 1st September 2017. Loganair will establish its own reservations system by March 2017 for flights on and after that date via its website at www.loganair.co.uk and will continue to take bookings via key travel agents and partner airlines into the future.

For its part, Flybe said the discontinuation of the franchise agreement stemmed from “a failure to agree future operational standards and commercial arrangements.”

Two days later, Loganair announced its largest ever flight schedule, as its services for Summer 2017, went on sale. The new schedule includes new overseas summer flights between Scotland and Norway and the Faroe Islands, together with more flights and more seats on existing routes.

Loganair will provide over 1,000 flights each week across 46 routes, offering unrivalled connectivity for Scotland and with operations stretching as far afield as London, Norwich, Manchester, Dublin, and Bergen in Norway. It has almost 300 flights each week to and from Glasgow, and is the largest operator at key airports throughout the Highlands & Islands including Inverness, Sumburgh, Kirkwall and Stornoway.

A new non-stop twice-weekly service will link Glasgow and the Norwegian city of Bergen and it will be operated on Mondays and Fridays from 5th May to 25th September 2017. It’s part of a sizeable expansion, which will also see the airline’s schedule to Bergen, bolstered by extra flights from Shetland and new direct flights from Orkney.

It will also introduce the first regular service in recent years linking Shetland and Aberdeen with Vagar, the airport of the Faroe Islands, again starting in May. The service will operate on Fridays and Sundays from 26th May to 3rd September 2017. Loganair say that it will carefully evaluate demand on the route, with a view to moving to year-round operations, in the future.

In summary, for Summer 2017, Loganair is strengthening its network and adding more seats and more flights than ever before. Describing the summer schedule as “a statement of intent” following the announcement of the airline’s transition from the Flybe franchise arrangements to an independent operator, Mr Hinkles added; “It’s always a pleasure to introduce new routes, and our links to Bergen and the Faroe Islands are great news for both leisure and business travellers. I’m also certain that we’ll see Norwegian and Faroese visitors taking full advantage of the wide range of leisure and retail options on offer in Scotland.”

The extensive Loganair network includes the world-famous ‘times subject to tide’ operations to the beach airport at Barra and the world’s shortest scheduled flight, linking the Orkney islands of Westray and Papa Westray. Operated by Loganair since 1967, the Orkney Inter-Isles Air Service connects seven Orcadian islands and includes the 1.7 mile (2.74km) hope between Westray (WRY) and Papa Westray (PPW), which is officially recognised by Guinness as the world’s shortest flight.

The duration is officially two minutes, but under ideal wind conditions can be completed in only 47 seconds. Other stops include Eday, Stronsay, Sanday and North Ronaldsay, plus the airport of origin, Kirkwall. 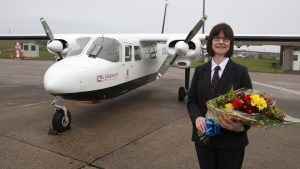 The globally acclaimed air-link welcomed its millionth passenger on 31st October and during a ceremony at Kirkwall Airport to mark the impressive milestone, one of the Orkney Inter-Isles Air Service’s most frequent and long-serving flyers, Royal Bank of Scotland mobile-banker, Anne Rendall, was gifted with a celebratory bouquet of flowers, by Orcadian native and newly appointed route Captain, Alex Rendall. Anne Rendall has completed over 10,000 trips on the service, visiting island communities across Orkney and tending to their banking requirements. Her trips take her to Sanday, Westray, Stronsay, Papa Westray and North Ronaldsay, and once a month she boards the ferry to Hoy. On each island she opens up the Royal Bank of Scotland office there and will serve 40 to 50 customers during each visit, from crofters to fishermen, to those serving the tourist industry by running B&Bs. Anne is only the second Royal Bank Scotland flying banker. The service was launched in 1969 by Mary Muir, who did the job for 20 years, until Anne took over. Anne has led the role for 21 years.

Royal Bank of Scotland also runs a fleet of mobile banks serving remote communities throughout the country, with teams of staff multitasking as drivers, clerks and security staff. Its fleet of 23 mobile banks helps serve more communities than any other bank in Scotland.

Describing the route as “a jewel in our network known across the world”, Mr. Hinkles added; “Despite its fame, it’s an essential life-line service for the people of Orkney, connecting the individual islands via a convenient air-link”. 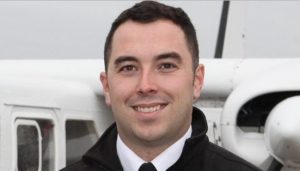 Although only 27 and the latest Loganair pilot to take over cockpit duties as Captain on the eight-seater Britten Norman Islander used on the famous route, Alex Rendall, 27, from Kirkwall started his career with Loganair when he was only 17. He worked in the airline’s Kirkwall office, while undertaking flight training during his days off. Alex has been flying for eight years and after completing four years of training, gained his Commercial Pilot Licence and earned his opening role behind the controls with Loganair at the age of 23. Alex initially flew Saab 340 aircraft, as a First Officer, out of Aberdeen Airport. He now takes over his new duties having recently completed an extensive training programme to fly this aircraft type.

As mentioned above, Loganair’s network includes the world-famous ‘times subject to tide’ operations to the beach airport at Barra. If the Barra beach landing is on your ‘bucket list’, then you can enjoy this unique experience from November – March for just £79 (around €92.84). The adventure includes the 140 mile (225 km) flight from Glasgow, coffee and cake at the airport café. Here you can watch the De Havilland DHC-6 Twin Otter used on the route take off and then land again, before the 1 hour 15 minute flight back to Glasgow. To book, call 0344 800 2855.

On 26th October, Loganair announced it had named an aircraft in honour of the most northerly airfield on the UK mainland, Wick John O’Groats Airport (WIC). The official unveiling ceremony was attended by Iain Alexander Gunn, Chief of Clan Gunn – Caithness’s Highland Clan, with ancient roots to the region.

The aircraft, G-LGNK (c/n 185), is the third in the Scottish carrier’s 13-strong Saab 340 fleet to undergo a full internal refit, as part of a £3.5 million (around €4.11 million) renewal programme. Named the ‘Spirit of Caithness’ in recognition of Loganair’s links with the airport, the aircraft has been completely refitted, repainted (in the Flybe purple c/s) and upgraded at a cost of nearly £270,000 (around €317,195).

Improvements to the 11 year old aircraft include the installation of new lightweight, ergonomically-designed modern seating, to provide improved leg room. In addition, interior panels were re-covered to help reduce vibration and latest technology sound-proofing was fitted to improve cabin acoustics, while new LED lighting and carpeting, have also helped to raise comfort levels.

Loganair has been operating daily services to Edinburgh from Wick for over 35 years, acting as a vital air-link for the north-easterly region.

As previously noted, Loganair has a very limited Irish operation, operating only a Flybe franchise service from Dublin to Inverness. This service had a daily Saab 2000 service over the summer. For the winter this year, the BE6963/4 operates on Sunday and Monday, with a Saab 340 and with a Saab 2000 on Fridays. From 27th December 2016 through to 3rd January 2017 (Monday-Saturday), the service will be operated by Saab 2000s.