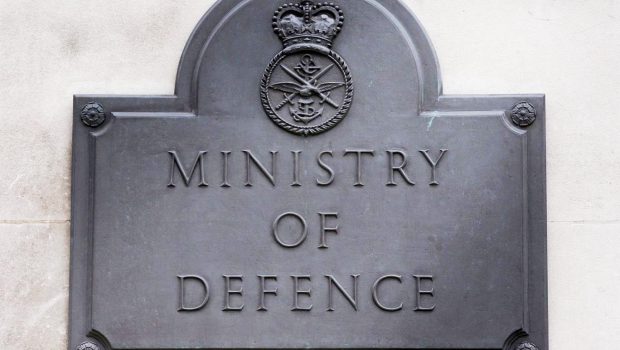 The UK Ministry of Defence (MoD) firmed up two orders at the Farnborough air show, which had been widely expected. They commit the United Kingdom to the purchase of both the Boeing P-8 Poseidon maritime patrol aircraft and AH-64E Apache attack helicopter.

In a statement released to the Flying in Ireland team, attending the Farnborough air show, the MoD confirmed, that it had “sealed the deal” to purchase nine P-8A Poseidon Maritime Patrol Aircraft (MPA), for the Royal Air Force (RAF). In what was probably one of his last significant acts as Prime Minister, David Cameron made the announcement on 11th July, at the air show saying that it underlines the UK’s commitment to spending “on vital defence.”

The new aircraft, which will be based at RAF Lossiemouth in Scotland, will play a vital role in protecting the UK’s nuclear deterrent and the UK’s two new aircraft carriers. They will also be able to locate and track hostile submarines, and will enhance the UK’s maritime Search and Rescue (SAR) capability. This capability will also bring economic benefits to Scotland and the wider UK, with an additional 400 personnel based at RAF Lossiemouth. 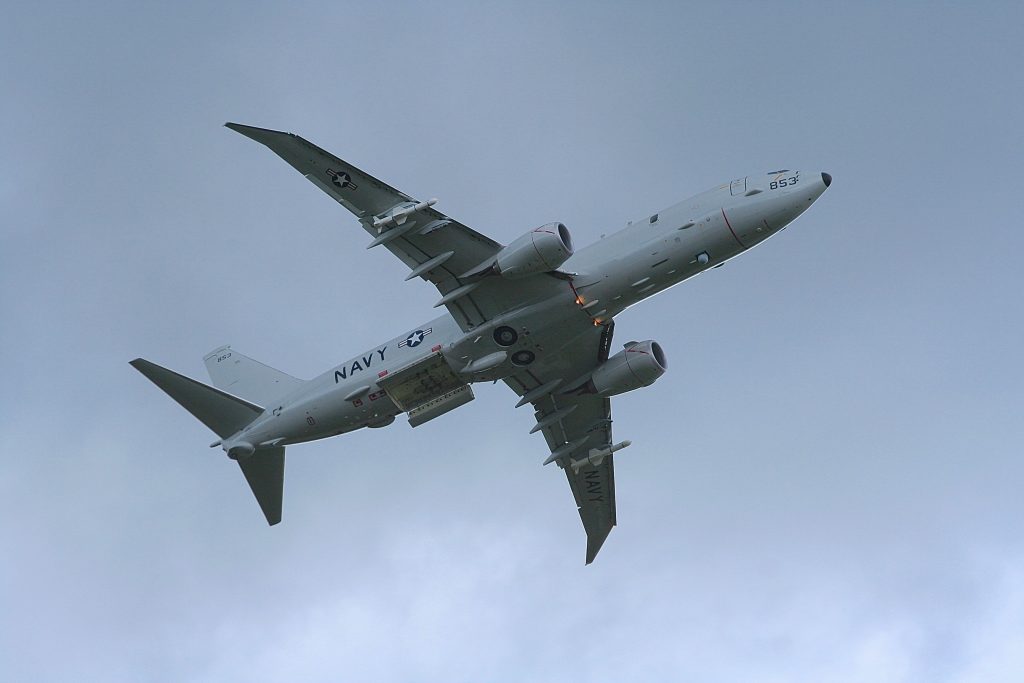 The P-8A MPA, manufactured by Boeing, are being purchased from the US Government via a Foreign Military Sale. The cost of developing and delivering the UK’s MPA capability, including paying for the people, their training, the infrastructure and necessary support at RAF Lossiemouth will be around £3 billion (around €3.58 billion), over the next decade. By tapping into the well-established US production line, the UK will get a tested and proven piece of equipment and in the right timeline. In addition, the RAF will benefit from collaboration with some of the UK’s key allies, including the US Navy and the Royal Australian Air Force.

The acquisition of Poseidon will see the restoration of the capability lost when Nimrod was retired in 2010 and the cancellation of the UK’s Nimrod MRA4 project. It was not unexpected following the UK’s Strategic Defence and Security Review of 2015, which proposed an off-the-shelf purchase of the P-8, rather than through a formal competition, or developing an indigenous MPA capability. UK content will be limited to the existing arrangements on fuel tanks, seats and weapons hard points.

In a comment, Defence Secretary Michael Fallon said: “Our new MPA aircraft will provide significant protection of the UK’s nuclear deterrent and our £6 billion (around €7.18 billion) aircraft carriers. They are part of our plan for stronger and better defence, backed by a budget that will rise each year of this decade. That means more ships, more aircraft, more troops available at readiness, better equipment for special forces, more being spent on cyber – to deal with the increased threats to our country”. Michael Fallon retained his post as Secretary of State for Defence following Theresa May’s appointment as Prime Minister.

Tony Douglas, Chief Executive Officer of the MoD’s Defence Equipment and Support organisation, said: “Already in service with other nations, the P-8A aircraft was the best solution to fill our Maritime Patrol Aircraft capability gap; it is tried, tested and can be delivered in the timeline we need. The fact that we have been able to commit the main investment decision on this key procurement less than nine months after the Government announced its intention to buy these aircraft is a great testament to the agility, professionalism, and drive of DE&S, working closely with colleagues across MOD and the US Navy”.

The P-8A is based on the Boeing 737, which is already supplied by UK industry, supporting several hundred direct UK jobs. What is more, UK manufacturers also already provide specialist sub-systems for the P-8 itself. Companies include Marshall for the auxiliary fuel tanks, Martin Baker for the crew seats and General Electric for weapon pylons. The new order of P-8As is also set to create opportunities for the UK to bid for training and support contracts.

The P-8A can operate at long range from its operating base without refuelling and has the endurance to carry out high and low-level airborne maritime and overland surveillance for extended periods. This cutting-edge aircraft will also be able to conduct wide-area search of Open Ocean to locate small boats and drop rescue life-rafts and equipment to vessels and people in distress.

The announcement of this deal also marks the point at which responsibility for leadership of the MPA Programme transfers from Joint Forces Command to the RAF. The RAF has been committed to maintaining the skills needed to operate these MPAs through the ‘seed-corn’ programme, which has embedded former RAF MPA operators within the MPA squadrons of Australia, Canada, New Zealand and the USA. Eleven RAF personnel are based at NAS Jacksonville, and seven of them accompanied the US Navy example, 168853 to the show.

Air Vice-Marshal Gerry Mayhew, who is responsible for the RAF’s fast jets and Intelligence, Surveillance and Reconnaissance assets, said: “The seed-corn initiative has been vital in ensuring that our future MPA aircrew are prepared to regenerate the UK’s MPA capability. By retaining those essential skills, our aircrew are already on the front foot when it comes to operating these new aircraft”.

The MoD also confirmed a $2.3 billion (around €2.08 billion) deal to secure 50 of the latest generation Apache attack helicopters for the British Army. Again while the AH-64E selection for the Army Air Corps was expected, it was unclear until the announcement, whether or not, the aircraft would be refurbished Boeing-Westland Apache AH1s that are currently in service, or new aircraft off the US production line. 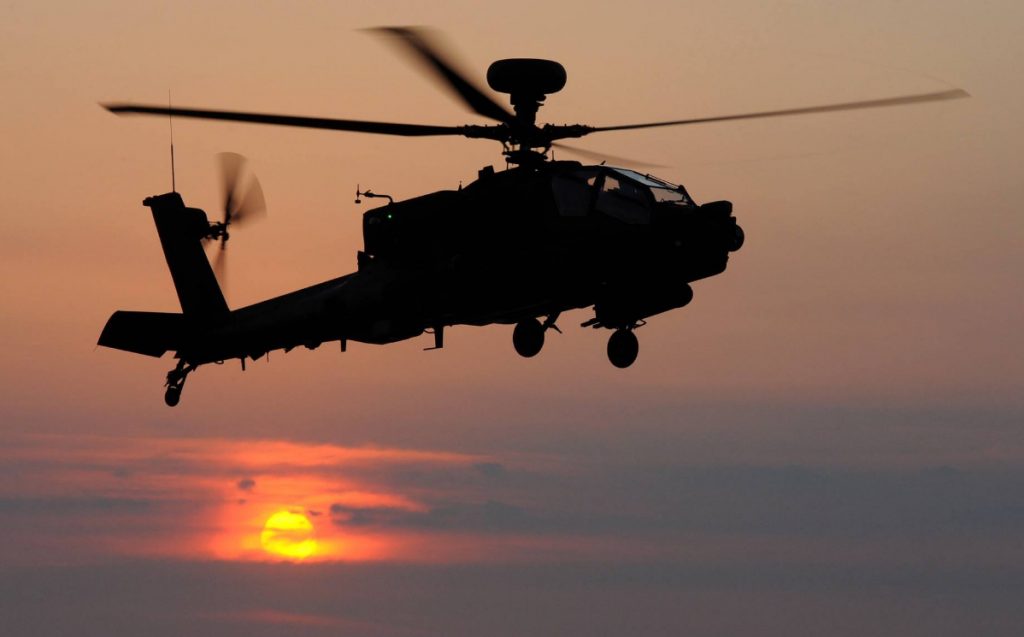 The fact that they are new Apaches means of course that they are much more capable than their predecessors. Flown by Army Air Corps pilots from the Joint Helicopter Command, they will continue to give the British Army the edge over any future adversaries. The AH-64E model of the helicopter can also carry more weapons while being more fuel efficient, allowing it to operate in more demanding conditions for longer.

The new Apache AH-64E helicopters, built by Boeing and already in service with the US Army, are being purchased via a Foreign Military Sale with the United States Government.

Although being built in the US, the new Apaches will also bring benefits to the UK, with companies in Gloucestershire, Hampshire, Bedfordshire, Cheshire and Gwent being awarded subcontracts by Boeing that collectively represent around 5% of the global Apache supply chain.

The support and training arrangements for the new Apache AH-64E helicopters represent a further opportunity for UK suppliers. The proposed arrangements for these services will be finalised over the next year, with contracts being placed toward the end of the decade. It is envisaged that these future arrangements will support around 350 jobs, a comparable number to that required to support the existing Apache fleet.

Leonardo Helicopters (formerly AgustaWestland) will continue to lead the arrangements to support the existing Apache helicopters until they are retired from service in 2023/24 and Defence Secretary Michael Fallon added: “In the longer term, I want these new Apaches to be maintained in the UK, and for UK companies to do most of the work. This includes Leonardo Helicopters, who have developed substantial knowledge and experience in the support of our current Apache fleet over the last decade and will continue to support the helicopters until their eventual retirement in around eight years’ time”.

Buying the AH-64E ‘off the shelf’ allows the MoD to take advantage of the US Government’s larger production programme in Mesa, Arizona, with the UK benefiting from economies of scale. To further guarantee value for money, systems from the current Apache fleet, such as the Modernised Target Acquisition & Designation System, and the Longbow Fire Control Radar, will be reused and incorporated into the new helicopters where possible.

Chief Executive Officer at the MoD’s Defence Equipment and Support organisation, Tony Douglas said: “This is a momentous day for the UK Armed Forces, with these latest generation helicopters set to provide troops with a world-beating capability for decades to come”.

He went on “The MoD’s deal with the US brings UK benefits too; a range of UK companies are benefiting from working on the global Apache programme and the support and training arrangements of these new attack helicopters presents further exciting opportunities for UK industry”.

The Chief of the General Staff General Sir Nick Carter added: “The new Apache fleet will provide the British Army with a highly potent fighting element of its Future Force 2025. The Apache has already proved its worth on operations in Libya and Afghanistan, supporting UK and coalition troops, and this new model will give our pilots an attack helicopter that is faster, more responsive and more capable. These improvements will give us the edge on operations as we work to protect the UK and our interests both at home and abroad”.

The deal with the US Government includes an initial support contract for maintenance of the new helicopters, along with spare parts and training simulators for UK pilots. The new helicopter’s improved computing capacity and updated sensors means the new fleet will also be receptive to upgrades in the future, ensuring it remains at the cutting-edge of technology.

The first UK helicopters are due off the US production line in early 2020 and will begin entering service with the British Army in 2022.

Also on 11th July, the MoD announced the joint signature of a Strategic Partnering Arrangement, with Leonardo Helicopters UK. It was signed on 23rd June 2016 and agreed between the Chief of Materiel Joint Enablers, Mr Pete Worrall, Deputy Chief of the Defence Staff (Military Capability), Lieutenant General Mark Poffley and Mr John Ponsonby of Leonardo Helicopters UK. This new arrangement recognises the mutual relationship between the MoD and Leonardo (formerly AgustaWestland), and includes commitments to working together on year-on-year improvements in cost effectiveness. It also recognises the respective roles in enhancing national prosperity through exports, where success generates revenue for the company and helps sustain valuable UK jobs and skills. 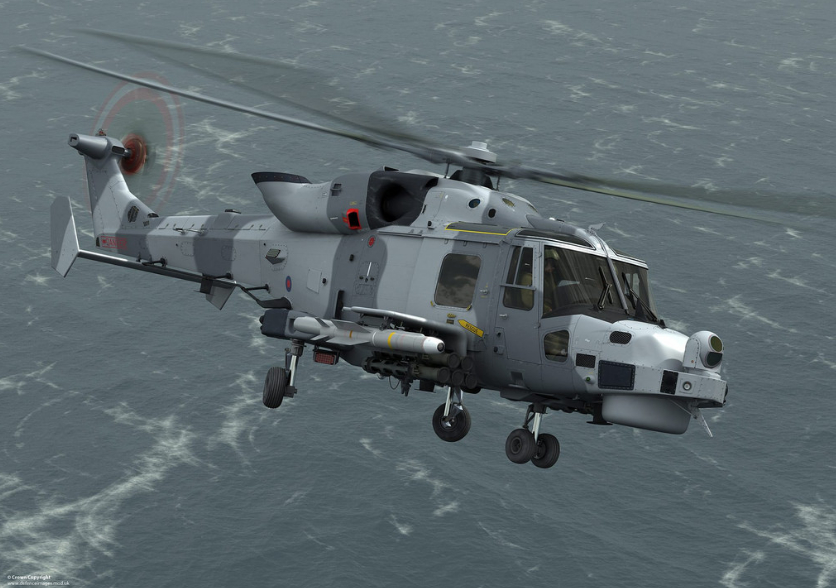 The Strategic Partnering Arrangement signed with Leonardo Helicopters builds on strong foundations. It is designed to ensure that both parties continue to work together to enhance national prosperity through export success, and ensure the right innovation and technologies are available in the UK to meet tomorrow’s defence requirements.

The MoD and Leonardo Helicopters first agreed to an SPA a decade ago, in June 2006. Over the recent months, the original arrangement has been reviewed and refreshed, resulting in a new Strategic Partnering Arrangement (SPA) that will endure for a further ten years.

This new SPA recognises and builds upon the success of the past decade, during which Leonardo has provided support to UK aircraft conducting operations across the globe, including in Iraq and Afghanistan. More broadly, it acknowledges the vital work that Leonardo undertakes to help maintain over a third of the UK MOD helicopter fleet, helping the MOD to provide world class capability and support to the UK Armed Forces.

The new SPA is not a contract and does not have financial value, but represents shared commitments to transparency and joint work that should bring benefits to the Armed Forces, the UK taxpayer and the company.

Chief of Material Joint Enablers at the MoD’s Defence Equipment and Support, Pete Worrall added: “We anticipate spending around £3 billion (around €3.59 billion) with Leonardo over the next decade to upgrade and support our helicopters. This arrangement represents a great opportunity for both Leonardo and the MOD, making clearer our respective and joint responsibilities when it comes to delivering maximum benefit to the UK taxpayer, our Armed Forces and for the company”.