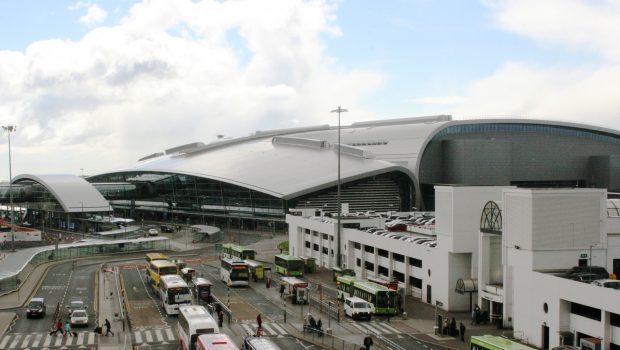 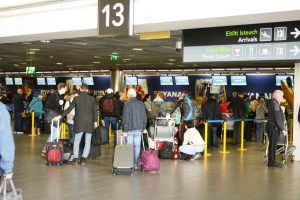 Passenger volumes to and from North America grew by 14%, with over 271,000 passengers travelling on this route sector in May.

Other international traffic, which includes flights to the Middle East and Africa, declined by 3% in May, with almost 55,000 passengers travelling on these routes during the month.

Dublin Airport has handled almost 10.3 million passengers in the first five months of this year, which represents a 14% increase on the same period in 2015. Almost 1.3 million extra passengers have been passed through Dublin Airport, so far this year.

June’s figures are likely to be boosted by an estimated 30,000 Irish soccer fans, due to travel from Dublin Airport to the Euro 2016 finals during the month. A total of 106 flights were scheduled to carry fans to Ireland’s three Group E games against Sweden, Belgium and Italy. Airlines have added 39 extra flights to the normal schedule to Paris, Lille and Bordeaux to help cope with the increase in demand from fans. In addition many fans were also expected to travel on flights to other destinations in France and Belgium and then continue their journey to the three match venues. In total, Dublin Airport has more than 150 departures to France per week this summer season, so fans had a wide choice of destinations.

Dublin Airport has also welcomed a significant number of Northern Ireland soccer fans, as they travelled to games in Nice, Lyon, and Paris where Northern Ireland play in Group C with games against Poland, Ukraine and Germany. Further charters or extra flights are likely as both teams proceeds to the next stage of the competition. 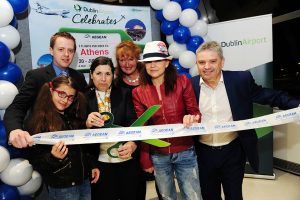 On Monday 20th June, Aegean Airlines commenced their seasonal, twice weekly service, to and from Athens, the AEE646/7, which was operated by Airbus A320-232(WL), SX-DNB. The service departs Athens on Mondays and Saturdays at 20:15, until 19th September, and is scheduled to arrive in Dublin at 22:25, both times local. There is a -2 hour time difference between the two airports. The inaugural flight arrived in Dublin at 22:28. Scheduled departure from Dublin is 23:15 and the actual time of departure of the inaugural flight was 23:55, while the scheduled arrival time in Athens is 05:05, the following morning. The flight time for the 1,786 mile (2,874 kms) journey varies between 3 hours 50 minutes and 4 hours 30 minutes.

“Athens is steeped in history and has so much to offer. I have no doubt this will be a very popular location for both business and leisure passengers. This new service allows customers from Dublin to travel to Athens and onto 30 destinations on Aegean’s route network,” he added.

Aegean Airlines, which is part of the Star Alliance network and they are competing on the route with Aer Lingus and Ryanair.

On Sunday 12th June, Thomson Airways inaugurated its weekly Dublin to Montego Bay charter, the TOM 454/5, which operates for six weeks through 17th July. The flight is scheduled to depart Dublin, as the TOM 454 at 09:20 and arrive at 12:50, in Montego Bay. Montego Bay is Jamaica’s second largest city and is one of its premier tourist resorts, along with Negril and Ocho Rios. The inaugural flight was operated by Boeing 787-8 Dreamliner, G-TUIE, which positioned in from Birmingham and departed Dublin at 09:52, landing in Montego Bay at 12:35. It covered the 4,503 mile (7,247 km) journey in 8 hours 43 minutes. There is a -6 hour time difference between the two airports. The return flight to Dublin, the TOM 455, is scheduled to depart Montego Bay at 14:40 arriving back in Dublin at 04:45, the following morning. This service is schedule to operate from 26th June through 31st July. 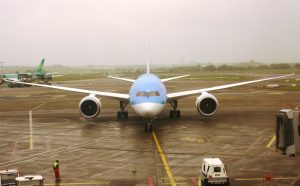 G-TUIE was also used to operate the inaugural weekly Dublin to Cancun charter, the TOM 536/7, on Monday 13th June. Cancun, which is on the coast of the Yucatán peninsula, is one of Mexico’s leading tourist destinations and the gateway to the resorts of the Playa Car and Riviera Maya to the south. The flight is scheduled to depart Dublin as the TOM 536 at 09:50, and arrive at 13:50 in Cancun. This charter is also for six weeks and runs through to 18th July. The inaugural flight departed Dublin at 10:53 landing in Cancun at 13:52, after covering the 4,975 mile (8,007 km) journey, in just under nine hours. There is a -7 hour time difference between the two airports.

The return flight to Dublin, the TOM 537, is scheduled to depart Cancun at 15:25, arriving back in Dublin at 05:45, the following morning. This service is schedule to operate from 27th June through 1st August.

Another charter series due to start on 5th July, is the IZ 921/2 to Tel Aviv’s Ben Gurion Airport, operated by Arkia – Israeli Airlines. The flight, operated by a Boeing 757-300, departs Tel Aviv at 16:55 on Tuesdays and arrives in Dublin 20:45. There is a 2 hour time difference between the two airports and the flight time for the 2,505 mile (4,031 km) journey is 5 hours 10 minutes. The return flight departs Dublin at 22:15 and arrives in Ben Gurion the following morning at 05:25. The charter series runs until 30th August. 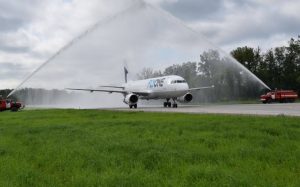 Two airlines have filed schedules for new services to Dublin. One of these is Fly One, a Moldovan start-up private airline, which received its Air Operator Certificate, in late March. It launched initial operations from Chisinau to Voronezh, south-west of Moscow, on 8th June. Its route network has 11 destinations in Europe, including Verona, Parma, Barcelona, London, Lisbon and Dublin. The tickets will be sold on the airline’s web-site and through global distribution systems (GDS) Amadeus and Sirena Travel. Fly One has been operating charter flights to Antalia, Iraklion and Rhodes, in Greece, since April. Its fleet consists of two Airbus A320s, ER-AXJ and ER-AXO. The Chisinau – Dublin service is scheduled to operate twice weekly (on Thursdays and Sundays) and commence on 30th June. Chisinau – Dublin is also served by Air Moldova, with a weekly service the 9U 831/2, which operates on Fridays. 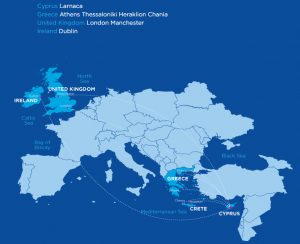 Another new route is Larnaca, due to be operated by Cypriot New start-up carrier Cobalt Air. It opened reservations via its website in mid-June, on a total of seven routes, with its first flight scheduled for 7th July, a new route to Manchester. The airline will be using IATA code ‘CO’, previously used by Continental Airlines and in preparation for its launch the airline took delivery of its first aircraft Airbus A320-232, 5B-DCR, on 13th June. The aircraft leased from GECAS, was originally delivered to Qatar Airways as A7-ABR on 1st February 1999 and it was more recently was in service with Air Macau as B-MAX.

Initially, the president of the airline’s Board of Directors, Gregoris Diacou announced that the company will start flying on 1st June and within a month it would connect Cyprus with direct flights to Athens, Thessaloniki, Heraklion, Chania, London, Manchester, East Midlands, Glasgow, Cardiff, Dublin, Paris, Beirut, Tel Aviv and Tehran. So far only Athens (twice daily), London Stansted (daily except Wednesdays) and Manchester (twice weekly) have been confirmed as starting on 7th July. The following day, Chania (twice weekly, Heraklion (twice weekly), Thessaloniki (four weekly) and Dublin twice weekly (on Wednesdays and Saturdays) are scheduled to commence.

Mr Diacou added that the company believes in the capabilities of Cypriots and wanting to support the local economy it has chosen to mostly hire Cypriots. A large percentage of Cobalt’s 145 strong work-force are ex-Cyprus Airways employees. The company has also plans to expand its reach in 2017 to destinations, which were not traditionally directly connected to Cyprus, such as China, India and USA.

However, in spite of Mr Diacou’s optimism, all is not well at the new airline. It has been confirmed that the Swiss Attorney General’s Office has three indictments pending against Urs Meisterhans, another member of the airline’s board. The Cyprus Business Mail has stated that the indictments are for “aggravated money laundering, securities fraud and negligence in financial operations.” These date back to May last year and stem from Meisterhans’ alleged dealings at Sinitus AG, a Swiss financial services company. The real problem that could face the airline is that the Cypriot Air Transport Licensing Authority (ATLA), has the power to revoke an airline’s license, should any one of its board members or executive leadership, be found to have committed illegal acts, or have acted unprofessionally.