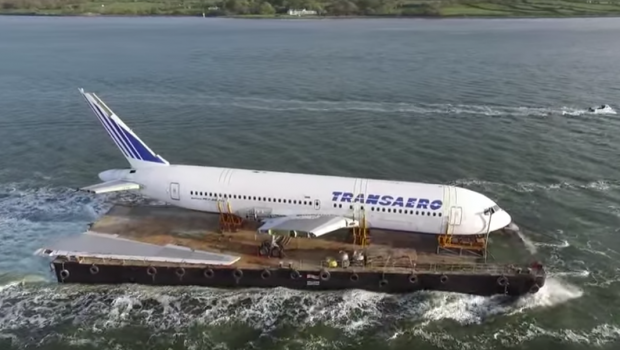 A decommissioned Boeing 767 aircraft is set to make land on the Irish West Coast tomorrow morning after being moved by barge on the high seas in a mammoth 36 hour exercise from Shannon Airport.

Hundreds of people were on hand at the airport over recent days and legions more stopped at various points along the Shannon Estuary to catch a glimpse of what is amongst the most unique sea cargos ever to sail out of the West Coast of Ireland.

Vast numbers again are expected to be present at Enniscrone tomorrow morning when it is lifted from the barge ahead of a short and final journey to the Quirky Glamping Village where it will become part of a unique seaside ‘glamping’ facility being developed by businessman David McGowan.

The unique shipment is grabbing huge attention, trending on social media in Ireland and beyond.

The 36 hour journey was the third stage in huge logistics exercise that begun last weekend when the wings were removed from the aircraft.

A team of 60 airport staff and logistics people working with David McGowan were then involved in the second phase as the 159-foot long aircraft, which weighs 50tons, was transferred yesterday to nearby Knockbeg Point, on the periphery of the airport complex, where it was loaded onto a barge at high tide, allowing the estuary and ocean journey to begin last evening.

Tonight the barge will dock in the North West coast of Ireland, at Killala, Co. Mayo, across the bay from where – tides and weather permitting – the aircraft will be unloaded at around 7a.m.  tomorrow.

For the Co. Sligo man behind the project, it was a case of many hands working together. “I have learned an awful lot about the power of people working together on this project. The community spirit has been fantastic. From the tremendous help I got from Shannon Airport, to the many, many people who turned out to see us off, makes it all worthwhile.

“We are making good progress, the barge with the aircraft is making her way up the Wild Atlantic Way. We got good news on the weather front, too, with expected swells now not materialising so we are in good shape to be in landing in Enniscrone tomorrow morning.”

Deirdre Whitney, Property Manager at Shannon Airport said that Shannon has worked with all sorts of cargo over the years but never moved anything as unique as this or in this way.

“We have worked on many, many different projects over the years but never anything quite like this.  I don’t think we will be seeing its likes again too soon, if ever,” she said.

“We’ve kept abreast of progress since the barge and aircraft left here last evening and are delighted its sailing smoothly.  It is really going to make a huge contribution to tourism in Enniscrone.  No doubt we will have many people flying in here in one aircraft and traveling up the west coast to stay in another. It would certainly make for a unique holiday.”

The aircraft will be joined with other modes of transportation – such as buses, taxis and a train – in creating a unique ‘glamping’ venture for visitors in popular seaside resort.