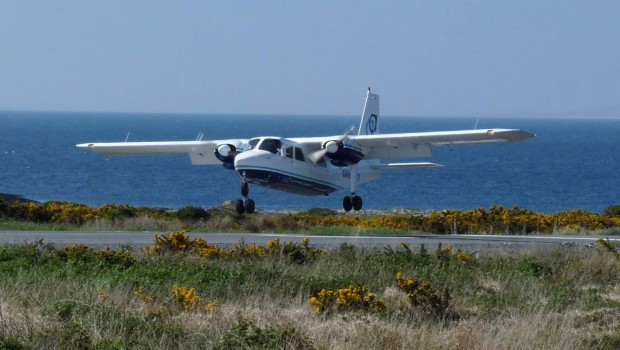 This story has been circulating on Facebook but is reproduced here for anyone who hasn’t seen it. It’s an interesting account of the development of air services to the Aran Islands. Original link HERE.

For many, the recent news that Aer Arann Islands may no longer be our air link with the mainland has evoked feelings of shock and anger. However, a feeling that registered also is one of great sadness.

Forty five years is a mighty long time and this airline has become an integral part of all three Islands life.

The airline was started in 1970 by a number of Galway businessmen, among them Jimmy Coen and Ralph Langan. They had taken up a challenge thrown down by the late Coley Hernon of Cill Rónáin when he had written to the newspapers questioning why the Aran Islands could not have a similar service as was in operation to many of the Scottish islands.

From very humble beginnings, the airline grew to be a major player in the airline industry before time and market conditions resulted in it being broken into two separate identities, Aer Arann and Aer Arann Islands. Aer Arann is now known as Stobart Air and has no connection with our Aer Arann Islands which is owned by the Ó Céidigh family of An Spidéal in Connemara.

The story of the early days of Aer Arann has the potential for being a great movie script and perhaps that may eventually happen. Regulations in 1970 were not anything like what they are today and this is one of the many reasons why the costs involved in running an airline have grown so much over the years. 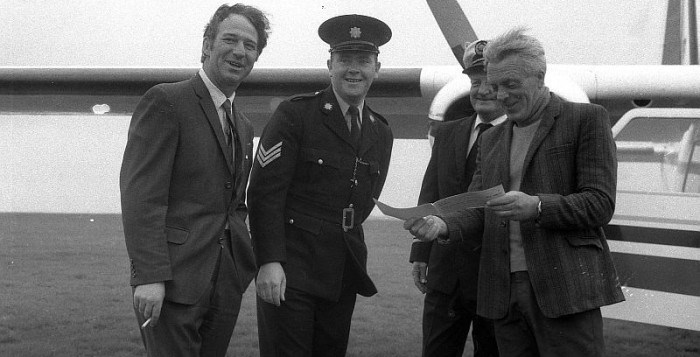 Bill Wallace was a great pilot and the older islanders, who naturally were a bit nervous of flying, had great faith in Bill. They figured that a man who had survived being shot down twice during his days in the R.A.F. must have God on his side.

Indeed the early flights were in many ways an ecumenical effort with a Dublin Protestant up front at the controls and many of the older passengers saying the rosary down at the back. Bill’s relaxed approach and natural way with people helped greatly in introducing an older generation to this modern way of transport.

Leaving the old airfield near Oranmore or later the tarmac at Carnmore was an incredible experience with Bill. While the other pilots, Hayden Lawford and Paddy Robinson would do a full check at the end of the runway prior to take off, with Bill, we always seemed to leave in “scramble” mode.

As we taxied down to the end of the runway Bill would roar “everybody comfortable” over his right shoulder before swinging around and hitting full throttle for take off. We all knew that we hadn’t been asked a question and that this just meant “brace yourselves”. This was all down to his training as a fighter pilot and the desire to spend as little time on the ground as possible. 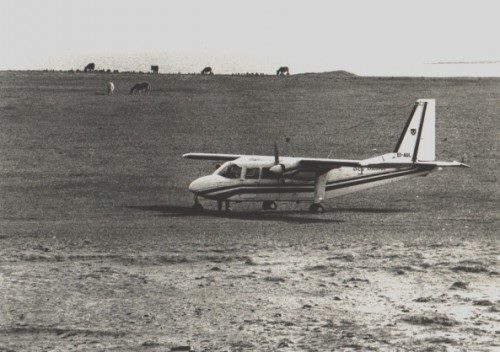 Time for Michael to clear the runway for takeoff. The plane often stopped over for a few hours, giving the donkeys a chance to get back to their grazing. 1970

Bill would go out of his way to make sure that the older islanders were given a seat as he knew that they needed to get home. On one occasion he advised some tourists to postpone their trip until the next day when he promised better weather and that he’d show them the Burren. This was in order to free up two seats for an old couple who needed to get home. True to his word, he gave the tourists a great view of the Burren the next day.

In those days the rules were very relaxed with regard to weight and Bill’s motto seemed to be that if it could be fitted into the freight compartment he would take it. He seemed to work on the principal that if he didn’t encounter anti aircraft fire over Mervue and wasn’t intercepted by the Luftwaffe over Bearna, the flight was doing just fine.

At the airfield in Cill Éinne the operation was run by Coley Hernon and his son Michael. As it was a grass runway, the stray donkeys of the island had a habit of grazing there and Michael had the job of driving around Rinn Mhéith each morning to clear them off the runway. Each morning Coley was a regular sight walking in military style back to the airfield. Those who knew Coley will remember his kindness to all and particularly to ill patients making their way to hospital. 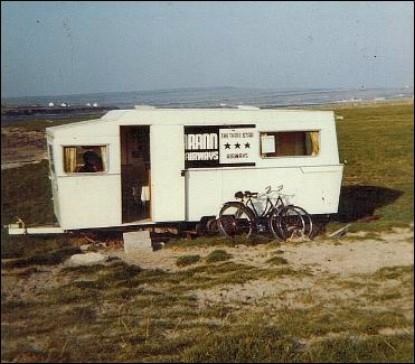 One example of Coley’s decency concerns a well know man from Galway town who is long since dead. Mattie had come to the island on a day trip on the old M.F. Galway Bay. He had a love for the dramatic and would always time his arrival at the boat just when the gangway was being taken in. On this occasion he had mistimed his arrival and his friends, who had boarded on time, had waved and laughed to him as the boat pulled away from the pier.

Having spent all his money, Mattie was in bad form as he made his way back up through the village. Luckily, he met Coley who kindly fixed him up with a seat on the plane and even organised a lift back to town with Hayden Lawford, from the airfield in Oranmore.
The outcome was that Mattie had the great pleasure of standing on the dock in Galway, laughing and waving to his friends on the Galway Bay, who had just spent three hours on the boat. To cap it all, he informed his friends that he had time to enjoy a pint in the Castle Hotel before strolling to the dock to welcome them home.

Before the rescue helicopter arrived in Shannon, many islanders owe their lives to the quick response of our medics and the Aer Arann staff. Most of us can remember many examples of this.

On one sad occasion in 1989 the plane just managed to make it to Aran before the light faded and dusk descended. They had come to evacuate a sound engineer from R.T.E. who had suffered a heart attack while doing a live broadcast. As the doctors worked to save his life, the evening soon turned to darkness. At the time there were no lights on the runway so in order to take off again, about three dozen cars lined the edge of the runway with their headlights on. Sadly, on that occasion, all the efforts of Islanders, doctors and airline staff were to no avail.

Some time later a fine set of lights were installed on the runway and indeed just before his last trip ever on the plane, Coley Hernon supervised the turning on of the lights from his stretcher as he headed for hospital.

Coley and Bill were great friends and on occasions, when the plane was grounded at Cill Éinne for a few hours, would adjourn to Fitzpatrick’s pub to discuss world affairs over a cup of hot tea.

On other occasions Bill would just head for the rocks with his fishing rod, and passengers waiting for a flight back to Galway would sometimes wonder at the sight of Bill, with his trademark deerstalkers hat and ancient “fishing” trousers, strolling back to the airfield with a strap of pollock or mackerel hanging from the rod. 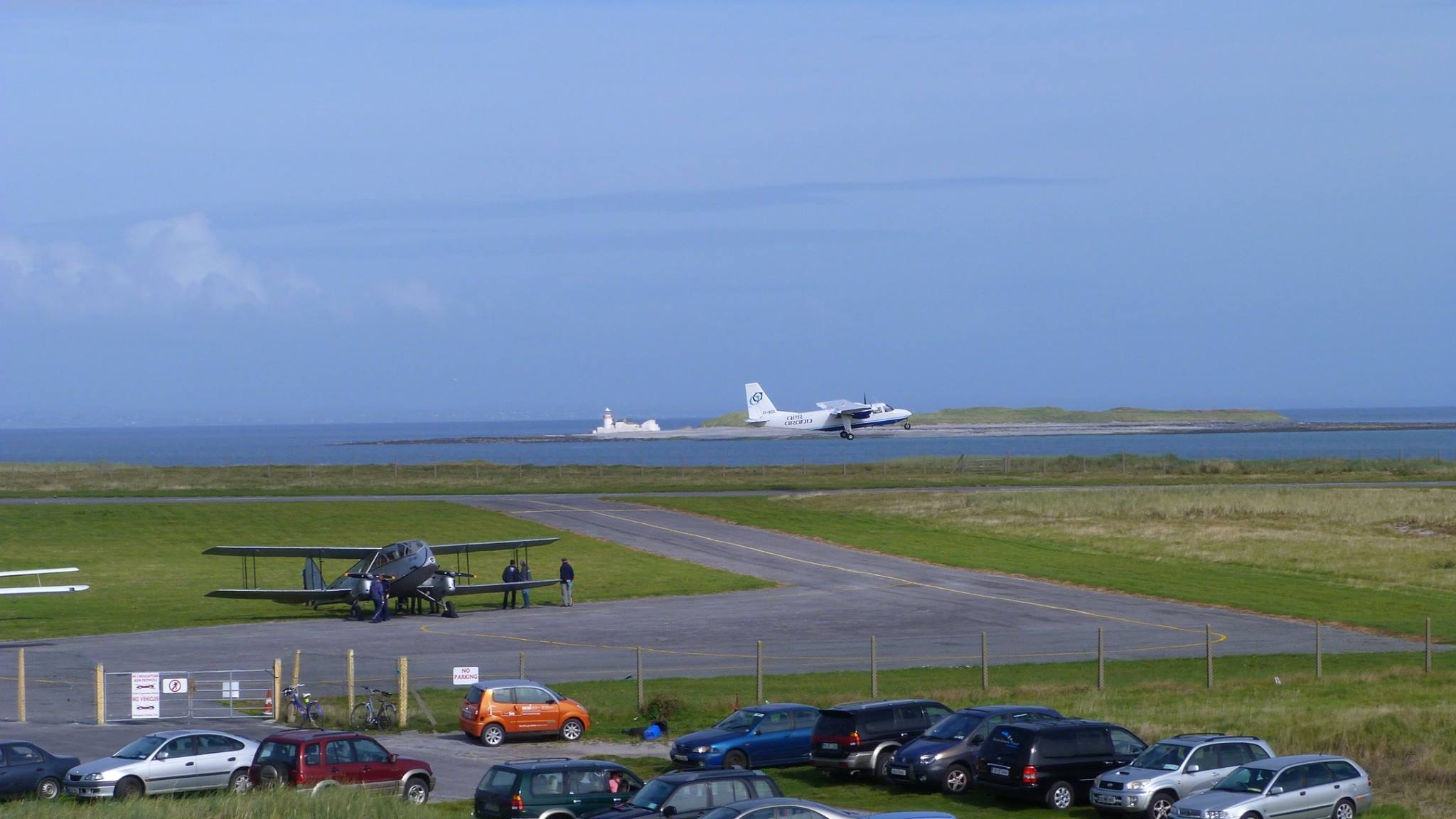 Taking off the day the first Aer Lingus plane, the Iolair, visited Árainn in September 2013

Over the years, the Aer Arann marathon has become part of the island calendar of highlights and the Ó’Céidigh family and the Aer Arann staff have raised hundreds of thousands of euro for Temple Street hospital in Dublin.

The awarding of government contracts has always been a thorny issue as accusations of favouritism can be levelled if the tendering procedure is not transparent. In fairness, it would seem that this process has been handled by the government procurement agency and we don’t question its independence or the competency of the new operators.

We will leave it to others better qualified to judge what has happened on this occasion except to say that it is essential that the process by which this change of operator has occurred, is made clear. Tendering can, on occasion, result in the wrong outcome even if all the rules are followed.

One does not have to be an aeronautical engineer to know that a helicopter is much more expensive to operate than the Britten-Norman Islander plane which was designed with this type of short landing and takeoff in mind. Operating from Galway also appears to be a backward step as Aerfort Na Minne is so much closer to the islands. 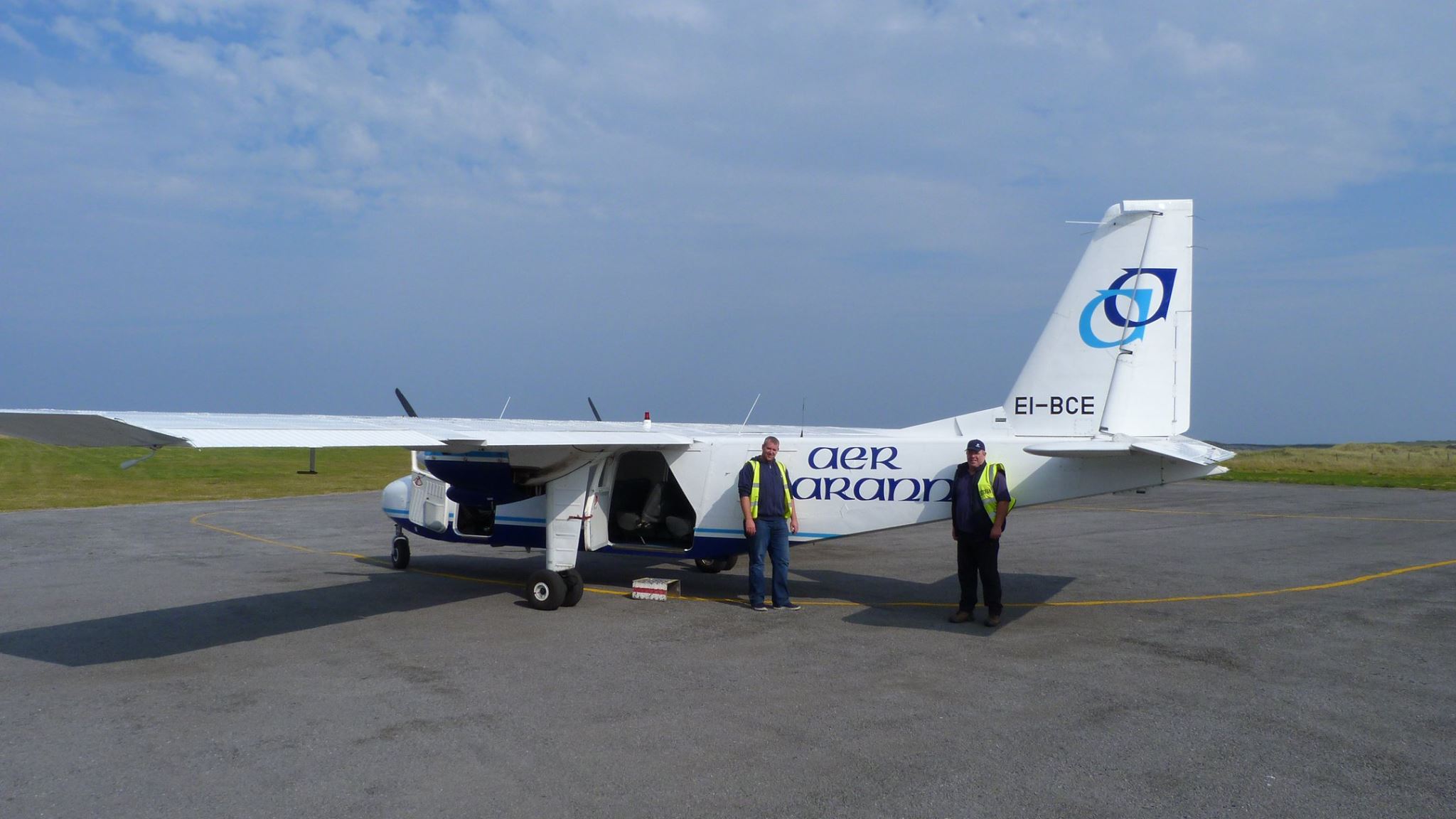 We must admit that we are prejudiced, as we know and trust the operators who have served us well since 1970 but perhaps the authorities might examine again whether the new proposal is in the long term interest of anybody. The new operators may well do a great job but can we afford to take the chance of it all going wrong? By then, there will probably not be an Aer Arann alternative to fall back on.

The Britten-Norman Islander plane has served us well for 45 years and on many occasions managed to keep the islands connected to the mainland when all ferry services were cancelled. The Atlantic weather of the West coast is both challenging and unpredictable.

If it comes to pass that the Aer Arann service will cease forever, all we will have left are the great memories of the people who kept this service going through thick and thin.

We have a duty to the men and women, now long gone, who brought it into being, to question how and why the service that they started, against all the odds, should so suddenly cease to be.