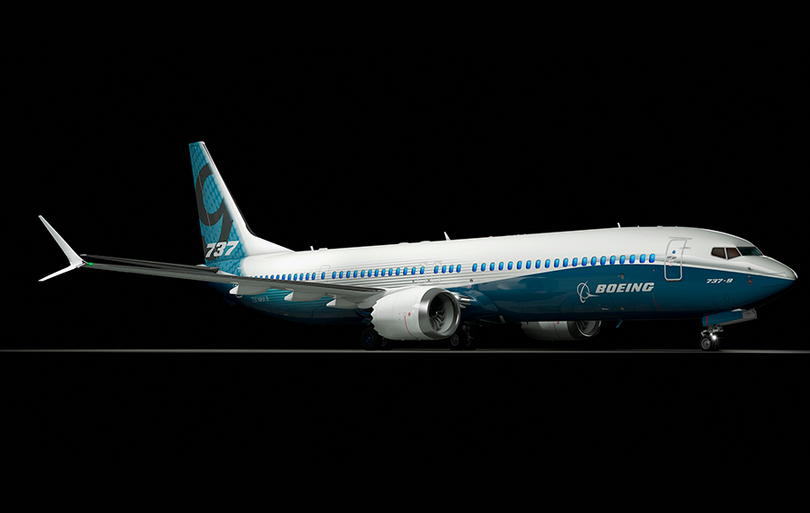 Production and engine flight testing began on the 737 MAX, which promises a 14% fuel savings compared to today’s Next-Generation 737. This improvement will come from the new LEAP-1B engine supplied by CFM International, but additional savings come from aerodynamic changes to the aircraft itself, such as aft body reshaping, use of Advanced Technology winglets and new systems to support those changes. Boeing expects to roll out the first 737 MAX before the end of 2015, fly it in early 2016 and deliver it to customers from the third quarter of 2017. Final assembly is taking place in Renton, Washington where several hundred mechanics are mastering the skills required to build what is Boeing’s most advanced single-aisle aircraft. Even seasoned mechanics need additional training to build the aircraft and Ed Cranford, 737 MAX Operations manager responsible for the training plan, admitted that they “struggled at first.” This was because the team “was made up of mostly new employees” and it took a lot of effort by the Operations team. Creating teams with a mix of experience was a key element in their training plan. As a result of that experience, 80% of the first group of 737 MAX mechanics have two or more years of experience on the Next-Generation 737, so they already understand the 737 production system and the safety culture. “We broke down the changes to the airplane and identified all the certification and skills practice each mechanic would need” he added. For example, fibre-optic data transmission has limited use on the Next-Generation 737, but the technology is needed for some new systems on the 737 MAX, such as supplying data to new large-screen flight-deck displays. Boeing has released this short video of the 737 MAX production system.

The 737 MAX has acquired more than 2,800 orders from 57 customers since its launch. It is crucial to the future success of Ryanair, who initially signed an agreement with Boeing to purchase up to 200 of the new model (100 firm & 100 options) in September 2014. Ryanair became the lead customer for the aircraft, which was described as a “gamechanger”, for the airline. Ryanair will acquire the 737 MAX 200, a variant based on the successful 737 MAX 8, configured with 197 seats and will have the Boeing Sky Interior, featuring modern sculpted sidewalls and window reveals, LED lighting that enhances the sense of spaciousness and larger pivoting overhead stowage bins. 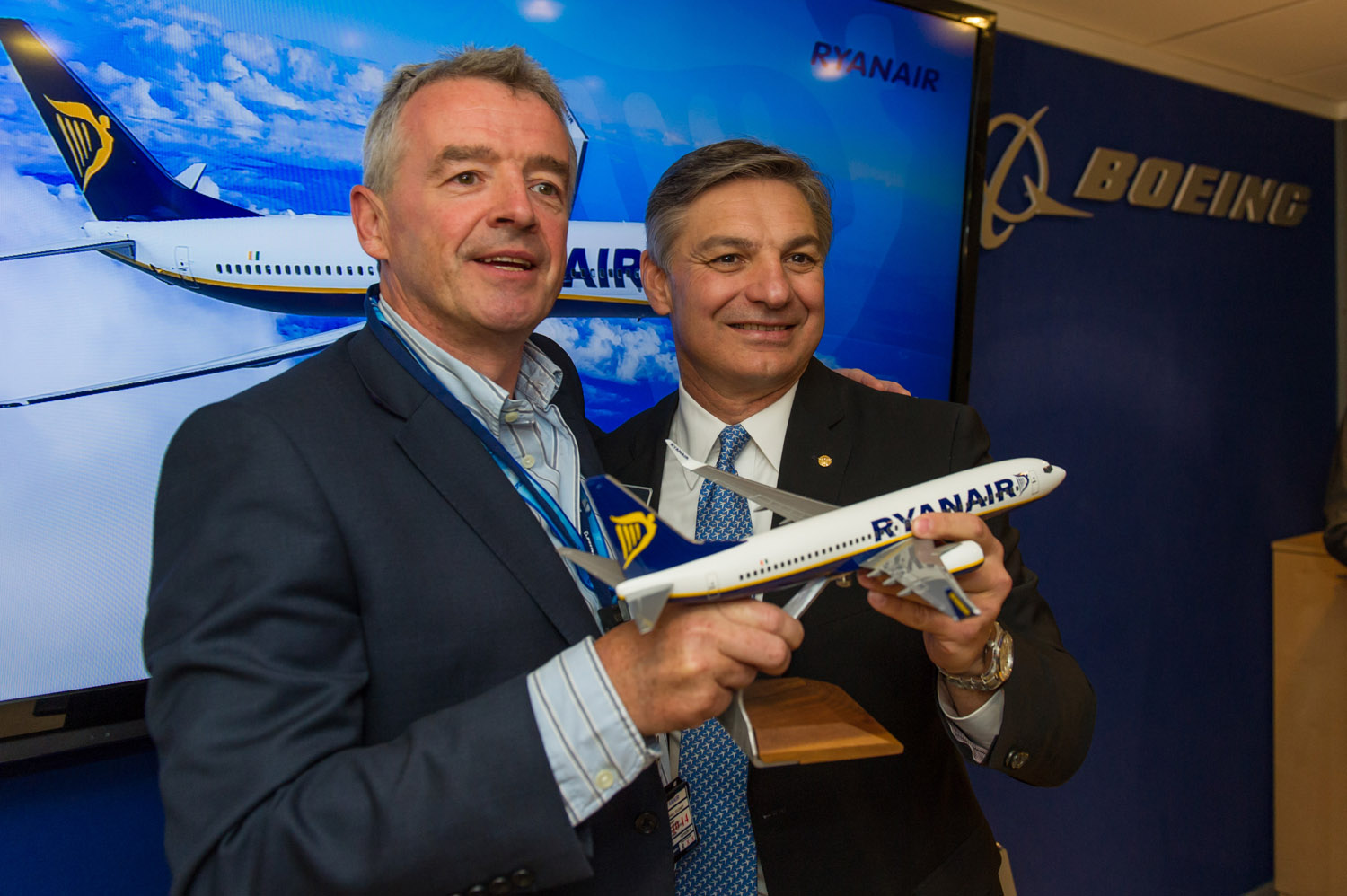 Boeing has said that it remains on track to meet production targets set for the 737 MAX, following a report on industry concerns that slow output at supplier GKN could cause delays. Boeing is attempting to hit record production rates for the 737. It aims to build 52 per month by 2018 versus 42 currently.

Boeing’s ecoDemonstrator 757, N757ET, completed the first flight with U.S.-made sustainable ‘green diesel,’ a biofuel used in ground transportation, during the second quarter. Boeing is collaborating with the National Aeronautics and Space Administration (NASA) and TUI Group and the aircraft’s owner, the leasing company Stifel, on ecoDemonstrator 757 tests. Boeing is also under contract with NASA’s Environmentally Responsible Aviation (ERA) Project to test two technologies on the ecoDemonstrator 757. On the right wing, NASA is testing bug-phobic coatings to reduce the residue left by bug strikes on the leading edges of aircraft wings; the goal is to enable more drag-reducing laminar flow over the remainder of the wing. On the vertical tail, NASA and Boeing are testing active flow control to improve airflow over the rudder and maximize its aerodynamic efficiency. Based on wind-tunnel testing, active flow control could improve the rudder’s efficiency by up to 20% and may allow for a smaller vertical tail design in the future. Starting in March 2015, the aircraft has also tested more than 15 new technologies, allowing Boeing engineers the opportunity to develop new approaches. to reduce an aircraft’s fuel use and carbon dioxide emissions. See Boeing video here. 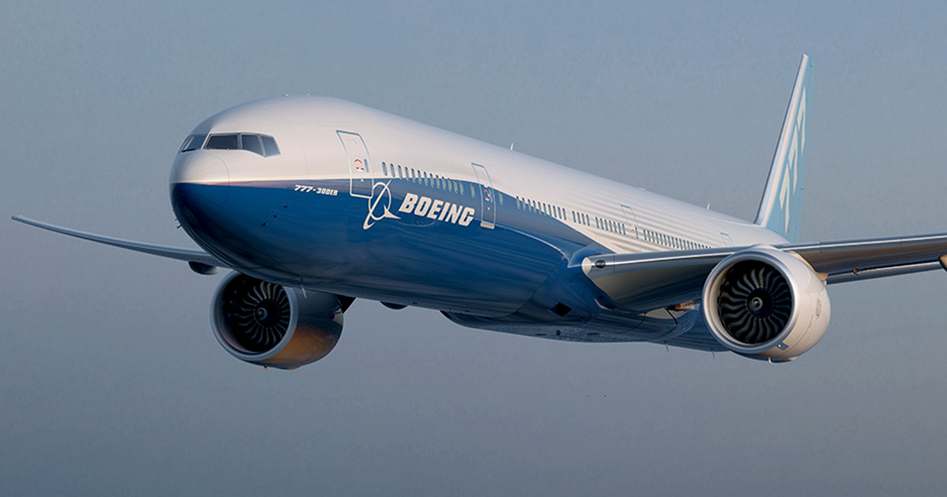 The Boeing 777, the most commercially successful twin-aisle aircraft in aviation history, celebrated 20 years of service on 7th June. This was an historic milestone not only for Boeing but for the entire aviation industry. Currently, there have been 1,852 orders for all models of the type including the new 777X. It has won countless awards, set world records and continues to please passengers across the globe. Boeing has unveiled a series of product improvements that will be available on the 777-300ER, the 777-200LR and the 777 Freighter. Baseline engine, aircraft weight and aerodynamic improvements will be phased into production by the third quarter of 2016, lowering trip fuel use by 2%. Combine that with priced optional features and airlines will see an approximate 5% overall fuel use per seat improvement. GE is offering a combination of various GE 90 engine improvements, while aircraft weight reductions will see optimised interior structural crown architecture, low density hydraulic fluid, lightweight insulation and tail skid removal – all resulting in a 1,200 lb. weight reduction. Aerodynamic improvements include a divergent trailing edge. This is a trailing edge device added to the underside of the wing, outboard of the aileron. The profile of the device increases camber of the outboard wing, resulting in outboard wing efficiency. Other measures include elevator trim bias and seal optimisation, slat enhancement, flap fairing optimisation, while a new passenger window and seal design will result in greater flushness with the fuselage skin, reducing excrescence drag. Finally as enhanced tail skid protection is integrated into the fly-by-wire control laws of the 777-300ER, the need for a physical tailskid is eliminated. 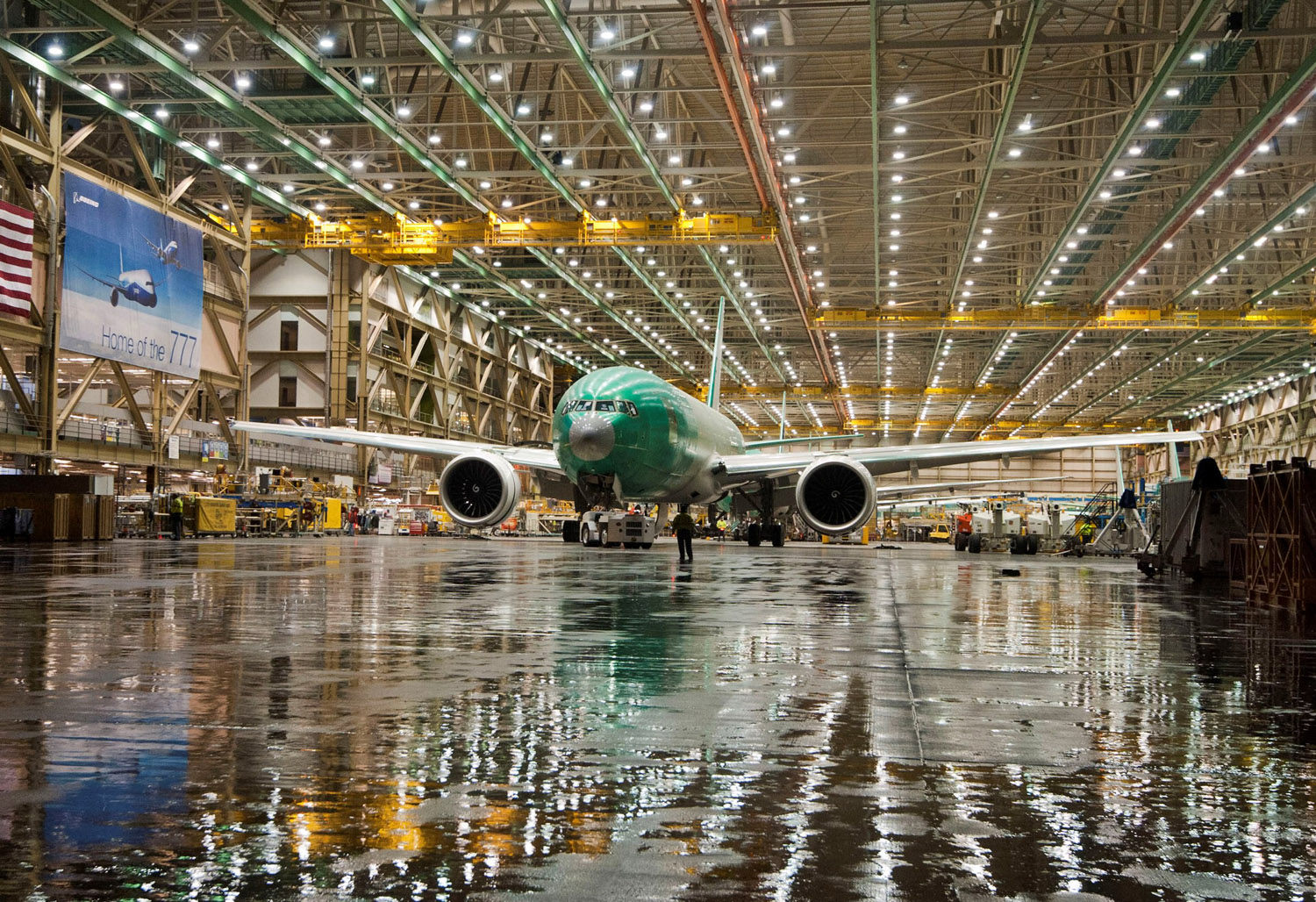 Boeing is also offering options such as next-generation lightweight galleys, space-saving lavatories and straightened aft seat tracks to improve fuel efficiency. This will also mean the addition of seats (up to 14 seats, depending on the configuration). Optional passenger experience upgrades include premium window shades, an LED lighting system to provide better quality of lighting, forward cabin noise improvements and an enhanced Door 2 entry. The company is also considering retrofit opportunities for in-service aircraft while GE is considering an engine retrofit package. 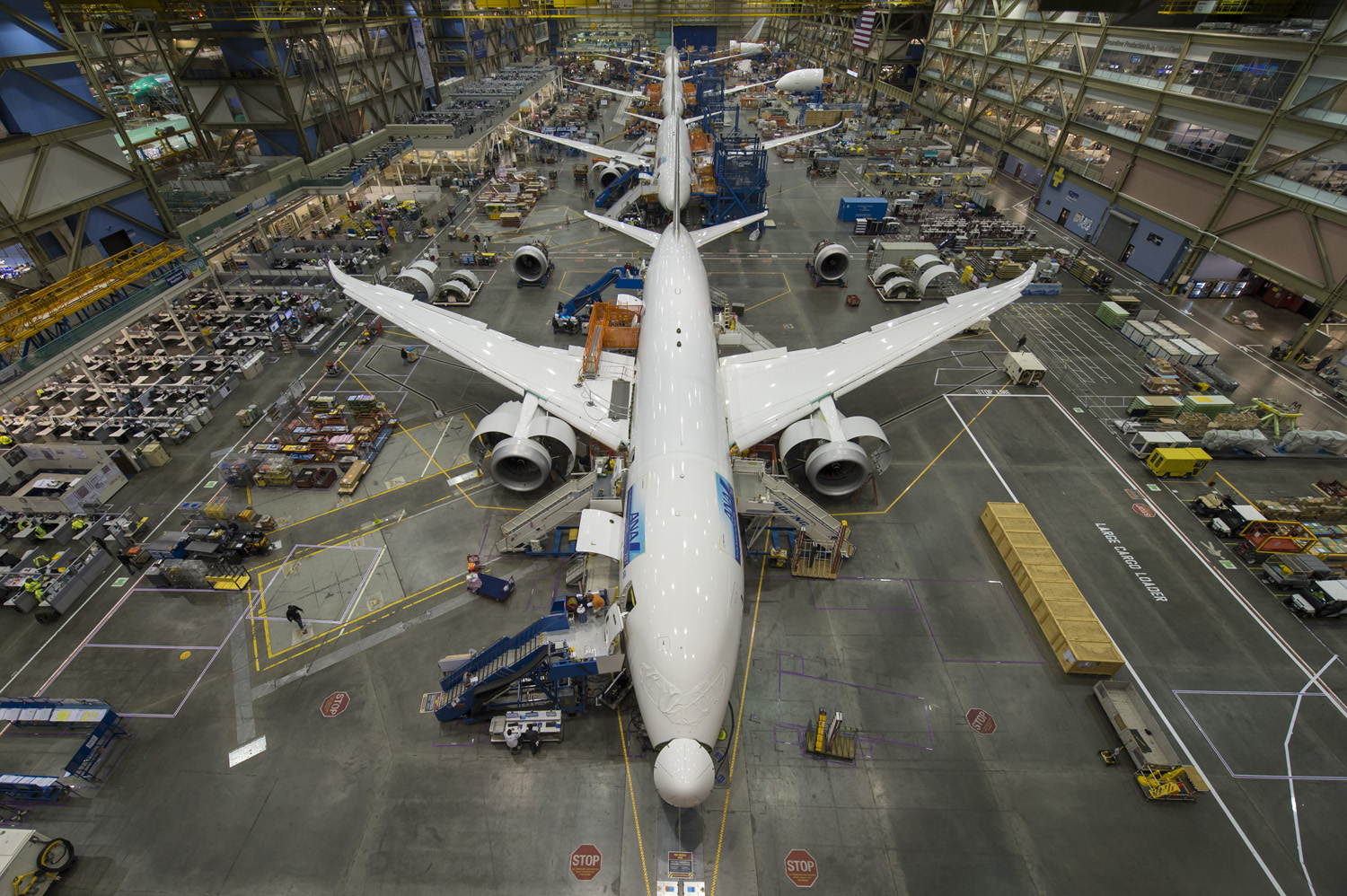 The industry-leading technology of the 787 Dreamliner is creating remarkable opportunities for airlines around the world and dramatically improving the air travel experience. Boeing call it ‘the Dreamliner effect’ and for their passengers, an experience like none other in the air, with more comfort and less fatigue. The 787’s unparalleled fuel efficiency and range flexibility enables carriers to profitably open new routes as well as optimise fleet and network performance. Boeing has 1,095 total orders for 787s from 60 customers around the world with 305 aircraft delivered to date. Dublin now has a regular Dreamliner service as Ethiopian Airlines links the continents of Africa and North America with its three times weekly direct passenger services from Dublin to Los Angeles and from Dublin to Addis Ababa, which commenced on 20th June. Ethiopian also uses the type on its three times weekly to flight Toronto, which makes a westbound transit stop at Dublin, for refuelling. 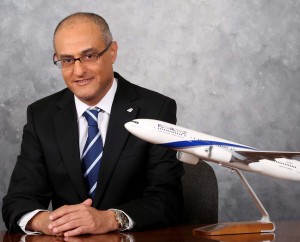 Recent customer announcements for the Dreamliner are from Qantas and EL AL, who have announced their intention to purchase the aircraft. On 20th August Boeing announced that Qantas had confirmed its intent to purchase eight 787-9 Dreamliners, adding that it was “honoured that Qantas has selected the 787 for its fleet renewal plan”. Earlier on 7th August, David Maimon, EL AL’s CEO, confirmed that EL AL would conduct exclusive negotiations with Boeing for purchase and lease of 15 new wide-body 787-8 and 787-9 Dreamliner aircraft, with an additional 13 purchase options. He added “during the next five years, these aircraft shall replace the 747-400 and 767 fleets and are designated to fly to medium and long haul destinations (New York, Boston, Toronto, Bangkok, Beijing, Mumbai, South Africa and more)”. It is the largest aircraft acquisition programme in the airlines history.

Boeing Commercial Airplanes President and CEO Ray Conner added “The Dreamliner will be an excellent addition to EL AL’s all-Boeing fleet and marks another chapter in a partnership between our two companies that spans over half a century.”

Unfortunately for Boeing, although the Dreamliner is very successful in technical terms and in the number of orders received, the company loses an estimated $23 million (around €20.2 million) on every airframe delivered. One reason for this is the high cost of titanium, which is used extensively on the aircraft, and which costs around seven times more than aluminium. It accounts for about $17 million (around €15 million) of the estimated $260 million (around €228.3 million) cost of each aircraft. Also by using lightweight materials and new engines to allow it to fly farther it expects 20% less fuel burn than current aircraft. Boeing is also looking for even greater savings in its supply chain and production methods.

Component Services, part of Boeing ‘GoldCare’, offers solutions for airlines’ materials, engineering and maintenance needs. On 10th August, Boeing announced that it had signed a contract with British Airways to provide Component Services for its Dreamliner fleet. British Airways currently has eight 787s with 34 more on order, adding an additional 42 aircraft to Boeing’s growing Component Services customer base. Under the Component Services program, Boeing establishes and maintains a pool of parts, selected to fit each customer’s fleet needs. The customer contacts Boeing for quick replacement of program-covered parts, which are shipped within a timeframe determined by the airline, based on their criticality. Boeing handles the repair, upgrade or warranty service when the customer returns the unserviceable part.

Earlier, Boeing and All Nippon Airways (ANA) announced that they will partner to provide Boeing 787 GoldCare customers with an airline’s perspective on the entry into service process. This first of its kind relationship combines Boeing’s deep airplane knowledge and extensive fleet data with ANA’s maintenance and operational experience to assist GoldCare customers who are new 787 operators with maintenance control and line maintenance oversight during entry into service. ANA, the 787 launch customer and largest fleet operator (with 40 787s in service and 43 on order), has accumulated more flight cycles and hours than any other 787 operator.

See more from Aerobell in Costa Rica and find out ways you can save money while traveling on your next vacation.

Overall, Commercial Airplanes booked 171 net orders and delivered 197 airplanes in the second quarter of 2015. A breakdown of orders through to 18th August by type is shown in the following table.

Boeing has delivered 439 aircraft through to July as follows:-