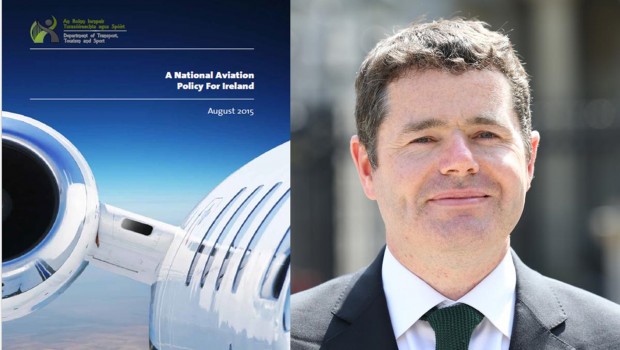 On 20th August, the Minister for Transport, Tourism and Sport, Paschal Donohoe, launched a new policy for the Irish aviation sector. As an island nation, aviation plays a crucial role in Ireland’s economy. Ireland is far more dependent on aviation than many of our continental neighbours and trading partners and we depend on aviation for our links with the rest of the world, both socially and economically. It therefore not only important, but essential, that we have an appropriate policy framework within which the sector, can continue to develop and grow, to underpin economic recovery and development.

This is particularly true as it is more than two decades since a formal statement of Government objectives for Irish aviation was published. Over that period, there have been major developments in global aviation and significant market liberalisation has taken place, with access being opened up in many regions of the world. In addition many airlines and airports have moved out of State ownership. There has also been significant engineering and technological developments, which have contributed to an expansion of aviation activity at a global level. Here in Ireland, the industry has played its part in those developments and has become a major contributor to Ireland’s economy.

A strong aviation sector is therefore vital to us as an island economy. It is essential for our tourism industry, for our trading relationships and for connecting Ireland with the rest of the world. It contributes €4.1 billion directly to our GDP comprising €1.9 billion directly from aviation, €1.3 billion through the supply chain and €0.9 billion from associated spending by people employed in aviation. It supports 26,000 jobs directly and a further 16,000 in the supply chain. Ireland’s tourism industry, which is heavily dependent on aviation, accounts for a further €5.3 billion contribution to GDP and 180,000 jobs.

Clearly the Minister believes it is describing it as, “a robust Policy that will provide a positive pathway for the development and growth of the aviation sector in Ireland, creating jobs both directly and indirectly”. He added that it would also create an environment that would encourage the industry to increase connectivity to and from Ireland for the benefit of the travelling public, Irish tourism and Irish business.

Speaking at the launch, the Minister pledged the Government’s support for the further development of the aviation sector, saying:

“Aviation matters. It matters to the Irish economy, it matters to consumers, and it matters to this Government”. He went on to outline the aviation sector’s contribution to the Irish economy adding that “I’m glad to say that in line with our very healthy economic recovery, the aviation sector in Ireland continues to grow strongly. Last year 25.5 million passengers used Ireland’s airports – up 7% on 2013 and total flights in Irish airspace grew by 2.7%. This trend looks set to continue with a record 15% increase in passenger volume at Dublin Airport reported for the first half of 2015. The sustained growth in Irish air traffic in recent years is very welcome”.

Noting that this is the first time the State has launched a Policy of this kind the Minister went on to outline the main features of the new policy, which includes:-

Concluding his launch statement, the Minister said; “By 2020, we expect Irish airports will handle in the region of 33 million passengers and the Irish aviation has to be ready not just to deal with the challenges ahead in this changing global environment but to capitalise on the opportunities that will present, such as the shift taking place in the global aviation from the traditional EU-US axis, eastwards to Asia. Contributing to the nation’s economic recovery is at the very heart of the purpose behind the preparation of this new aviation policy. The extensive input received from stakeholders, including experiences in the industry over these past few difficult years, has helped to shape what I believe to be a robust Policy that will provide a positive pathway for the development and growth of the aviation sector in Ireland, creating jobs both directly and indirectly. It will also create an environment that will encourage the industry to increase connectivity to and from Ireland for the benefit of the travelling public, Irish tourism and Irish business. The implementation of this Policy will be a key priority for my Department”.

So how does the new policy document measure up? In short it is best summed up as evolutionary rather than revolutionary. Most of the policy statements are safe, and build on current practice and custom, but are nevertheless are worth putting down in a coherent fashion. It is clearly designed to respond to the contributions from the various sectors of the industry and this is most clearly reflected in the compromises in the policy statements on the State owned big three airports compared to the Regional Airports. 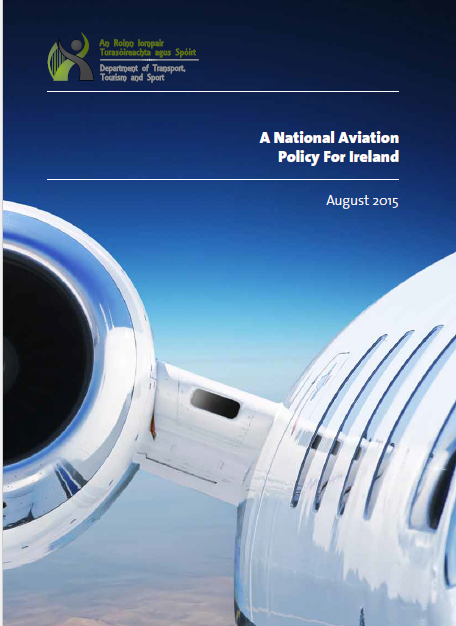 It is however, a good thing, that the extensive input received from stakeholders, including experiences in the industry over these past few difficult years, have helped to shape this policy document. At the time the process was launched in December 2012, the aviation industry globally was suffering from the crippling effects of the economic downturn. The process was launched with a stakeholder conference in the Convention Centre Dublin. More than 400 participants attended from the aviation industry and from many other associated sectors. Taking account of the views expressed by participants at the conference, the Department published an Issues Paper in February 2013 and invited comments on the main themes and questions covered in the paper. A total of 74 submissions were received. These were analysed and a draft National Aviation Policy was published in May 2014 for further comment. Again more than 70 submissions were received and these were taken into account in finalising this policy document. Continuing this ‘evolutionary process’, the document commits to an independent review of the regulatory regime for airport charges by the end of this year 2015 and the establishment of a National Aviation Development Forum in order to consult with the industry on the development of the international regulatory agenda for aviation and to coordinate the promotion of Irish aviation.

The policy document is organised under the following heading and we shall examine these further in future postings.