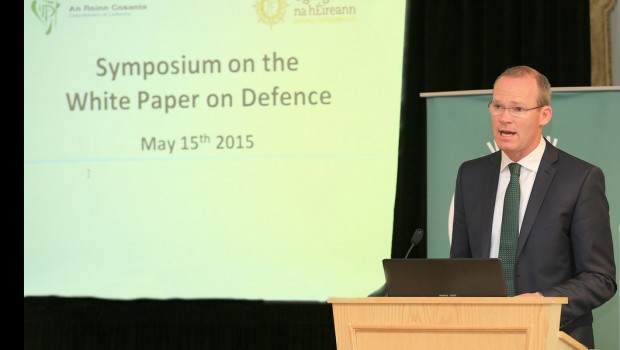 Ireland’s first White Paper on Defence was published in 2000. In the intervening period there have been significant changes in the security environment and the emergence of new and complex challenges. In this context, the Government decided that there was a requirement to prepare a new White Paper on Defence.

A key part of the development of the White Paper on Defence has been an engagement with key stakeholders in particular and the wider community in general. The publication of a Green Paper on Defence in July 2013 initiated the public consultation on the White Paper on Defence. A total of 122 written submissions were received. Discussions were also held with other Government Departments on cross-cutting policy issues and likely future demands from Government bodies and State agencies. The views of international organisations were also sought with a particular focus on likely future trends in international peace support operations. However, the views of individuals and organisations, although valuable, do not constitute debate and the Minister felt that there was a requirement to bring interested stakeholders and experts together.

Therefore in advance of completion of the White Paper, he decided to afford a wide stakeholder group the opportunity to engage in debate across a number of issues. As a concluding phase to the process, he hosted a symposium on the White Paper in Farmleigh House on 15th May. The audience comprised top level civil and military staff of the Department of Defence and the Defence Forces, representatives from across Irish State Departments, representatives from Irish and international think tanks and academic institutions, international organisations including EU, UN, NATO, the Representative and official veterans Associations of the Defence Forces and other interested parties. The approach of utilising open policy debates as a means to inform policy formulation is a key strategy within the Government’s Civil Service Renewal Plan.

Lt. Gen. Conor O’Boyle Chief of Staff speaking at the symposium on the White Paper on Defence

The format consisted of panels of experts who gave their opinions on a number of topics throughout the day. The Symposium was structured to generate an interactive debate with the audience. Each panellist was given the opportunity to discuss the merits or otherwise of a particular approach. The discussion was then opened to the wider audience for debate.

The sessions were grouped around ‘policy emphases’. These represented key differences in “direction of travel” advocated by various interested parties in the course of the consultation process. The sessions were not designed to be exhaustive or mutually exclusive. Rather, they were intended to provide a framework within which particular courses of action could be championed and challenged.

What are the key decisions for the new White Paper to address?

First and foremost the level of Defence expenditure needs to be reviewed. The last review was as part of the 2015-2017 Comprehensive Review of Expenditure (CRE) process. This was essentially part of the austerity process and was designed to reduce expenditure. This set the Defence Vote at €677 million for 2015. Some €496 million (73%) of this allocation provides for the pay and allowances of up to 9,500 Permanent Defence Force (PDF) personnel, 625 civilian employees and 350 civil servants. The remaining €181 million (27%) provides mainly for non-pay costs relating to the replacement and maintenance of essential equipment and infrastructure, together with ongoing operational costs for all three services. All expenditure decisions are therefore restricted to this small expenditure window, even though the Defence Forces, unlike any other branch of the public service, was expected to contribute to capital expenditure by selling off existing assets, particularly property, mainly army barracks. This is hardly a viable option into the future.

While each country pursues a Defence policy that reflects its particular requirements, our policies have resulted in Ireland having the lowest Defence expenditure (including Army Pensions) of other neutral countries in the European Union. The latest comparable figures on Defence expenditure, as a percentage of GDP, obtained from the European Defence Agency, show that, in 2012, Ireland’s Defence expenditure was only 0.55% of GDP. For Malta it was 0.58%, Austria 0.80%, Sweden 1.13% and Finland 1.47%.

The Government is however committed to maintaining the stabilised strength of the Permanent Defence Force at or close to 9,500 personnel, comprising of 7,520 Army, 886 Air Corps and 1,094 Naval Service. Since September 2013, all strength figures have been calculated on the basis of actual numbers serving, excluding those members on secondment or career breaks. Figures over the past three years show that in spite of this commitment, the actual strength has been below this authorised figure. On the 31st December of each of the last three years the totals were 9,359 (2012), 9,236 (2013) and 9,280 (2014). The most recent figures for total serving strength as of 30th April 2015, across all three services, was 9,112 (comprising of 553 or 6.1% female and 8559 or 93.9% male). Currently the Air Corps has 766 personnel, including 18 Air Corps Cadets, some 120 short of its establishment figure. There are vacancies for 36 officers and 35 NCOs as well as for 49 airmen.

Minister Coveney has said that Defence policy is “a critical aspect of Government policy” and that he was determined to ensure that the new White Paper fully addresses the Defence response to future security challenges, and related resource requirements, in a comprehensive way. Speaking in the Dáil on 24th March, the Minister said that he envisaged that “defence spending in Ireland over the next ten years will need to increase. New challenges must be faced, Ireland has a huge marine resource that must be protected, airspace that must be managed and it has natural resources that must also be part of that security threat assessment. 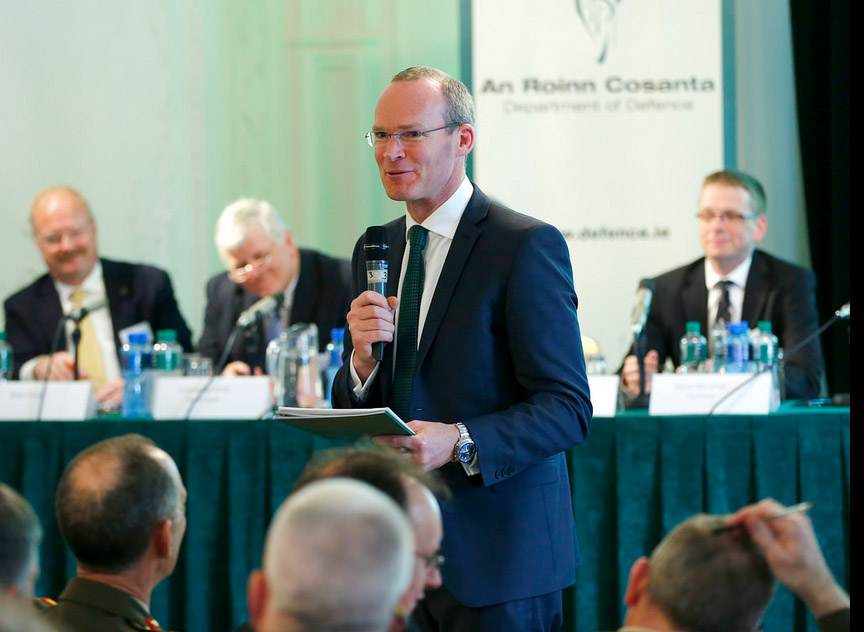 He went on “In addition, Ireland has an increasing responsibility abroad in terms of peacekeeping, conflict management, post-conflict stabilisation and so on. I would like to see an increasing budget for defence to be able to do all those things”. “However, that must be negotiated and will not happen in a single year. My view on the White Paper is that over the next decade, the State will work towards putting in place a modern, well-resourced defence infrastructure which I believe will require increases in budget over time” he added.

Specifically in relation to Aviation and the Air Corps he said: “First and foremost, we need to improve our capacity to monitor what is happening in our airspace and in international airspace for which the Irish Aviation Authority has responsibility. That is why I mentioned that we are looking in some detail at the cost and equipment that would be required to improve long range radar capacity along the west coast in particular. That is the first step. We will have an opportunity in the context of the broader White Paper to discuss what we should or should not be doing in terms of the Air Corps and its future role. It is important to be realistic. The cost of putting together a fleet of fighter jets is probably similar to all the defence spending in Ireland put together. We are unlikely to be pursuing that course of action, although we have to have an open mind. Instead, we need to look at improved surveillance so that we understand and have a detailed knowledge of what is happening in our airspace”. The previous White Paper on Defence (2000) set out the current role of the Air Corps which is to provide a range of military and non-military air services. “The Air Corps is not currently tasked or equipped with radar equipment to monitor military aircraft overflying Irish controlled airspace” the Minister noted.

Speaking at the Symposium on the White Paper on Defence Farmleigh House on 15th May, Minister Coveney said, that while he believed that Defence “was among the most important policies pursued by Government”, Defence it is an area of public expenditure “where the benefits accruing from expenditure are not always immediately evident to the general public”. That is why that, apart from providing for the defence of the State, Defence inputs into a wide range of other roles including the provision of air ambulance services, support to the Garda Air Support unit etc.

The work of the Defence Forces involves planned responses to a wide variety of contingencies. There are significant cross-cutting policy dimensions to this work and multiple Departments and Agencies with whom Defence does business. Many submissions to the White Paper process advocated increased defence contributions to areas where other Government Departments retain the policy lead. A key part of the consultation process entailed consulting with those Departments and eliciting their views on future required supports and funding implications.

There is a long track record of Government maximising the utilising of defence assets for the benefit of State through their usage in support roles. Having regard to maintaining a wider perspective on possible defence initiatives the Minister told the Farmleigh gathering that he had “established an external advisory Group to provide me with additional supports in preparing the White Paper. This Group feeds into the work of the Department’s joint Civil Military White Paper Steering team. There are a number of new initiatives being advanced by this Group.” 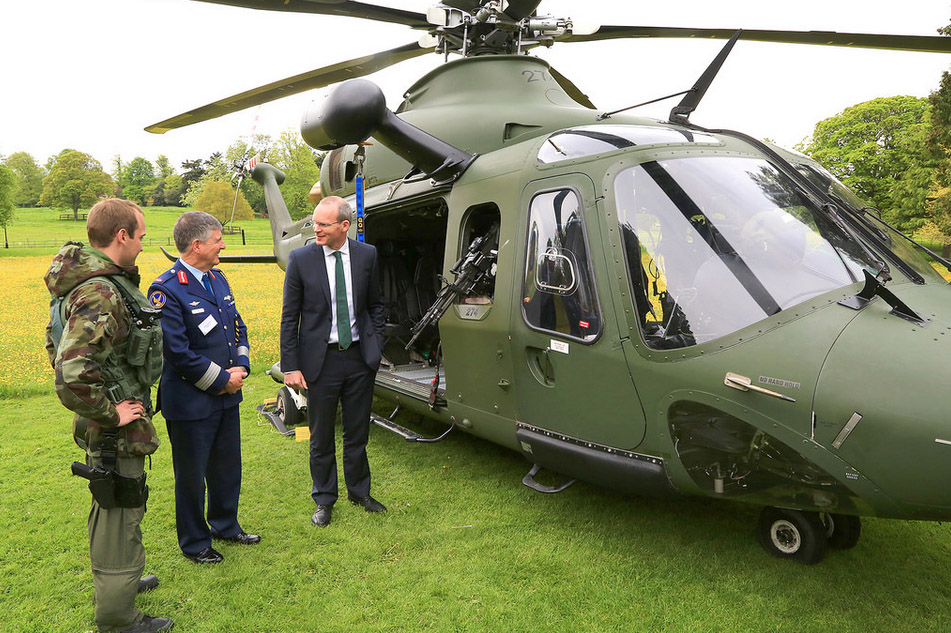 The Minister has engaged in a comprehensive and wide ranging process which should deliver a policy framework, in the form of the White Paper, which will provide the basis for a relevant and well equipped force, that will meet the country’s needs, both militarily and in the provision of other vital services for the citizens of the country. He is to be commended for his approach to date.