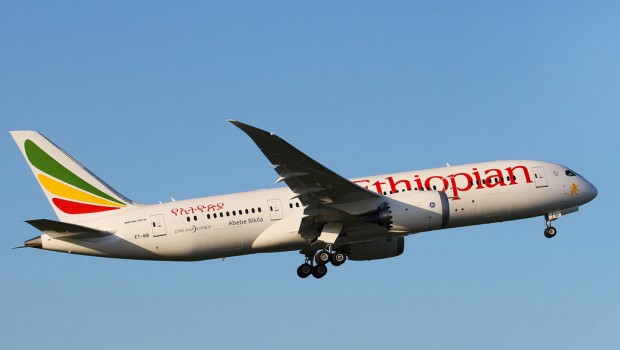 Photo above by Donal Morrissey

Dublin Airport welcomed the inaugural Ethiopian’s service from Addis Ababa, the ET504, which operates onwards from Dublin to Los Angeles on 20th June. The arrival of the first flight operated by Boeing 787-8 ‘Dreamliner’, ET-ASI at 04:56 and its subsequent departure to Los Angeles, marked the first time the three continents of Africa, Europe and North America, were directly connected with one airline through Dublin Airport. ET-ASI had previously paid a number of visits to Dublin, the first being on 28th May, when it operated the ET502 (Addis Ababa – Dublin – Toronto), one of the two early morning services, which stopover in Dublin for refuelling on the westbound leg of their journeys only. ET-ASI, named ‘Abebe Bikila’, which is leased from AerCap, is the latest ‘Dreamliner’ in Ethiopian’s 13 strong fleet having been only been delivered on 22nd May. Also on the ground in Dublin on that morning was ‘Dreamliner’ ET-AOU operating the ET502 and Boeing 777-260LR, ET-ANQ operating the ET500 (Addis Ababa – Dublin – Washington). These aircraft arrived in Dublin at 05:01 and 04:38 respectively. 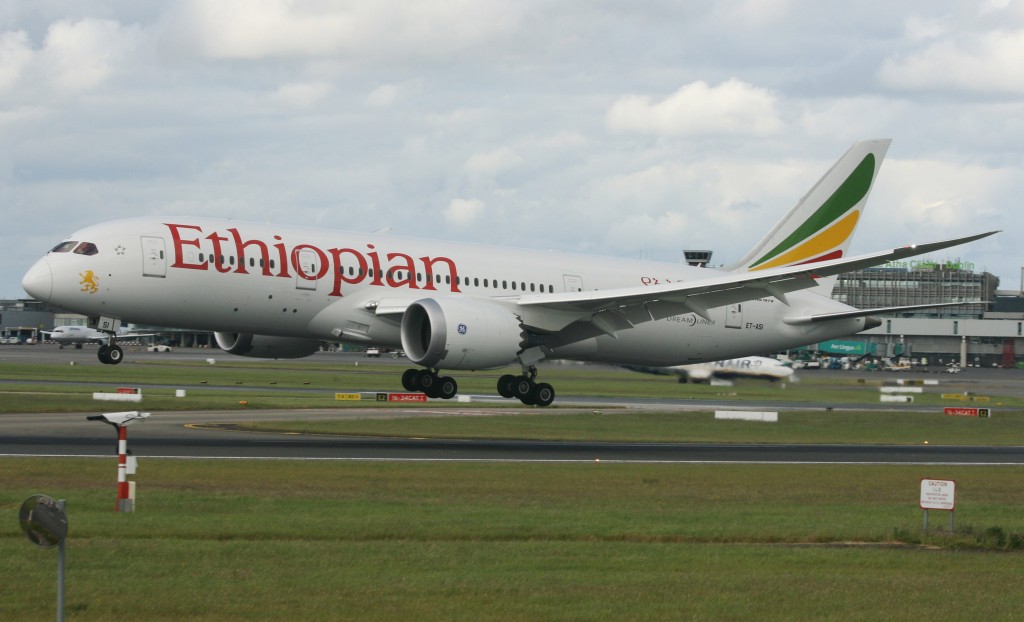 Ethiopian Airlines B787-8 ET-ASI landing on 28 on inaugural flight from LAX. Jim Lee.

Welcoming the inaugural flight daa Chief Executive, Kevin Toland said “This is a significant day for Dublin Airport, as we welcome this exciting new route between Addis Ababa, Dublin and Los Angeles. The new service will reconnect Dublin with Los Angeles and bring unrivalled connectivity in Africa, opening up opportunities from its Addis Ababa hub to almost 50 African destinations,”

Michael Yohannes, Irish Area Manager for Ethiopian’s Airlines said the airline is delighted with how the new flights have been received. “We are delighted with how flight bookings are going. The flights have been very well received and the passenger load both to LA and Addis and beyond has surpassed our expectations. The daily tech transit stops which have been in operation since early May are also going very smoothly”. With the addition of Dublin, the airline’s 11th European city and Los Angeles, its 4th point in the Americas, Ethiopian’s international network now covers 87 destinations across 5 continents.

Although the aircraft arrived four minutes earlier than its scheduled time of 05:05, its departure time to Los Angeles of 06:15, was delayed to 07:45, mainly due to the celebratory nature of the inaugural service. The aircraft returned to Addis Ababa, via Dublin as the ET505, departing Los Angeles at 23:45, with a scheduled arrival in Dublin the following evening at 18:30. On 21st the aircraft landed ahead of schedule at 18:05. Departure from Dublin was at 19:45 with an arrival in Addis Ababa at 06:15 the following morning. Days of operation into Dublin from Addis Ababa are Thursday, Saturday and Monday (ET504 at 05:05) and from Los Angeles on Fridays, Sundays and Tuesdays.

After much speculation and media comment, Ethiopian Airlines, announced on 15th June, the purchase of six additional Boeing 787s from Boeing. In a statement it said that the “decision to purchase the equipment was based on the airlines ongoing fleet modernization strategy to operate state-of-the-art and technologically advanced aircraft. The aircraft will begin to arrive at Ethiopian from mid-2016 onwards”.

Mr. Tewolde Gebremariam, Ethiopian Airlines CEO said; “In line with our Vision 2025 strategic road map and our fleet modernization and expansion project, we will keep investing in the latest technology aircrafts which are widely appreciated by our customers.” He added “This new addition to our fleet will not only benefit Ethiopian because of its unmatched operating costs, but will also help us to enhance the overall travel experience of our travellers. The Boeing 787 aircraft has already earned appreciation of our customers and we will continue with our fleet modernization program with our customer’s preferences in mind.”

In a statement from the Paris Air Show at Le Bourget, Boeing said that the order was previously attributed to an unidentified customer on Boeing’s Orders and Deliveries website. There was no immediate confirmation that the aircraft are early model Boeing 787-8s, known as the ‘Terrible Teens’, although it is highly likely, in spite of Mr. Tewolde being previously quoted as saying. “We want to lease them but we will not purchase them. The issue is still under discussion.”

A key reason why Boeing was trying hard to dispose of these early model aircraft is that, they have a 1,600km range penalty, due to higher weights, rendering them less effective than current production models. Boeing was forced to modify these aircraft after flight tests identified a number of faults, including an electric-panel fire, and structural issues with the aircraft’s wings mounts. Heavy structural reinforcements were required to strengthen the aircraft’s composite shells.

Saying only that “The 787 is a perfect fit for Ethiopian’s medium to long haul routes,” Boeing Commercial Airplanes President and CEO Ray Conner added “This order will enable the airline to realize greater efficiencies, improved performance and enhanced passenger comfort, and we look forward to continuing our strong relationship with the airline which goes back to its first order in 1960.”

On 16th June Ethiopian Airlines, announced it had successfully retro-fitted all its Boeing 777 business class seats to full flat configuration. The retro-fitting project on Ethiopians’ eight B777 aircraft has entirely been conducted at the Ethiopian MRO facility with an in-house capability. Zodiac Northwest Aerospace Technologies (ZNAT), ZSUK (Zodiac Seats UK) and Thales are the vendors involved in the project. 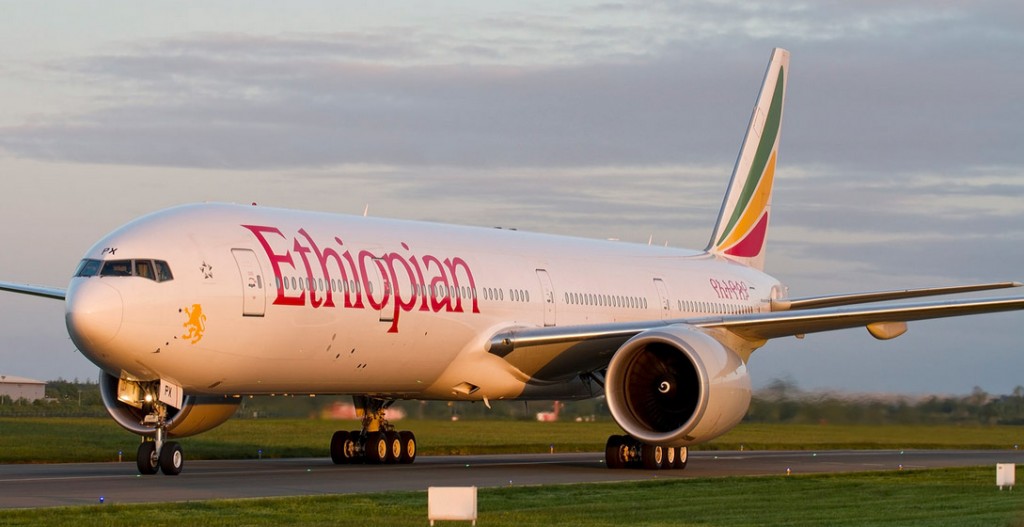 VP MRO Ethiopian Airlines Group, Zemene Nega, remarked, “We are pleased to successfully complete the retrofitting project on our B777 fleet with our in-house capability which is a testament of Ethiopian self-sufficiency in trained aviation professionals. We have made huge investments to accomplish the renovation project which encompasses; modifying seats to full flat laying positions, rearranging passenger service, rework on IFE and software change. It is yet another breakthrough to further enhance our business class passengers’ satisfaction and offer superior travel experience. Going forward, we will continue to work hard to ensure our passengers’ extra comfort and make their experience with Ethiopian a memorable one.”

Ethiopian is the fastest growing Airline in Africa with an ultra-modern and environmentally friendly aircraft fleet and is the youngest fleet in the continent with an average age of less than seven years. It is now a multi-award winning airline, registering an average growth of 25% in the past seven years, and currently operates over 200 daily departures.