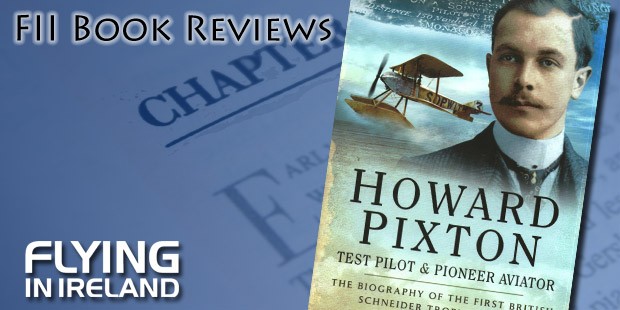 It is likely that many aviation enthusiasts will be unfamiliar with the name Howard Pixton and those that have may not know of the full scope of his achievements. This excellent book, ‘ghosted’ in the first person by his daughter, Stella, goes a long way in rectifying that gap in our knowledge. I enjoyed it thoroughly, not just because of the historical insights which it gave into the golden age of aviation before the First World War (which produced the first 862 British pilots) but also because it is a very good and entertaining read.

Howard Pixton was born into a middle class family in Manchester and grew up in the late Victorian and Edwardian age just as the internal combustion engine was becoming a practical mechanical device. A fall in his family fortunes was to an extent a double-edged sword, as it gave him the necessity as well as the motivation to become an engineering apprentice. He was equipped therefore with a good practical grounding when he made the bold step of applying in1910 for a job in aviation. He was taken on by AV Roe as a mechanic at Brooklands and learned to fly, subsequently working for Bristol and then Sopwith and by 1914 was one of the leading airmen of his day. There are many evocative passages describing events at Brooklands, Hendon and Larkhill, while the reader is also introduced to many of the great pioneering figures, with whom Pixton was on very friendly terms. The descriptive prose draws you into the period when ‘no one flew, in anything but calm conditions’, apart that is from Howard Pixton, who was one of the first to learn how to cope with flying in adverse weather. He also became a noted instructor, whose three golden rules were, ‘never strain a machine, never to stall and never to turn back when the motor fails after take off.’ He also participated in early sales tours to France, Spain, Germany and Rumania, took part in air races and endurance events, the famous military trials at Larkhill in 1912 and won the Schneider Trophy in a Sopwith Tabloid seaplane in 1914. During the First World War he was a pilot at the Aeronautical Inspection Department, testing and accepting for service (or not) newly constructed military aircraft. By 1918 he estimated that he had flown more than 80 types in 3500 flying hours. He also came to Ireland in 1918, on a mission through 24 counties looking for potential airfields and landing sites.

It is impossible to read this book and not come away full of admiration for Howard Pixton and his contemporaries, who in a few short years changed the aeroplane from a sporting novelty to a practical means of carrying out a huge variety of roles.

The text is enhanced by a splendid collection of photographs and an absorbing appendix of documents. Highly recommended.