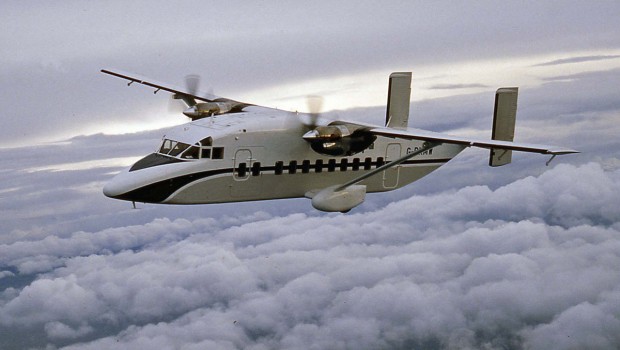 This is the story of the C-23 Sherpa built by Short Brothers of Belfast, Northern Ireland, over thirteen years, 1984-1997. A total of sixty (60) C-23s in three variants were delivered to several branches of the U.S. military and remained in continuous service until 2014. The success of this program is due to the efforts of many in Northern Ireland and the United States.

The Shorts C-23 story starts with a decision in 1981 to modify the Model 330 passenger aircraft to provide a downward-opening rear ramp and open interior to allow paratrooper seats along the side fuselage and large tie-down cargo. The aircraft has a large cargo door forward of the wing on the left side. The 330 had proven to be a workhorse for regional airlines around the world, and this major modification was undertaken to provide the market with a tough, versatile, low-cost aircraft with a 7,500 pound payload and large interior, powered by Pratt & Whitney Canada’s PT6A-45R turboprop engines. The Sherpa’s first flight was in 1982.

The initial application for the aircraft came about the same time as first flight in the form of a solicitation by the United States Air Force (USAF) for its new European Distribution System Aircraft (EDSA). This program was initiated by General Billy Minter, commander of USAF in Europe, who wanted an aircraft to expedite and distribute spare parts among the air force’s many European bases during wartime. It was General Minter’s intent that the subject aircraft would remain in the system during wartime, being too small to be pulled from its EDSA role for other missions. 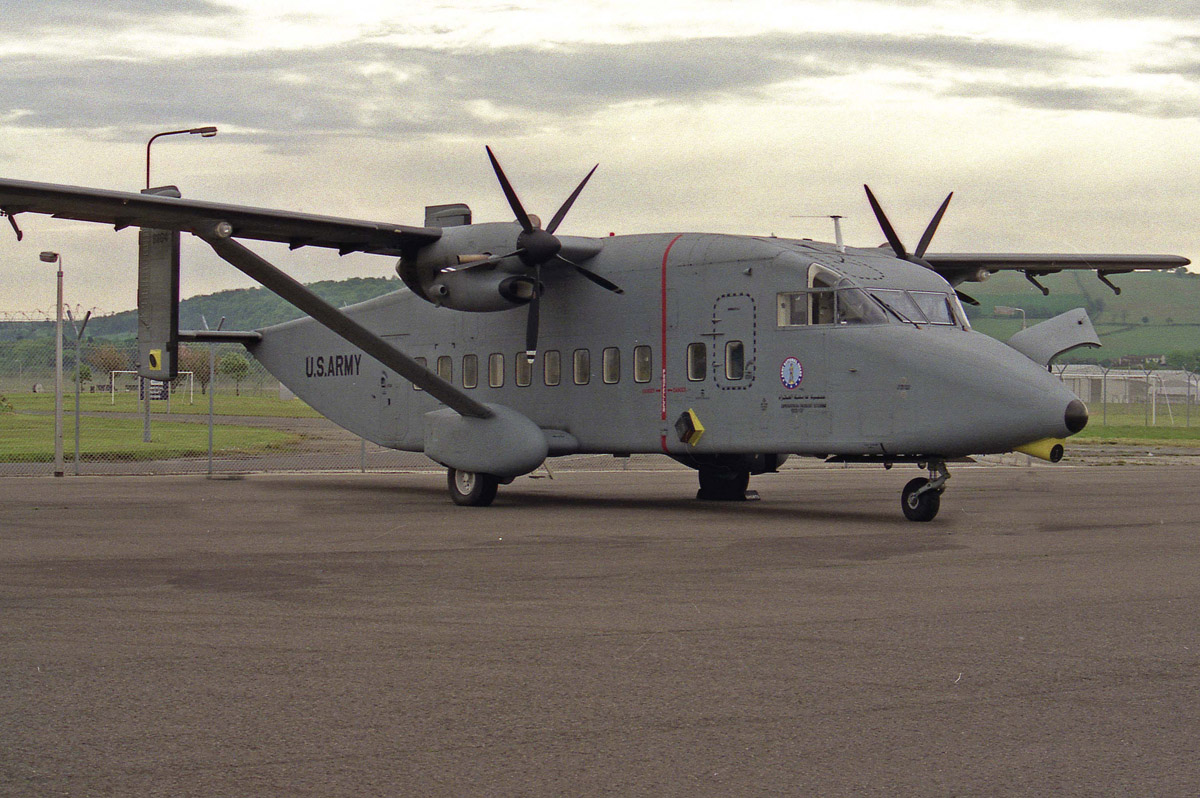 Shorts won the open competition conducted by the air force for eighteen (18) aircraft, beating out Spain’s CASA 212. Both companies became involved in a fierce political battle in Washington, DC to win. The air force designated the Sherpa as C-23A, and the eighteen (18) aircraft were delivered from March to December 1985. Shorts also handled logistics support for EDSA from a base at Zweibruecken, Germany. The system remained in place until the Berlin Wall came down in November 1989, and the U.S. military began to reduce its presence in Europe.

EDSA was disbanded in 1990, and the C-23s were sent back to the U.S., with six aircraft going to the army, two to the air force’s test pilots school at Edwards Air Force Base, six to the Bureau of Land Management, and four to U.S. Forest Service.

The next model to be developed was the C-23B. This variant was powered by PT6A-65AR, a larger engine than on C-23A, used the wingbox and landing gear from the Model 360-300 (to permit higher gross weight), and featured a rear ramp that both opened down on the ground and up into the aircraft during flight – permitting paratroops to jump out of the aircraft in-flight and aerial dropping of cargo. The aircraft had greater payload, range, and performance than C-23A.

The first buyer of C-23B was the U.S. Army National Guard (ARNG), which signed a contract for fourteen (14) aircraft in 1989. The guard wanted the aircraft to assist pick-up and distribution of major parts and assemblies for its rotary wing fleet from six Aviation Classification Repair Activity Depots (AVCRADs) located around the continental U.S. C-23Bs replaced the ageing C-7 Caribou (de Havilland of Canada’s DHC-4), holdovers from the Vietnam War. Each AVCRAD was responsible for supporting ARNG rotary assets in up to eight surrounding states. C-23Bs were dispatched on continual logistics missions to guard bases, picking up and dropping off rotary blades, tail booms, engines, auxiliary power units, and other major components. Logistics support for these (and later C-23B+s) was provided by Shorts USA under contract to the army; the logistics base was in Bridgeport, West Virginia.

The final model of the Sherpa was the C-23B+. ARNG was able to secure funding for additional aircraft beyond the first fourteen (14) for its AVCRADs to fill other validated wartime missions. But, following the purchase of Shorts by Bombardier of Montreal, Canada, the decision had been taken to stop building whole aircraft in Belfast. The U.S. Congress had voted additional funds for more aircraft in the meantime, however, so it was decided to ‘build them used, if we couldn’t build them new’.

Used Model 360-300 passenger aircraft were purchased in the open market and modified to C-23B standard at the West Virginia Air Center (WVAC) in Bridgeport. New tail sections were built at de Havilland in Downsview, Ontario, and shipped to West Virginia. Meanwhile, Model 360-300 fuselages were cut forward of the wing and a section removed to conform to the shorter C-23 length. Twenty-eight (28) C-23B+s were remanufactured at WVAC from 1994 to 1996 and delivered to ARNG. These aircraft were organised into four Theater Aviation Sustainment Maintenance Groups located around the U.S. 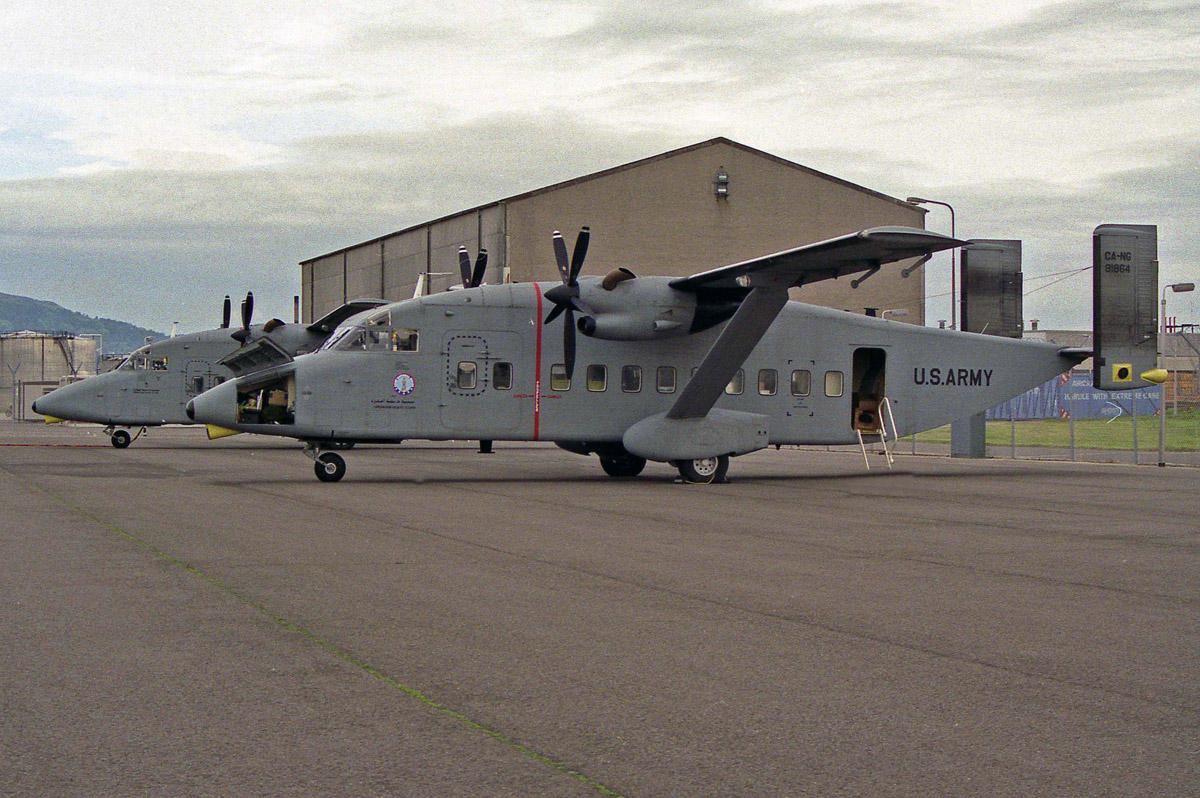 The U.S. Army and Army Guard continued to press C-23B/B+ Sherpas into service in the Middle East, sending up to eighteen (18) aircraft to Iraq during Operation Iraqi Freedom and to Afghanistan during Operation Enduring Freedom to search for improvised explosive devices and hauling personnel and cargo – up to one-half million pounds of cargo per month. The aircraft also performed many missions in recent years beyond its U.S.-based AVCRAD duties, including relief following 1998 Hurricane Mitch in Honduras, the earthquake in Haiti in 2010, the Deepwater Horizon oil spill in the Gulf of Mexico in 2010, forest fires/flooding/blizzards in the U.S., support for U.S Army Special Operations and Navy SEAL Team 7, and on-going missions for the Multi-national Force and Observers’ peacekeeping requirement to ensure compliance with the Israel-Egypt peace treaty.

The Army Guard announced in early January 2014 that its fleet of forty-two (42) C-23Bs and C-23B+s were to be retired from active service after over twenty years of operation. Budget cutbacks make the Sherpas un-affordable – notwithstanding operating costs that are a fraction of CH-47 Chinooks and C-130s. The aircraft had become an integral part of the army’s fixed wing component and will be missed by users worldwide. The U.S. Forest Service has announced it will take fifteen (15) C-23Bs, to complement the four (4) C-23As from EDSA. One can’t help believe other organisations – either government or civil – will pick up the remaining Sherpas now stored in the desert and put them back into the sky.