Aer Lingus has unveiled a bumper 2023 summer schedule which will see it fly to 53 European destinations from Ireland, 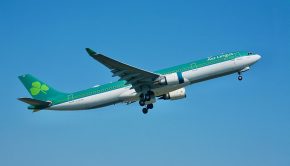 The first Aer Lingus flight to Miami for two and half years took off from Dublin Airport shortly after 4.00

Aer Lingus has announced that they will significantly increase its services from Belfast City Airport to London Heathrow, Manchester, and