ASL Aviation Holdings has completed the extension and upsizing of its existing debt facility with Goldman Sachs. The agreement builds

ASL Aviation Holdings has confirmed an order with Boeing for up to 20 additional 737-800 Boeing Converted Freighters (BCF). The 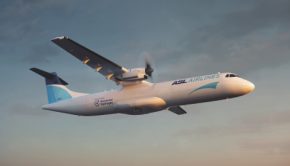 Universal Hydrogen Company, the US-based company leading the fight to decarbonise aviation through the adoption of hydrogen as a universal

ASL Aviation Holdings have announced the appointment of Fergus Wilson as ASL’s Group Fleet and Leasing Director. Fergus has joined

ASL Aviation Holdings has announced its newest addition to their stable with the establishment of ASL Airlines UK. ASL Airlines