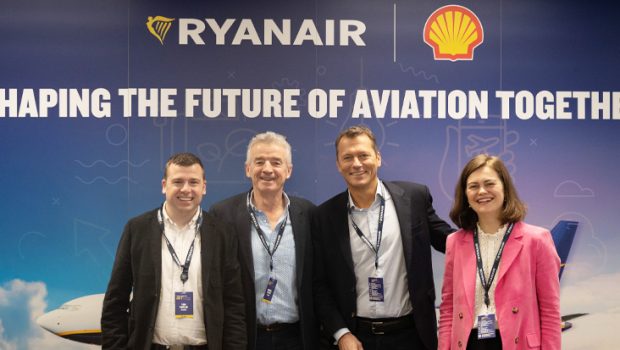 On Thursday Ryanair and Shell, signed a Memo of Understanding (MOU) to advance the supply of sustainable aviation fuel (SAF) at over 200 Ryanair airports across Europe, with particular focus on SAF supply at RYR’s largest bases like Dublin and London Stansted.

While SAF is a key enabler of aviation decarbonisation, it currently accounts for just a small fraction of worldwide jet fuel usage. This agreement with Shell gives Ryanair potential access to 360,000 tonnes (120m gallons) of SAF between 2025 and 2030, saving approximately 900,000 tonnes in CO2 emissions (equivalent to over 70,000 flights from Dublin to Milan). The SAF that is covered by this MoU could potentially be produced from multiple different technology pathways and a broad range of sustainable feedstocks.

This agreement, which was signed at the Sustainable Aviation Research Centre in Trinity College Dublin (TCD), demonstrates both Ryanair and Shell’s commitment to work together to invest in SAF supply fuels. Ryanair has set itself ambitious targets of 12.5% SAF by 2030 and net-zero emissions by 2050.

Speaking at Ryanair’s Sustainability Day in TCD, Sustainability Director, Thomas Fowler said: “SAF plays a key role in our Pathway to Net Zero strategy, and also our commitment to a target of 12.5% SAF by 2030. Today’s agreement with Shell helps Ryanair secure access to c.20% of this ambitious goal. Shell is a key sustainability partner for Ryanair, and we look forward to building on this collaboration with Shell as our Group grows sustainably to carry 225m passengers annually by FY26.”

President of Shell Aviation, Jan Toschka, added: “It is fantastic to build on our existing relationship with Ryanair to now look at what we can achieve together on sustainability. This initial agreement demonstrates that both companies recognise that SAF is the key to unlock a net zero future for aviation. We share the same ambition to enable Ryanair’s passengers to fly lower carbon. Leadership and bold actions are needed to accelerate the decarbonisation of flight, and today’s announcement is a great example of this.”

10% Growth in Traffic in November