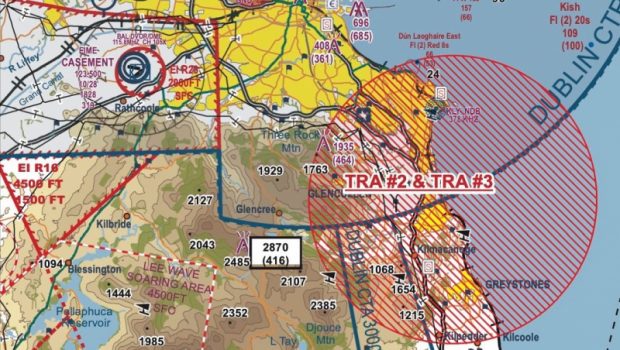 The IAA has published details of Air Navigation Restrictions in the vicinity of Bray, Co. Wicklow for Saturday July 23rd & Sunday July 24th for the Bray Air Display. A restriction (Temporary Restricted Area) on the flying of aircraft, including Unmanned Aircraft Systems (UAS) as defined in European Commission Regulation (EU) 2019/947, shall apply in the vicinity of Bray, Co. Wicklow, in the airspace contained within the under mentioned:

Unless otherwise directed by the air show organisers, aircraft operating at the air show shall use-Air/Ground Frequency 119.600MHz, and act in accordance with the information provided by the airshow Display Director except where Dublin ATC activates and notifies special contingency arrangements, where necessitated, for that portion of the TRA which lies within the Dublin CTR/CTA. The full notice is available to read here.