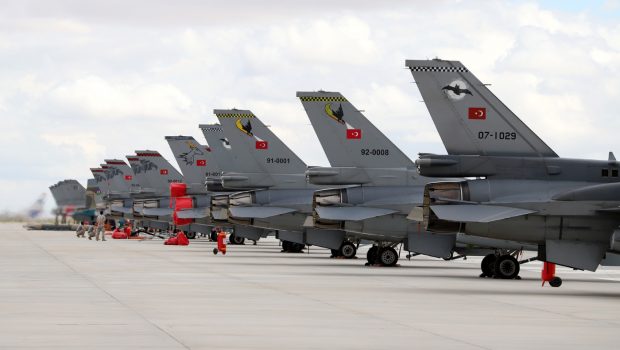 Anatolian Eagle 2022 took place at 3rd Main Jet Base in Konya, Turkey from 20th June to 1st July and Flying in Ireland were kindly invited to review the exercise. Anatolian Eagle is a dedicated training centre that provides joint training to Turkish & Allied Armed Forces personnel. The exercise is designed to test the pilot’s capabilities in multiple realistic combat scenarios, conducting air operations against simulated adversary aircraft.
The exercise area covers a vast area of 50,000 sq. miles of both land and sea and operates from ground level to 50,000 feet.

Since its inception in 2001, there have been 37,329 participants using 3,055 aircraft with participants from 15 NATO countries and other participating countries such as Israel, Qatar, UAE, and Saudi Arabia.
During this year’s exercise a total of 274 sorties by 48 aircraft and 1335 personnel. Alongside aircraft from Turkey, Anatolian Eagle 22 saw participant aircraft from Azerbaijan (two Su-25 Frogfoots), Jordan (three F-16s), Pakistan (six F-16s) and finally the UK sent a quartet of Typhoons from their temporary deployment in Romania. In addition, a number of countries, including South Africa sent observers to the exercise.

Widely reported in the media, Bayraktar UAVs have been gaining a formidable reputation from operations in Ukraine. Demonstrating strength in this area, Baykar sent the fifth prototype of their twin engined Bayraktar Akinci UAV to Anatolian Eagle 2022. The first full participation of UAV in the exercise. The Akinci undertook reconnaissance and maritime surveillance and target acquisition. Airborne control during the exercise was undertaken by the resident Boeing E-7Ts of 131 Filo supported by a NATO E-3A.

The author would like to thank the Turkish Air Force and PAO, Capt. Emrah Akbay and M.Sgt. Tevfik Cimen for their help and the great organization.

Turkish Air Force Commander General Hasan Küçükakyüz addressed the assembled staff and press.
The author would like to thank the Turkish Air Force and PAO, Capt. Emrah Akbay and M.Sgt. Tevfik Cimen for their help and the great organization.

All words and photos by Kenneth Meegan and Niall Grant