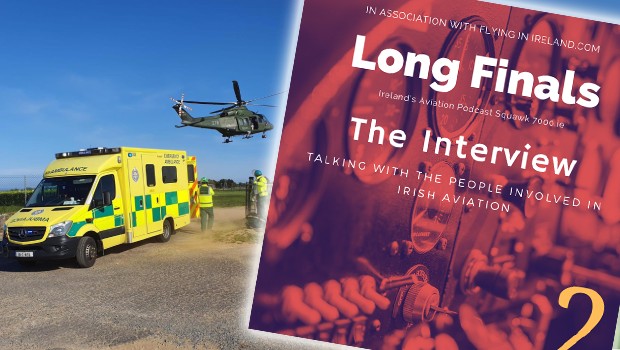 One of the greatest pleasures in bringing you this podcast is that we get to meet with people with a passion for what they do. This episode is no different as we are in Baldonnel with the Irish Air Corp as they celebrate not only 100 years of operation but, especially this week, ten years of the Emergency Aeromedical Service EAS

The Emergency Aeromedical Service (EAS), which has had a residence in Custume Barracks, Athlone, Co. Westmeath, is a joint project between the HSE and the Defence Forces. Air Corps flight crews work alongside National Ambulance Service Advance Paramedics in a dedicated military helicopter for the rapid transfer of critical patients to the most appropriate hospital in the country.

Initially set up in 2012 for a 12- month trial period, the aim was to assess the level and type of dedicated Helicopter Emergency Medical Service (HEMS) required in Ireland in light of recent closures of regional facilities such as Roscommon Hospital. Since its inception, it has become a vital asset in terms of critical pre-hospital care and has completed over 3500 missions. We speak with Commandant Oisin McGrath, Officer Commanding 301 Squadron, the (Tactical Helicopter Squadron). Lieutenant Colin Delaney, is currently a copilot on the AW139. Captain Jason Mc Dermott; the officer tasked with being responsible for the helicopter operation in Athlone, Sergeant Philip Byrne, Pat Moran and Tommy Monaghan both Advanced Paramedics from the National Ambulance Service and Sergeant Diarmuid Corcoran Crewman on the AW139.