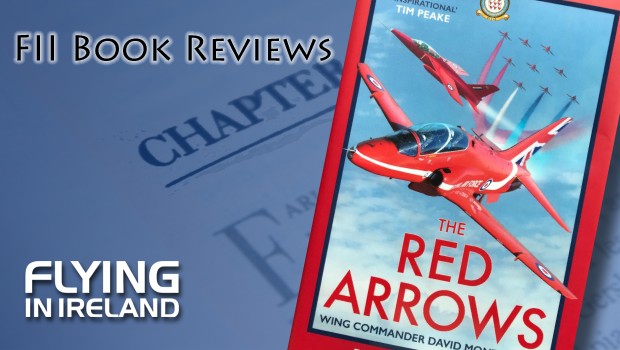 It is now more than 40 years ago but the images impressed in my memory during my two flights with the Red Arrows from RAF Kemble remain vivid and thrilling. I spent two seasons as Fixed-wing Air Displays Coordinator with the RAF Participation Committee, helping to arrange the programme, visiting the teams, going to air shows and taking as many opportunities to go flying as possible. The Red Arrows Team Leader back then was S/L Brian Hoskins, the Manager was S/L Ray Thilthorpe and the Adjutant was the ever-resourceful WO George Thorne, who was my main day-to-day contact. My personal experience with the team was that they were a very welcoming, friendly and down-to-earth bunch, making this young civvie feel valued. It was therefore with a degree of nostalgia and also of anticipation that I opened this well-produced and nicely-illustrated book.

The author can rightly be seen as a leading authority on the Arrows, having flown as a team member, (Red 3), then as part of the synchro-pair (Red 6 and Red 7), followed four years later by a tour as Team Leader (Red 1) and then latterly as OC RAFAT (Red 11). The book reflects multiple aspects of all those roles and give an absorbing and comprehensive account ‘behind-the-scenes’, mixing narrative history with very honest, and, at times, sombre and moving, personal reflections. All stages of his life with the Red Arrows are covered: the initial selection process, learning how to fly as a formation display pilot – the building blocks put together in the intensive but graduated pre-season training months and added to during the first season in the team; the testing challenges for the synchro-pair, the responsibilities as team leader, which involves unrelenting pressure (similar in a way to that experienced by the England cricket captain) and the vital individual contributions of the 115 strong team of pilots, engineers and support staff. He takes you through the preparation for a display in some detail, and also covers the demanding, far-flung overseas trips and special events. The accounts of flying in a relatively basic, short-ranged jet, with no air-to-air refuelling capability to, for example, Africa, the USA and China are fascinating. I was interested to note that the author considers the flat display, when there is a low cloudbase, more difficult than a full display. The work of ‘the Circus’ the engineers who travel in the rear seat of the Hawks to display venues to tend to the aircraft’s need between shows, is also given full recognition.

To his great credit, W/C Montenegro does not flinch from difficult topics – accidents,  fatalities and the pressures of the job, which requires not just flying skills of a high order but also personal qualities: social skills, media savvy, stamina, self-confidence (but not bravado) and the mental toughness to both give and take constructive criticism. As an early Red 1, the great S/L Ray Hanna once said, ‘thrill the ignorant, impress the knowledgeable and frighten no one.’ Make no mistake, it is one of the greatest, most rewarding flying jobs going but team members earn their kudos by sheer hard work, practice and dedication. The required standard of flying with precision is a considerable challenge for any pilot, no matter how well-qualified or experienced. The Team has flown almost 5000 displays since 1965, with 1292 being in the Gnat up to 1979. The author also provides two chapters giving useful potted histories of display flying in the RAF and a year-by-year chronicle of the Arrows.

As could be expected from a Red Arrow, this is an admirably skilled and professional piece of writing, what sets it apart is that it is written from the heart. Buy it, you won’t be disappointed.