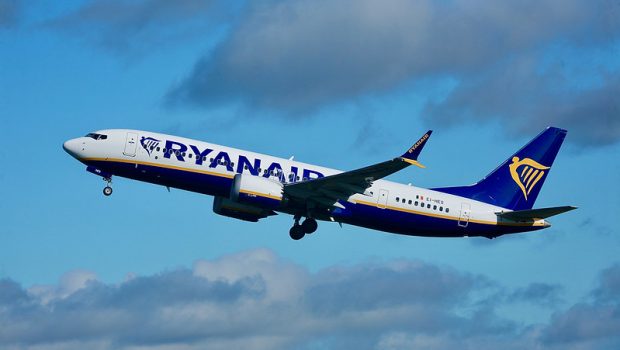 In addition to 15 new bases across the network, 770 new routes were announced and low-cost long term growth deals were extended at London Stansted, Milan Bergamo, Manchester), East Midlands and Brussels Charleroi.  The Group has doubled its capacity in Rome (FCO), Lisbon, Vienna and has based a record 33 aircraft in Dublin for S.22, launching the biggest ever Dublin summer schedule.

Commenting on the Group results, Michael O’Leary said, “Every consumer who switches to Ryanair from EU legacy airlines can cut their CO₂ emissions by up to 50% per flight. Over the coming 5-years, we expect our traffic to grow by 50% to 225m per annum. This growth will be delivered at lower fares but on a fleet of new B737 “Gamechanger” aircraft, which offer 4% more seats, yet burns 16% less fuel and reduce noise emissions by 40%. Our work with the EU, fuel suppliers, and aircraft manufacturers to accelerate sustainable aviation fuel (SAF) supply continue, in partnership with Trinity College’s Sustainable Aviation Research Centre.  Ryanair hopes to power up to 12.5% of our flights using SAF and cut our CO₂ per pax/km by 10% to under 60 grams by 2030. Last month we announced a partnership with Neste to power up to one third of our flights from Schiphol (Amsterdam) with a 40% SAF blend.  We expect to establish similar partnerships across our network over the coming years.  We are working with A4E and the EU to accelerate reform of the Single European Sky, to promote ATC efficiency and cut delays which will reduce fuel consumption, CO₂ emissions and flight delays. Ryanair published our “Aviation with Purpose” sustainability report setting ambitious environmental and social targets over the coming decade and mapping out Ryanair’s path to net carbon zero by 2050.  Our environmental strategy has enabled CDP to upgrade Ryanair’s climate protection rating to B from B- in Dec. 2021.  Our goal remains to achieve an “A” rating within the next 2 years.  Last month, Sustainalytics improved Ryanair’s ESG rankings to No.1 airline in Europe and the No.2 globally.”

Michael O’ Leary went on to look forward to the year ahead by saying, “While bookings have improved in recent weeks, the booking curve remains much closer-in than was typical (pre-Covid) at this time of year. The damaging impact of the Omicron variant and Russia’s invasion of Ukraine in February means that Q1 pricing continues to need stimulation. There is, however, pent-up demand and we are cautiously optimistic that peak Summer 22 fares will be somewhat ahead of peak Summer19 (pre-Covid) levels.  Ryanair plans to grow Fiscal Year 23 traffic to 165m (up from 97m in FY22 and 149m pre-Covid) and will pursue its load active, yield passive strategy to achieve this growth. While 80% of Ryanair’s fuel requirements are hedged well below current spot prices of over $100bbl, our unhedged 20% will give rise to some unbudgeted cost increases.”

To date, the Ryanair Group has taken delivery of 69 of their new Boeing 737-8200 ‘Gamechanger’ aircraft. Ryanair operate 31 of these aircraft, Buzz operates 13 and Malta Air has 25 in their fleet. The group is scheduled to take delivery of a further 21 between September and December 2022, with 30 to be delivered between January and April 2023.