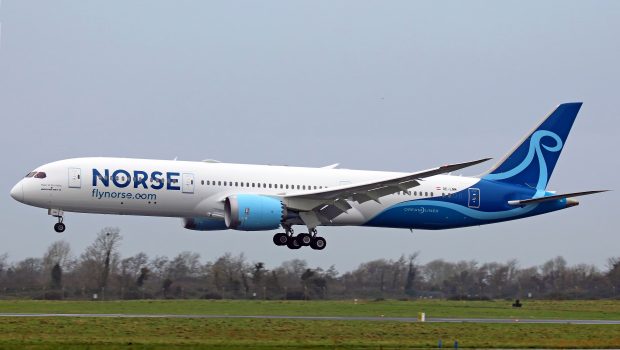 The new Norwegian long haul airline, Norse Atlantic Airways has taken delivery of its first Boeing 787-9 Dreamliner. They currently have several aircraft painted and awaiting delivery in Shannon with some currently on overhaul pending delivery. The arrival of the aircraft was celebrated at Oslo Airport and the new airline is on track to start transatlantic flights in spring 2022. The first aircraft to be delivered was flown in from Warsaw was operated by Norse’s own captains Kjetil Risan, Derek Spicer, Dean Kitchen and Ulf Heikmann. Norse’s first aircraft is a Boeing 787-9 Dreamliner and is one of six to be leased from BOC Aviation, with a further nine to be leased from AerCap. The airline’s aircraft will be named after popular national parks, and the first to be delivered is named Rondane (one of Norway’s largest national parks). Norse’s planned fleet of aircraft consists of 12 Boeing 787-9 Dreamliners and three Boeing 787-8 Dreamliners. The next deliveries will continue until April and all aircraft will be initially parked at Oslo Airport.

Commenting on their first delivery the CEO and founder of Norse Atlantic Airways, Bjørn Tore Larsen said, “The delivery of our first Dreamliner marks an important milestone for us at Team Norse as it brings us one step closer to the launch of attractive and affordable transatlantic flights. We believe that transatlantic travel will resume with full force once the pandemic is behind us. People will want to explore new destinations, visit friends and family and travel for business. Norse will be there to offer attractive and affordable flights on our more environmentally friendly Dreamliners to both the leisure and cost-conscious business traveller.”