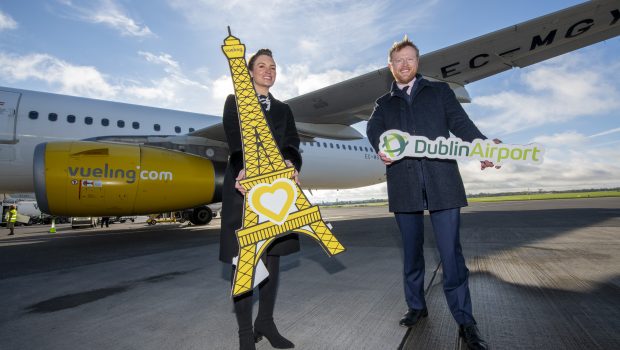 Spanish airline, Vueling has started two new Irish routes today with new services from their Paris Orly base to Dublin and Belfast International. The new Paris – Dublin route will be operated on a daily basis and will complement the airline’s service between Barcelona and Dublin. The flight is scheduled to depart from Orly at 11.20 with a 12.15 arrival in Dublin, the return flight departs at 12.55 with a 15.45 arrival back in Paris Orly. The inaugural service was operated by Airbus A321 EC-MGY. Incidentally, the same aircraft also operated the first service between Orly and Belfast International which also started later in the day. The new twice-weekly service operates on Tuesdays and Saturdays. The service to Belfast International departs Orly at 17.45 and arrive in Belfast at 18.35. The return flight will depart Belfast at 19.25 and arrive back in Orly at 22.15. Initially, both of these routes are confirmed to operate through to the end of March 2022.

Commenting on the start of the new service to Dublin, the Dublin Airport Managing Director, Vincent Harrison said, “Paris is a vibrant, beautiful city steeped with history and culture. Orly is the nearest airport to the centre of Paris and this announcement is exciting news for business and tourism interest at both ends of the route, as well as family and friends seeking to reconnect after a long time apart”.

Also commenting was Vueling General Counsel & Board Secretary, Yvonne Moynihan who added, “I am thrilled to take the inaugural flight to Dublin from Paris Orly with Vueling, linking two of Europe’s most exciting cities. In the aftermath of the pandemic, it’s great to be part of the revitalization of tourism in Ireland, and Vueling’s proposition will enhance travel options for both Irish and French customers. We are committed to offering our customers great customer service and value fares.”

The new service to Belfast is the first time that the International airport will have a direct service to both of the Paris airports. Vueling has also announced a new service to Cork which will begin later in November when the airport reopens to commercial traffic following the runway works.