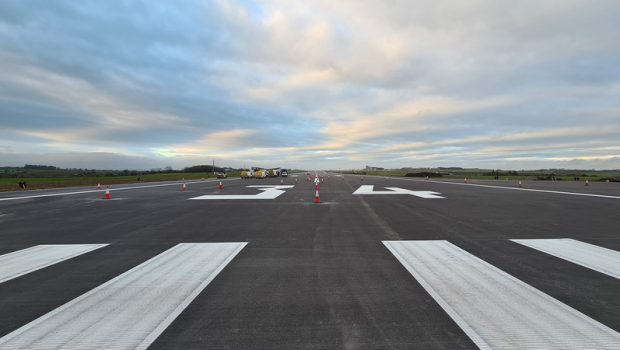 An Taoiseach Micheál Martin has officially opened the newly reconstructed main runway at Cork Airport. At a ceremony on the runway at Cork Airport, today to mark the completion of the fastest large-scale construction project undertaken in the State in recent years – 12 months from funding approval to the completion of the construction works – the Taoiseach was joined by Minister Hildegarde Naughton, Minister of State at the Department of Transport and senior cabinet members along with civic and business leaders to witness the result of the single biggest investment by any Government at Cork Airport to reconstruct a key strategic asset for Cork and the South of Ireland for the next 20 years.

Speaking at the ceremony held on the new runway, Taoiseach Micheal Martin TD, remarked: “It is my great privilege today to officially reopen the newly reconstructed Cork Airport runway and mark the successful delivery of the 10-week reconstruction project. This project future-proofs a critically important strategic asset for Cork, the southwest region, and for Ireland for many years to come. The investment by the Government of €10 million in this project will ensure continued, essential, connectivity – connecting people and places, families and friends, economies and businesses; with enormous benefits for the city, the wider region and for the country.”

Minister Hildegarde Naughton, Minister of State at the Department of Transport said: “Cork Airport is a key strategic national asset and all of us here today know the key role Cork Airport plays locally and nationally. Before the arrival of COVID-19 to our shores, Cork Airport was on a strong growth trajectory with over 2.6 million passengers recorded in 2019.  It has been connecting people, places, families and businesses for the last 60 years. The whole team here have been unwavering in their focus on recovery and building a successful future for Cork Airport.  This is clearly seen in the return of airlines and services to the airport along with new services such as the new weekly service to Geneva this winter operated by Swiss International Air Lines. KLM Royal Dutch Airlines will double its daily service between Cork and Amsterdam Schiphol from next week. I also welcome Ryanair’s announcement of a €200m investment in Cork Airport and a full recovery of its pre-pandemic passenger capacity with the reopening of its two aircraft base.  Government will continue to support Cork as it continues on its road to recovery from COVID-19. I hope to announce funding for Cork Airport as part of the Regional Airport Programme in the coming weeks. Our continued investment in Cork Airport demonstrates the confidence that I as Minister, and Government as a whole, have in the future growth of the airport and the region it serves.”

The Managing Director at Cork Airport, Niall MacCarthy said: “The massive runway reconstruction project was completed on schedule and within budget in a 10-week construction period, during which the airport made the brave decision to close completely to undertake the reconstruction works and be delivered in a quicker time, in a safer environment and with less long-term impacts on airlines and passengers than an alternative of night-time closures next year over a 10-month period next year.”

Over 430 people were employed by the main contractor Colas Limited, daa’s integrated delivery partner Bechtel and multiple sub-contractors including Atmac Construction, Atkins – a member of the SNC-Lavalin Group, Brooklyn Engineering Services, FLI Carlow and Lagan Asphalt Group on the project management, engineering, design and construction of the runway to complete the project on time.

“Today is a very proud day for everyone associated with Cork Airport. Rebuilding and reopening the new runway at Cork Airport is a major milestone on our road to recovery post-COVID-19. Rebuilding major infrastructure is always disruptive but we have confined the disruption to a short 10-week off-peak period and now we can reap the benefits of recovery. Seeing the quality of the finished product today is a testament to the tight teamwork undertaken by our airport team, our daa group team and all our skilled construction partners. We are very confident about the future of Cork Airport and, with your support as stakeholders, we will grow this airport back to be an engine of growth for the South of Ireland economy once again. We are renowned for our customer service at Cork Airport and from Monday, November 22nd nothing will please us more than welcoming our passengers back again,” Niall MacCarthy added.

Over 430 were employed in construction and supply jobs during the rebuilding of the main runway as well as the upgrading of the airport’s approach, airfield and ground lighting, runway edge and centreline lighting together with all its drainage and ducting systems.

In total, daa is investing over €40 million at Cork Airport over a three-year period between 2020 and 2022 to upgrade and enhance critical infrastructure to get ready for strong growth to take off from the end of November into 2022 and beyond. As part of this capital programme, Cork Airport is also investing in the construction of a new Electrical Sub-Station for the airport early next year.

All these investment projects have sustainability and green energy efficiency as a priority. The electrical upgrade will reduce the runway electrical carbon footprint by 70%. Cork Airport has recently completed an upgrade of its Hold Baggage Security screening system at the airport to ensure that checked-in baggage complies with the latest and highest international standards at a cost of over €12 million.