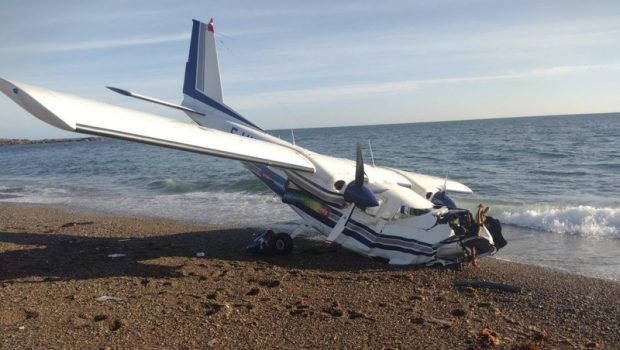 The AAIU has published the preliminary report into the accident involving Partneavia P68 F-HIRD near Carnsore Point Co. Wexford in September. The twin-engine aircraft, with one Pilot and three passengers on board, departed Waterford Airport (EIWF) at 11.08 hrs. All of the passengers were part of an environmental research team and the purpose of the flight was to record sightings of a variety of marine wildlife. During the occurrence flight, one passenger was seated in the front right seat next to the Pilot, and the two other passengers were seated in the row directly behind.

The Pilot advised that he switched on the fuel pump and pushed the throttle, fuel mixture and propeller levers forward, in an attempt to re-start the engine, which was unsuccessful. At the time of the right engine stoppage, the aircraft was travelling at approximately 108 knots. Recorded data shows that the aircraft then climbed to approximately 500 feet. The Pilot said he carried out the actions required to secure the right engine including feathering the right propeller. The Pilot noted that the left engine and left fuel quantity indicator at this point were stable. The Pilot decided to fly directly to EIWF which he estimated was approximately 20 minutes away. However, the Pilot informed the Investigation that he had difficulty gaining and maintaining altitude on one engine, and that he did not believe the left engine was delivering full power. He said that he verified that the left fuel selector and fuel pump were on, and that he moved the fuel tank cross feed to ON, waited and then turned it OFF again, but it did not make any difference to the engine power. He decided to fly close to the shore so that a forced landing could be carried out if necessary.

A full report will be published in due course. The full preliminary report is available to read here. Main photo above taken from the AAIU Report.