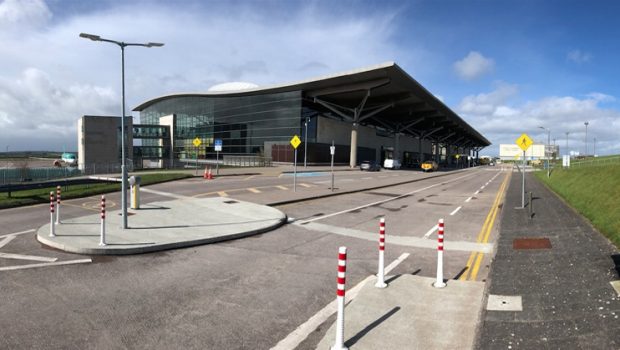 Cork Airport was opened on 16th October 1961. This six-part series by Gabriel Desmond has documented the scene there over nearly sixty years and offers some period photographs and reflections, decade by decade. Here is Part 6 – The 2020’s.

Cork’s passenger numbers peaked at over three and a quarter million in 2008, a remarkable growth. But there have been many ups and downs, due to the global oil crisis of the seventies, the boom and bust of the Celtic Tiger in the nineties and, of course, the Covid 19 collapse of air travel. Still, pre-pandemic passenger numbers for 2019 were two and a half million and rising, so the outlook is bright. Above – a deserted set-down area during the pandemic.

The Atlantic Flight Training Academy, founded in 1995 at Cork Airport is Irelands biggest flight school.  It now operates over twenty aircraft and trains aircrew for many international airlines. Their Diamond DA42 Twin Star and yellow Slingsby T67M Firefly are familiar sights in the skies of the training areas over County Cork.

Aer Lingus have always done their own aircraft ground handling but other providers have emerged under EU competition law. Servisair handle for Ryanair and some visiting private aircraft. Weston Aviation arrange fuel, FBO and business aviation services for a wide range of visiting aircraft including helicopters from their modern hangar complex on the north ramp. Here, Paul Daly, Operations Manager marshalls an Embraer Phenom 100 onto stand. The Phenom is one of the increasingly popular single-pilot VLJs – Very Light Jets – to appear in recent years.

In autumn 2021 the old main runway 16/34 is undergoing a major reconstruction over a ten week period. Photos released of the sixty-year-old surface show runway cracks with weeds, increasing the risk of FOD – Foreign Object Damage to aircraft, especially jets. A €40m project involves a structural overlay 150mm deep and complete upgrading of ground lighting and related electrical installations. This figure includes an improved baggage screening security system which alone cost €12m. The airport is closed to commercial traffic up to November 22nd. The alternative of fitting the works in at night over a later nine month period when the airport will be far busier was considered too disruptive.

Then and now. Photo left shows check-in at Cork in 1963 for a Cambrian Airways Douglas DC-3 flight to London Heathrow. There were then no security checks, no airport shopping or car parking problems. You could drop your car passenger right at the entrance only 10 metres from the check-in desk. There were just two flights a day to LHR. On right are check-in lines for Austrian Arrow ski flights to Salzburg in December 2006. Beyond are the busy Ryanair lines. This was before the days of bag drop and the ability to check-in online before leaving home or at an unmanned airport kiosk. That Saturday afternoon there were four or five outbound ski flights alone.

Today’s aviation business environment is a far cry from that of the early days of Cork Airport in the 1960s. It is one of stiff competition between airports, airlines and even surface transport. Air travel was then a novelty enjoyed by the well-off few. Today there are many millions of consumers who are well-informed, choosy and can arrange their own flights at a click. Cork Airport is well geared to serve those consumers and also thrive.

The author thanks all at Cork Airport for the great help they have given over many years.