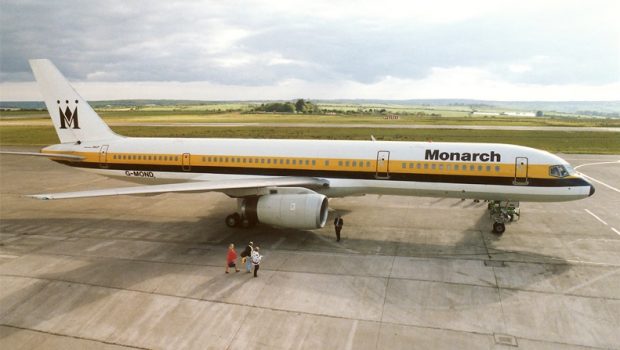 Cork Airport was opened on 16th October 1961. This six-part series by Gabriel Desmond has documented the scene there over nearly sixty years and offers some period photographs and reflections, decade by decade. Here is Part 5 – The 2010’s.

Cork Airport traffic grew steadily from the late nineties till 2008 when passenger numbers peaked at 3.25 million. But traffic then fell for seven consecutive years following the Irish banking scandals and property bubbles. Many airlines came and went. Monarch was based in Luton, England and often came to Cork operating for other airlines or on one-off charters. They ceased trading in 2017. This B757 G-MOND routed to Malaga in 1989. JetMagic was a new Cork airline founded in 2003 and flew two Embraer 145s and an E135 on business routes to Belfast, London City and Brussels. Later they added leisure routes such as Nice, Barcelona, Alicante and Rome. Some routes attracted good loads but JetMagic suddenly collapsed in January 2004. Many of their routes were later flown successfully by other carriers.

Cork Airport Police Fire & Rescue Service are constantly training to hone their emergency skills. This is aircraft fire training in 2004. A new fire training facility was opened in 2017. When a Manx2 Metroliner from Belfast crashed at the airport in 2011 the prompt rescue response undoubtedly ensured the survival of six passengers. Unfortunately, another six perished.

By the early 2000s, the 40 year-old airport was topping 2m passengers per year and bursting at the seams. The Sunday morning check-in queues for sunspot flights were stretching onto the outside pavement so a new bigger terminal and facilities were sanctioned. Flights were transferred to the new building in 2006. Above, Chief Airport Security Officer Ger Harvey and AFO Marc Lake observe the first arriving passengers to use the new terminal on 1st August 2006. The aerial photo shows the construction phase in 2004, centre, with the old terminal lower right. Beyond are the extensive car parks and the expanding  Cork Airport Business Park for which construction began in 1998.

The increasing Polish community in Ireland created new markets for air travel to eastern Europe. This A320 of the Hungarian airline Wizz arrives from Warsaw during a cold snap in early 2010. Ryanair also began to serve many Polish destinations. These parked B737-800s diverted to Cork due to heavy snow at other Irish airports. Cleared snow must be removed from areas near the runway where it could harden and become a serious hazard.