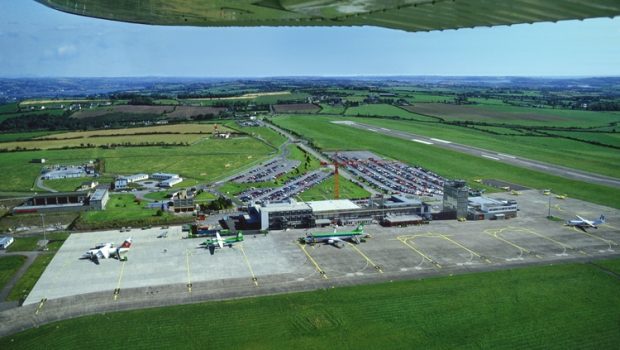 Cork Airport was opened on 16th October 1961. This six-part series by Gabriel Desmond has documented the scene there over nearly sixty years and offers some period photographs and reflections, decade by decade. Here is Part 4 – The 1990’s.

Passenger figures at Cork nearly tripled between 1991 and 2001. By 1991 the original terminal and ramp space had been extended, seen here to the left. The system of parking aircraft parallel to the terminal is very wasteful of ramp space so there was usually a shortage of parking slots. On the ramp are a BAe146 of Manx Airways,  a Fokker Fk50 and B737-400 of Aer Lingus and, far right, an FH-227 of Iona National Airways operating the growing overnight parcels service for DHL. Nowadays the whole green area beyond the new ramp is occupied by the present terminal, the huge  Business Park and two hotels.

These Fouga Magisters of the Irish Air Corps performed a formation flypast at Cork for the official departure of President Chiluba of Zambia from his state visit to Ireland in October 1995. Even their taxiing out for departure was a well-coordinated manoeuvre.

In May 1994  Aer Lingus brought their new A330 to Cork on a promotional visit. They flew invited guests on a low-level flight over coastal West Cork. Piloted by Captain Paddy Morrisey on left and Kevin Quinn, they flew down Bantry Bay at six thousand feet watched on right by Aer Lingus Executive Chairman Bernie Cahill, a native of Bere Island which is visible ahead.

Humble beginnings. Ryanair started Cork operations with a Luton route in 1987, using BAC One Elevens. Note the passengers boarding via the rear ventral airstairs.  British government approval of this route licence was not forthcoming so Ryanair initially flew the route with an intermediate touch and go at Dublin and onwards to Luton. Direct flights were soon allowed. In 1990 they were running a Kerry – Cork – Luton rotation using ATR42s. By 1993 they were switching to Boeing 737s and growing to become Europe’s biggest airline by passengers carried.

Cork’s only visit of the Russian airline Aeroflot was this Antonov An-26 in 1995 from Aberdeen. It wore the unusual red and white colours used in the Russian Arctic. The instrument panel labels are in the Cyrillic alphabet. Aer Lingus loaders employed their many skills to persuade its cargo of breeding pigs to disembark!