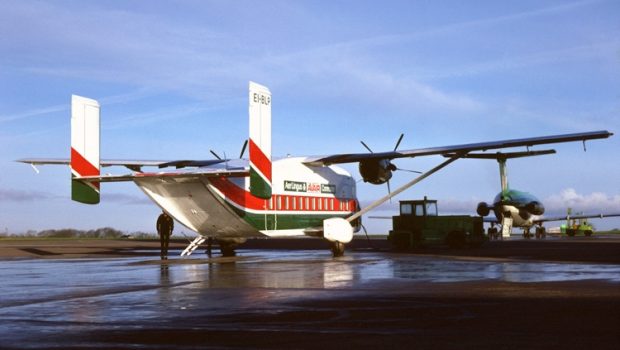 Cork Airport was opened on 16th October 1961. This six-part series by Gabriel Desmond has documented the scene there over nearly sixty years and offers some period photographs and reflections, decade by decade. Here is Part 3 – The 1980’s.

For many years Aer Lingus ran feeder services from Cork to Dublin and this offered southern passengers good onward connections. Avair, a private company started such commuter flights in 1982 with Shorts 330 aircraft and were quickly teamed with Aer Lingus on the route. Eventually, faster rail services and the new M8 motorway resulted in the ending of any Cork – Dublin air route. Photo from 1982.

The year 1985 was remarkable for unusual aircraft visitors to Cork. It was Cork City’s 800th anniversary and the year of the Air India disaster in the Atlantic. The MB339s the Italian Air Force display team “Frecce Tricolori” arrived on the Friday before a planned air show which unfortunately was cancelled due to low cloud cover. The sabotage of an Air India B747 in the Atlantic brought a large fleet of rescue aircraft to Cork. The many Sea Kings of the RAF and Royal Navy were supported by RAF Chinooks which used runway  25 for overflow parking.

Cork airport had long sought direct scheduled flights to North America and in the past decade, Norwegian flew to Providence RI for a while. But there had been earlier direct charters. This Cork scouting group is arriving from Baltimore MD in July 1990 on a Boeing 757  of American Trans Air.

The new longer-range twinjets such as the Boeing 737 MAX and Airbus A321LR have brought forward the possibility of future direct routes from Cork to North America.

Thanks to Kieran Frost of Aer Lingus for help with this series.