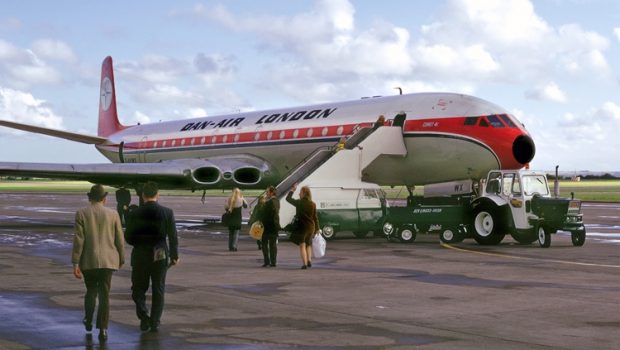 Cork Airport was opened on 16th October 1961. This six-part series by Gabriel Desmond has documented the scene there over nearly sixty years and offers some period photographs and reflections, decade by decade.

Aer Lingus and Cambrian / British Airways provided the bulk of scheduled services at Cork in the seventies. The occasional passenger charter flights included some de Havilland Comets of Dan-Air London who eventually managed to acquire the biggest of any Comet fleet by buying those which were withdrawn by BOAC and BEA, forerunners BA. This Comet 4C was on a charter by Ford Motor Company workers in Cork and Dagenham, Essex in August 1974.

The Kinsale Gas Field, just 50km offshore made Cork a base for helicopter activity from 1970 until 2021. The development phase of the late seventies was the busiest, with Irish Helicopters Limited hiring in helicopters from KLM and the Canadian firm Okanagan, whose Bell 212 is here lifting over their Sikorsky S61N. IHL later acquired similar machines and built an engineering base at Cork. In 2021 helicopter activity continued with the development of the huge Barryroe Gas Field.

By 1976 the sixteen-year-old terminal was handling over 270,000 passengers a year and an extension was needed. The metal framework for that is visible on right. In front is the small staff car park. The airport’s site on a plateau 150m asl near the ocean made it more prone to snow or low cloud than elsewhere locally. This resulted in a significant diversion rate until a Category Two Instrument Landing System was installed in 1986. January 1977 brought a cold spell but flights continued. However, the captain of a British Airways Trident from Heathrow described the taxi conditions as “bloody awful”! Cork then had excellent plane watching facilities from the front and roof balconies features sadly lacking at many airports worldwide today!

Some charters of the seventies catered for the export of calves to Italy. A Bristol Britannia of Aer Turas of Dublin and a Vickers Vanguard of Invicta. a British airline, at Cork in 1975. Both of these were freight conversions of former passenger turboprop airliners made prematurely obsolete by jet airliners such as the BAC One-Eleven and Boeing 737 which gave a faster and smoother passenger experience.