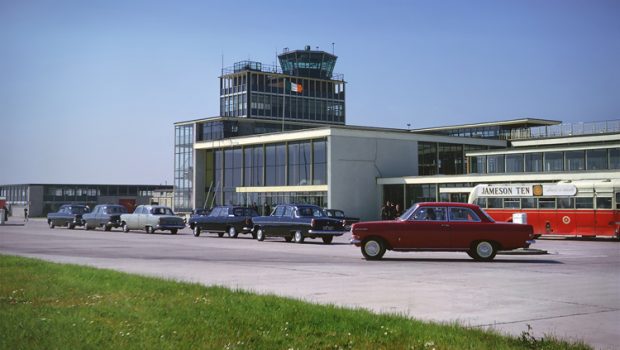 Cork Airport was opened on 16th October 1961. This six-part series by Gabriel Desmond has documented the scene there over nearly sixty years and offers some period photographs and reflections, decade by decade.

The cover photo shows Cork Airport in May 1964, with taxi rank dominated by Ford Consuls and Zephyrs, on left. This original passenger terminal was in use until 2006 and the control tower was replaced by a new one on the west side of the airport in 2009.

From the official opening in 1961, Aer Lingus began scheduled services, to Dublin and London Heathrow, using Fokker F27 Friendships and Viscount 800s. Cambrian Airways flew to their Cardiff base plus Bristol and Heathrow. They used DC-3s which were of the WW2 era. They were unpressurised and afforded passengers a less comfortable ride than the newer Aer Lingus turboprops. But the airlines didn’t have to fear competition because they alone operated under cushy government exclusive licences and “pooled” their revenues!

An Aer Lingus Friendship in April 1962. Work was still to be completed on the grass areas of the ramp and airfield and on the front balcony. But the public could watch the planes from the bar. This hostess got a rousing cheer from the open bar windows as she entered the terminal. The three ground hostesses were local celebrities as they often featured in the local newspapers.

Cambrian soon acquired Viscount 700s. This was July 1967. By now the airside lawns and rosebeds were mature and well tended.  In the early days, all ground handling was done by Aer Lingus.

Irish Shell has always been the airport’s fuel provider. Maurice Heston of Irish Shell & BP in his Bedford truck, 1964;   Refuelling a Beech Baron, 1966.