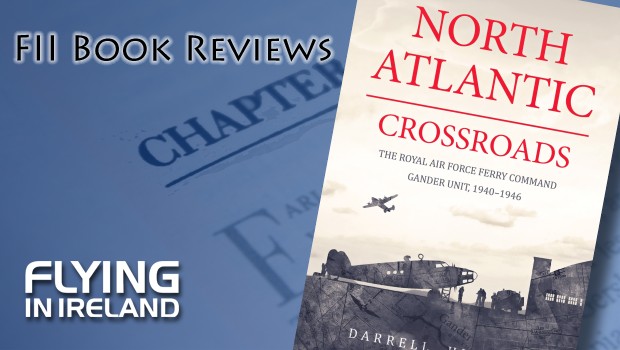 I first became interested in this important facet of aviation history a number of years ago, when the late Doreen Corcoran asked me to investigate the life of Belfast-born Joe Gilmore and make a recommendation to the Ulster History Circle regarding the placement of a commemorative plaque in Ardglass, where he grew up. This was duly done and it was subsequently a great pleasure to meet members of the Gilmore family, who had travelled over from Canada for the unveiling. My appetite thereby whetted, I researched further into the life of this remarkable man, who was instrumental in the success of the aircraft ferry service from Gander during the Second World War. In the course of this, I received considerable help from historians in Canada, and particularly Newfoundland. One of whom is the author of this book. The other important connection to Northern Ireland is the inaugural ferry flight of seven Lockheed Hudsons from Gander to Aldergrove in November 1940 – which the author relates in satisfying detail.

Gander’s geographical situation as the easternmost airfield in North America would prove its greatest asset. It was opened in 1939, being briefly known as Hattie’s Camp and was constructed to the highest technical standards of the time, with a view to being a major link in nascent transatlantic civil air services. With the onset of war, plans for civil aviation had to be shelved and Gander’s future was uncertain. Useful work soon came with RCAF anti-submarine squadrons and then, the development of a daring and very challenging aerial link between North America and Britain to bring vitally needed military aircraft purchased by Britain from the USA across as swiftly as possible by the most direct route. It was originally administered by the Canadian Pacific Railway Air Service Department (CPR) with considerable expert advice from former Imperial Airways (subsequently BOAC) staff.

This is an impressively well researched and written narrative history describing the progress, incidents, personalities, VIPs, infrastructure, the importance of accurate weather forecasting, the aircraft, the impact on the locality and the inevitable intervention of bureaucracy and politics. 1941 was a seminal year, with the British Ministry of Aircraft Production (MAP) taking over from the CPR, with the RCAF assuming control of airfield operations, RAF Ferry Command replacing the MAP, the first four-engine types being dispatched (B-17s and B-24s), numbers twice exceeding 100 per month, the advent of long-range Liberator transports bringing back crews from Prestwick on the BOAC return ferry service, the growth of US military aviation activities and, last but by no means least, the arrival of Joe Gilmore as maintenance supervisor. The absolutely vital co-ordination and co-operation of three air forces is well-described. This is by no means a dry account; with many fascinating stories, including those of the first Atlantic crossing by glider and also of the station piggery!

The work of Joe Gilmore’s repair and salvage crews is fully covered, tales of technical innovation, heroism and, at times, tragedy; as also is the assistance given to the local community, often in the most challenging of weather conditions. Further significant milestones are documented – 670 aircraft in 1942, 100 four-engine aircraft dispatched on a single day in 1943, Ferry Command being assumed into Transport Command, 200 aircraft in June 1944, 1375 in the year as a whole, with 166 return ferry flights. Aircraft types included Hudsons, B-17s, B-24s, Catalinas, Mosquitoes, C-47s, Mitchells, Bostons, Venturas and Marauders. 1945 brought very little slackening of the pace with 800 aircraft outbound between January and August, as well as 150 inbound RCAF Lancasters, returning via the Azores.

The final section of the book deals briefly with the resumption of civil aviation and a new role for Gander and its people. It is to be hoped that Darrell’s next book will take this story forward. I thoroughly enjoyed this very valuable addition to Second World War aviation history and would recommend it as an enjoyable and informative read.