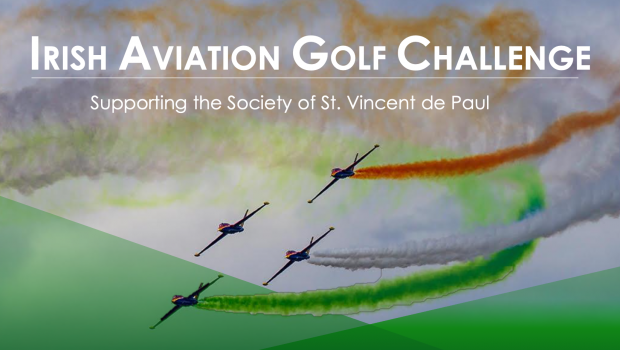 A record 152 golfers showed their support for the Irish Aviation Golf Challenge this year, now in its 22nd year raising funds for St. Vincent DePaul in Birr. The event has raised over €252,000, which is ring-fenced for education in the region. This year the event raised €15,000 and according to the organiser Captain Sé Pardy, the generosity of people this year has been exceptional given the circumstances of the pandemic. Other activities to raise funds have included publishing a selection of aviation photographs into a collection called Irish Air Spectacular. Golfers, who want to ensure to bring their A-game during such events, can put in the time practicing on a golf mat.

This year the aviation community in Ireland showed their support sponsoring the 18 holes of the course and by entering teams.

Marion Carter, a volunteer from Birr, Vincent de Paul, was at the event and expressed how important the event is as a fundraising effort. Marion also mentioned how this year, people who previously had donated to the organisation were now often requiring its help.

The weather remained fair, and other than a shower or two, the event ran like clockwork. This year, there was no prize ceremony. Still, the IAGC Cup will be presented to the 2021 winning team with a stellar score of 46.4, The Lusmagh Aviators – Barry Kelly, Steven Lonergan, Barry Harding and Steven Wynne. In second place representing CAE Parc- were Simon Kennedy, Alan Nugent, Peter O’Connor, and Sam Callaghan – with a score of 48.8 and in third place with a score of 49., Robbie Merrigan, Rita Barry, Steven Campbell and Fr Liam Merrigan.

This year the organisers commissioned a painting of the Birr Club House from Limerick artist Jim O’Farrell. The club’s Captains accepted in recognition of the support for the event over the last 22 years. 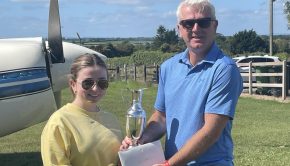 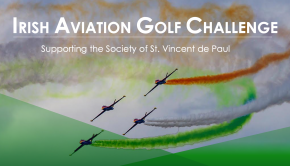