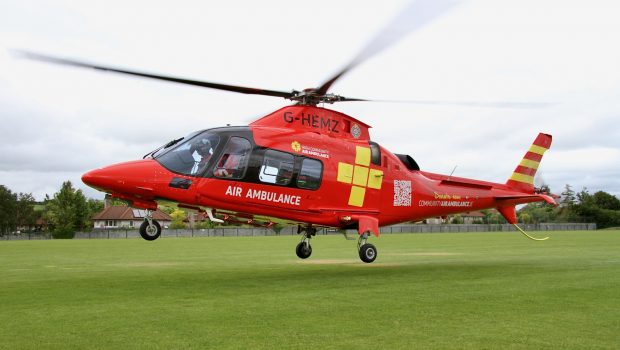 The Irish Comunity Air Ambulance (ICAA) newest helicopter, Leonardo A109S G-HEMZ, brought its first patient to Bishopstown for CUH on 23rd June and has been kept very busy since. It is based at Rathcool in north Cork, centrally located to serve patients across nearby counties in Munster and beyond. This charity air ambulance is tasked by The National Ambulance Service of the HSE and carries their logo on the engine fairing.

At first glance, the A109S looks similar to the E models previously operated by ICAA but much was changed in the Agusta redesign. Overall length is slightly longer and the cabin doors on both sides are much wider. The interior cabin is more spacious, greatly facilitating the loading and unloading of patients and administering to them in flight. Aerodynamically many subtle changes include a sleeker fuselage and improved horizontal tail stabilisers with downcurved tips. The main rotor blades are longer with a new angled tip. Maximum all-up weight has risen from 3000kg to 3175kg. Weight limitations with the E model in certain conditions of lifting and letting down no longer apply.

ICAA still retain A109E G-SHLS as their back-up helicopter. The advanced medical equipment and patient procedures available on both machines remain the same and operations can be switched between the helicopters in just a few minutes.

Air ambulance flights are tasked by the National Ambulance Service.  The Irish Community Air Ambulance is launching a fundraising drive with air-ambulance-week-2021, more details can be found here.