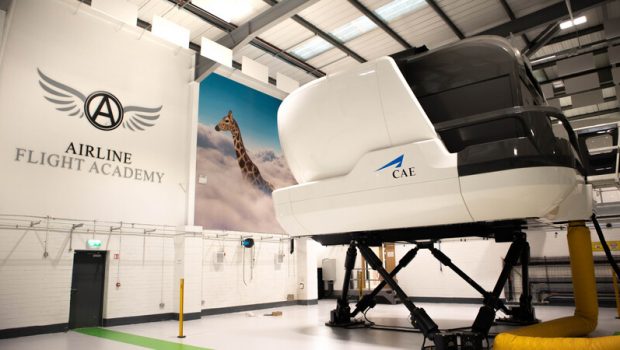 Airline Flight Academy (AFA) is a new venture based in Santry, Dublin offering a range of flight training services to the Irish and European aviation industry. In addition to the five simulators located at the Academy, the centre also boasts 14 large classrooms, Flame Aviation V7000  Fire Trainer, MPS FMS Trainers, 737 and A320 mock-ups, 6 briefing rooms and a 737 fuselage for flight crew and cabin crew training. There’s also a large rest area in addition to offices with related support services.

I got the chance to visit the centre while it was under construction last year and again more recently now that it’s fully operational. I spoke with Ingmars Kibermanis, the AFA Commercial Manager who showed me around the new facility and explained the services on offer. The most impressive aspect of the tour was the simulator hall that boasts five simulators. Three of these are Full Flight Level D CAE7000XR devices, which is the highest level of simulator available on the market. Two are based on the Airbus A320 and are configured to the latest Airbus 2.0 software standard. In addition, the sims include the latest EASA Issue 2 qualification allowing them to be used for Upset Prevention and Recovery Training (UPRT) in accordance with the latest EASA regulations.

The third full flight simulator is also a CAE7000XR device but this one is based on the Boeing 737-8200 – the variant purchased by the Ryanair Group. Even so, there are only minor differences in the flight deck between the -8200 and -8 and so the simulator can also be used for differences training or indeed type rating training for any of the MAX variants.

The CAE7000XR series is generally regarded around the world as the ‘Gold Standard’ for simulator training. Its electric motion system is much more economical to operate when compared to traditional hydraulic motion simulators and can still offer six degrees of motion giving realistic feedback to the crew. The 200deg x 40deg wrap-around visuals coupled with 4K projectors give a very crisp and realistic image. At the instructor operating station, the instructor has access to a wide range of controls via the two large touch screen monitors. From here, they can control everything such as the environment, aircraft system as well as the ability to choose from hundreds of malfunctions to train crew.

Stepping out of the full flights, towards the back of the sim hall, Ingmars shows me the two latest sims to be installed, a fixed base A320 and a fixed base 737-8200. Both of these devices offer a similar level of functionality to the full flight devices, just without the motion. This limits their use to the early stages of the type rating training but are incredibly useful for students teaching procedures and malfunctions where motion is not required. They can also be used for MCC and APS MCC training which Airline Flight Academy is selling to students across Europe and beyond.

As we continue our walk around the Academy, Ingmars tells me that Airline Flight Academy has recently secured agreement with Ryanair to be their exclusive Cadet Training provider and also a Ryanair Mentored approved training partner that can offer the “Ryanair Mentored APS MCC Course”. Ingmars explains the huge benefits to this programme for Ryanair mentored students versus the white tail option which include the fact the course is conducted with Ryanair Standard Operating Procedures (SOPs) by instructors specifically trained by Ryanair to teach the course. Not only that, successful graduates from a Ryanair Mentored Pilot Training Programme will get a guaranteed assessment with the airline as well as an exclusive fast-tracked recruitment process and will be given preference during initial selection – definitely a benefit in the current climate. As an aside, the Ryanair pilot recruitment team recently published figures indicating that pilots who complete their mentored scheme have a 98% success rate at their Cadet Assessments, this compares with 50% for non-mentored students.

As we continue our tour of the Academy, Ingmars goes on to tell me about the multitude of Boeing and Airbus products and services that Airline Flight Academy offers to airlines, aviation professionals and students across the world which include to name few, type ratings, APS MCC, JOC, TRI/SFI courses, LPC Revalidation / Renewal.

As we conclude our tour in the large rest area downstairs, Ingmars informs me they’ve had a very busy first few months despite the impact of the global pandemic. Ryanair have been using the 737-8200 simulator to complete the differences training, Ryanair Mentored APS MCC courses have been ongoing (Ingmars informs me that AFA’s mentored students Ryanair assessment success rate is 100% at the moment) and the A320 simulator has been used by a number of airlines and individuals on a wet and dry lease basis. All simulators are available for wet and dry lease by airlines or individuals. As we end our tour, I thank Ingmars for the visit and Ingmars informs me that you can contact AFA directly at training@Airline-FlightAcademy.com. The centre is very impressive – it’s worth a visit!