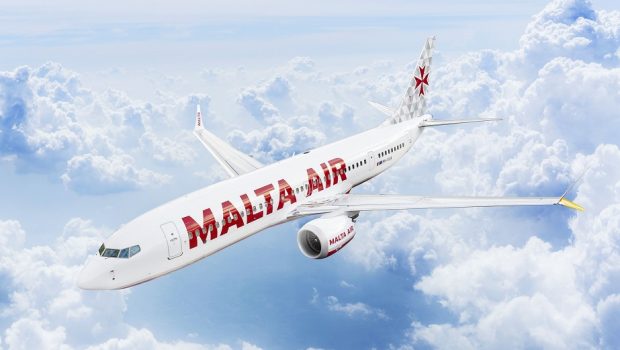 Ryanair Group subsidiary Malta Air received the first of the new Boeing 737-8200 aircraft to Malta today. The aircraft was welcomed to Malta by Transport Minister Ian Borg, Malta Air CEO David O’Brien, and Civil Aviation Director General Captain Charles Pace, who flew in on the first 737-8200 flight to Malta. The aircraft had been delivered from the Boeing facilities in Seattle direct to Dublin in recent days where it received some post-delivery work before flying on to Malta. The arrival of the aircraft in Malta Air colours was the first Ryanair Group aircraft to be delivered in colours other than the standard Ryanair scheme. Three more aircraft in Malta Air colours have also arrived in Dublin. These new aircraft carry 4% more passengers than the 737-800s, and reduce fuel consumption by 16% per seat, lower CO2 emissions by a similar amount, and cut noise emissions by 40%. They will enable the Ryanair Group to develop its environmentally friendly, great service, flights direct to Malta as it leads European aviation recovery. Malta Air will take delivery of two more Boeing 737-8200 aircraft in the next ten days. The Ryanair Group will then return to the standard delivery schedule of taking high numbers of aircraft during the winter months with 50 Boeing 737-8200 aircraft due for delivery between late September and Mach 2022.

Commenting on the arrival of the aircraft in Malta, the Maltese Minister for Transport, Ian Borg said, “I welcome this new Malta Air B737-8200 aircraft; the first, we hope, of many to Malta. This new aircraft added to the Malta register is a strong endorsement of the excellence and professionalism of Malta’s Civil Aviation Directorate. Direct air connections are vital to Malta and I am delighted that these new aircraft can deliver more connections and visitors to Malta, but at the same time reduce fuel, CO2 and noise emissions. Our mission is to build on the strong aviation platform we have developed, and we look forward to working with Malta Air and other airlines to further develop Malta as a leader in aviation and environmental excellence.”

Also commenting was the Malta Air CEO, David O’Brien who said, “Malta Air is proud to fly the Maltese Flag on our new “Gamechanger” aircraft. We wish to thank the Transport Malta – Civil Aviation Directorate for their professional and rigorous oversight of the introduction of the “Gamechanger” aircraft to our fleet. Our team of over 3,500 Aviation professionals at Malta Air will continue to work hard to secure as many of the Ryanair Group’s 210 “Gamechanger” aircraft orders as possible for Malta Air. We look forward also to growing our current 6 aircraft base at Malta substantially over the coming years and adding to the 57 direct Malta routes currently served by the Ryanair Group.