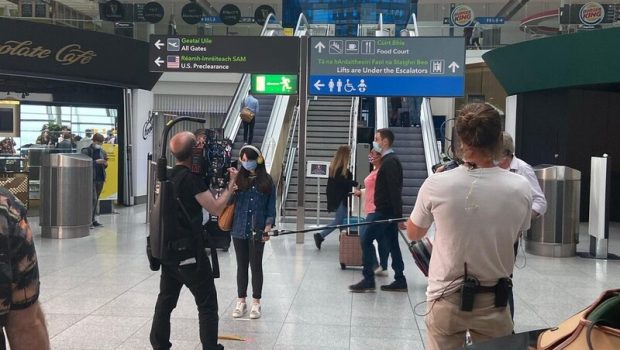 daa, the operator of Dublin and Cork Airports, has launched a new television commercial in advance of the return of non-essential international travel from Monday. The 30 second commercial is of heart-warming scenes which rekindle the joy of travelling by air again while delivering important reassurances to passengers.

The advertisement features several passengers about to take a flight to enjoy some long overdue and emotional reunions. Whether departing from Dublin or Cork Airports for the first time, or perhaps the first time in a long time, the commercial sets out to reassure passengers that daa staff are prepared and organised with the overarching message that ‘when you’re ready to go, we’re ready to help.’

daa Chief Executive Dalton Philips said: “While the past 16 months of severe travel restrictions have been in place to support the fight against COVID-19, the impact on airports, airlines and other businesses involved in international travel and aviation has been devastating. As we approach July 19th, we are looking ahead to rebuilding our business and supporting our industry. This advertising campaign marks this milestone and we hope it will remind people why we are a nation that loves to travel and that Dublin and Cork Airports are ready to welcome our passengers back through our doors when they are.”

A range of health and safety measures have been put in place at Dublin and Cork Airports to help protect passengers as they embark on their highly anticipated travels. Comprehensive operational readiness plans have been deployed in recent weeks in advance of the reopening of leisure and business travel.

The new television commercial, which was brought to life by leading Dublin advertising agency ROTHCO was produced by Speers Films, directed by Tom Merilion with postproduction at Windmill Lane. Singing sensation, Loah, of Irish-Sierra Leonean origin, sets the tone perfectly, providing a contemporary Irish twist to the Harry Nilsson/Fred Neil classic “Everybody’s Talkin.” The music arrangement for the commercial was presented by John Walsh.

The advertisement will air on RTE, Virgin Media and Sky this Sunday and will be broadcast over an eleven-week campaign until the autumn.

Pre-Covid, Dublin Airport welcomed a total of 32.9 million passengers, making it the tenth largest airport in the European Union. It had flights to more than 190 destinations in 42 countries operated by almost 50 airlines. In 2020, passenger numbers declined by 78% to almost 7.4 million due to the impact of the pandemic. Dublin Airport currently has 36 airlines flying directly to over 130 international destinations.

Cork Airport had 2.6 million passengers in 2019, which was an increase of 8% on the previous year. This made it the Republic of Ireland’s second-largest airport and the fastest-growing airport on the island of Ireland. Pre-Covid, Cork Airport served 57 scheduled routes with 9 airlines. Passengers flying from Cork Airport can now choose from six airlines flying directly to a total of 20 Continental European and UK destinations.